The first weekend of the new month we decided to go to Tartu. The rest of the volunteers wanted to go in the evening, to go partying and stuff, so i took an early bus and there i was in Tartu before 10 in the morning with my hicking backpack, my camera and a new coat i bought in a second-hand shop. My plan was to walk randomly all over the city taking pictures. 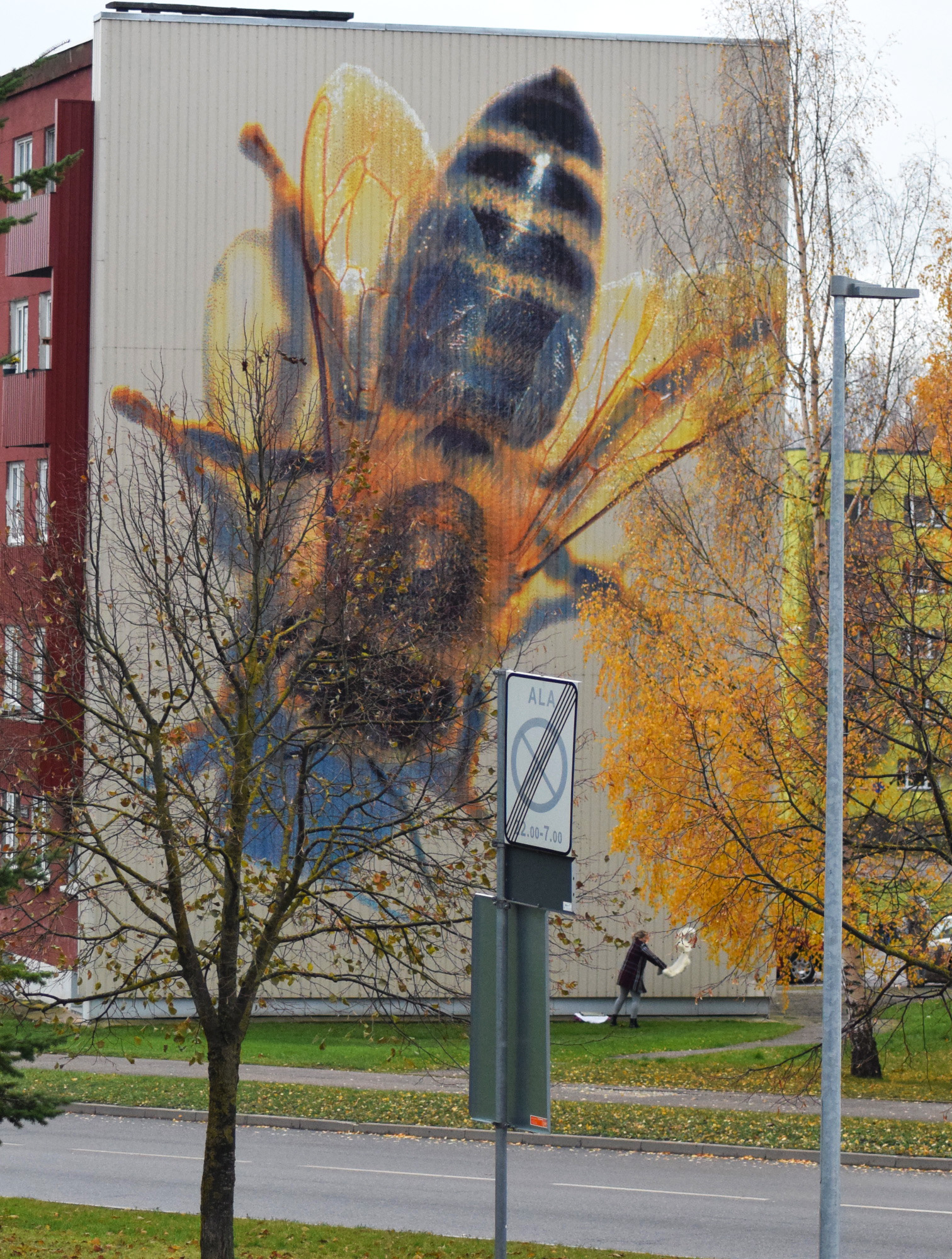 When i saw somebody shaking the sheets down a giant bee.

After hours and kilometers walking, i found the Natural History Museum of Tartu. I love natual history, and it was free, so i entered without doubt. There i saw a lot of minerals and rocks, fishes, insects, animal models and tons of skeletons (Nowdays and extinct animals). Very interesting. I continued exploring the city until 20:00 aprox, when my friends arrived. There wasn´t a fixed plan, so we went walking for many hours. At eleven in the evening i felt like at 3:00 or something. And the night was just about to start. Actually i don´t remember very well what we do and how many hours we went to each place, because my watch decided it was time to die (or to become crazy) and it was being autoreseted every few minutes so, for me, everytime it was 00:XX. Also, my coat´s zypper decided it was the best moment to stop working, so i couldn´t close it. I was sleepy and cold. I think the feeling i had must be simmilar to be a zombie. When the sun was rising again, very early in the morning, we went to McDonalds. Then, we had a early breakfast. Afterwards, we fell asleep over the table. After a couple of hours there, we took a train to our towns. When i got off the train, one my winter boots died suddenly 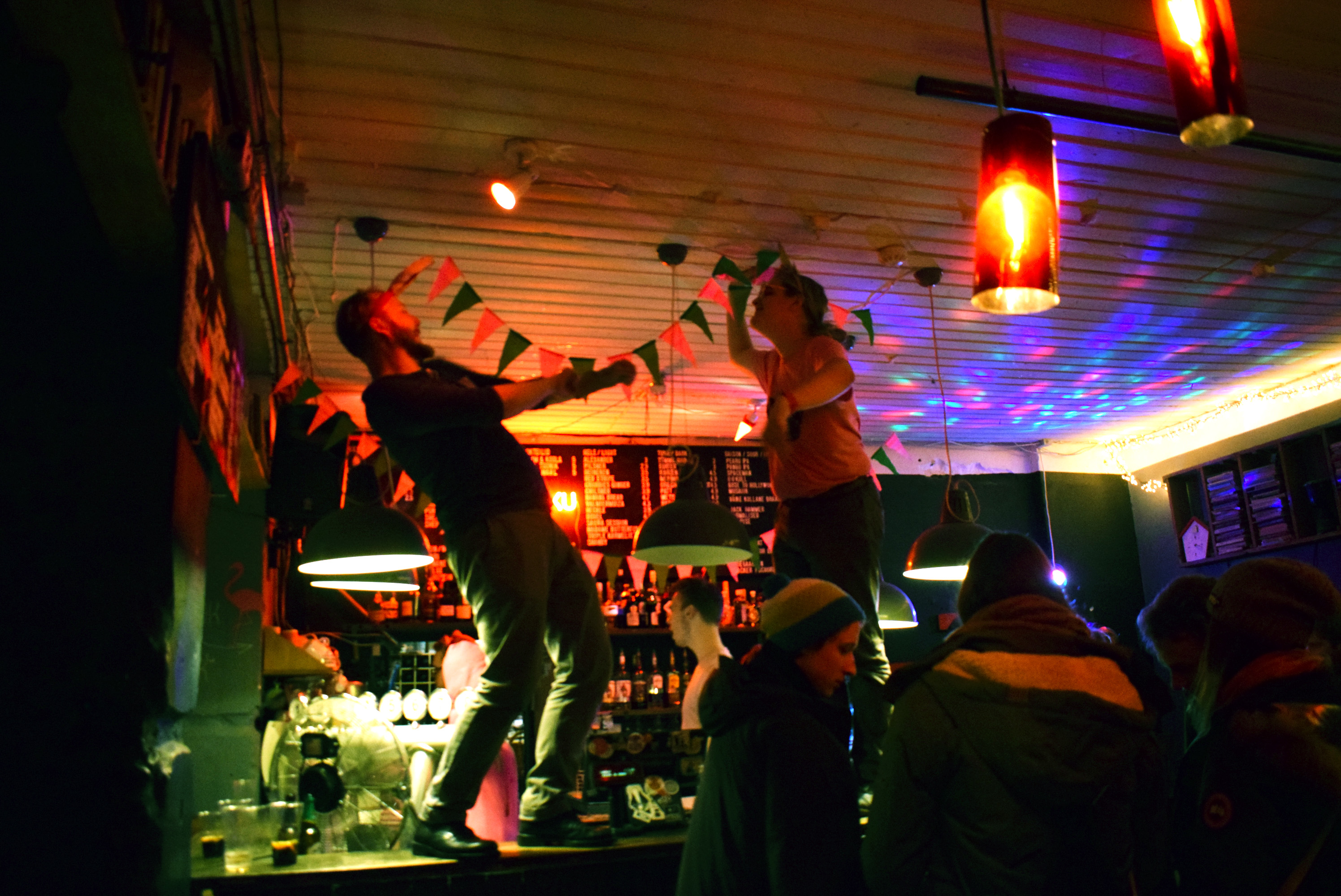 The party in one of the places we went that night

Next weekend, it was time to stay in Tõrva. There was a lot of events and things, so we couldn´t miss them. On friday afternoon Melina came and, with Artemis, we went to a friends flat (Taavi and Merilin) to try the sauna and play some boardgames. It was such a funny event. At eleven, we went to Pubi Juudas because there was a concert of a band i didn´t know just a couple of days before (i mean before of the concert), but that i already love at the moment: Frankie Animal. It was a very nice concert, i wish i can watch them live again. Next morning, Katharina came from Võru, and we went all together to visit the Helme Castle and the caves. I had been before, in September, in the castle, but now it was much more beautiful. It might be because of the autumn. On sunday we stayed in Tõrva and in the forest around. 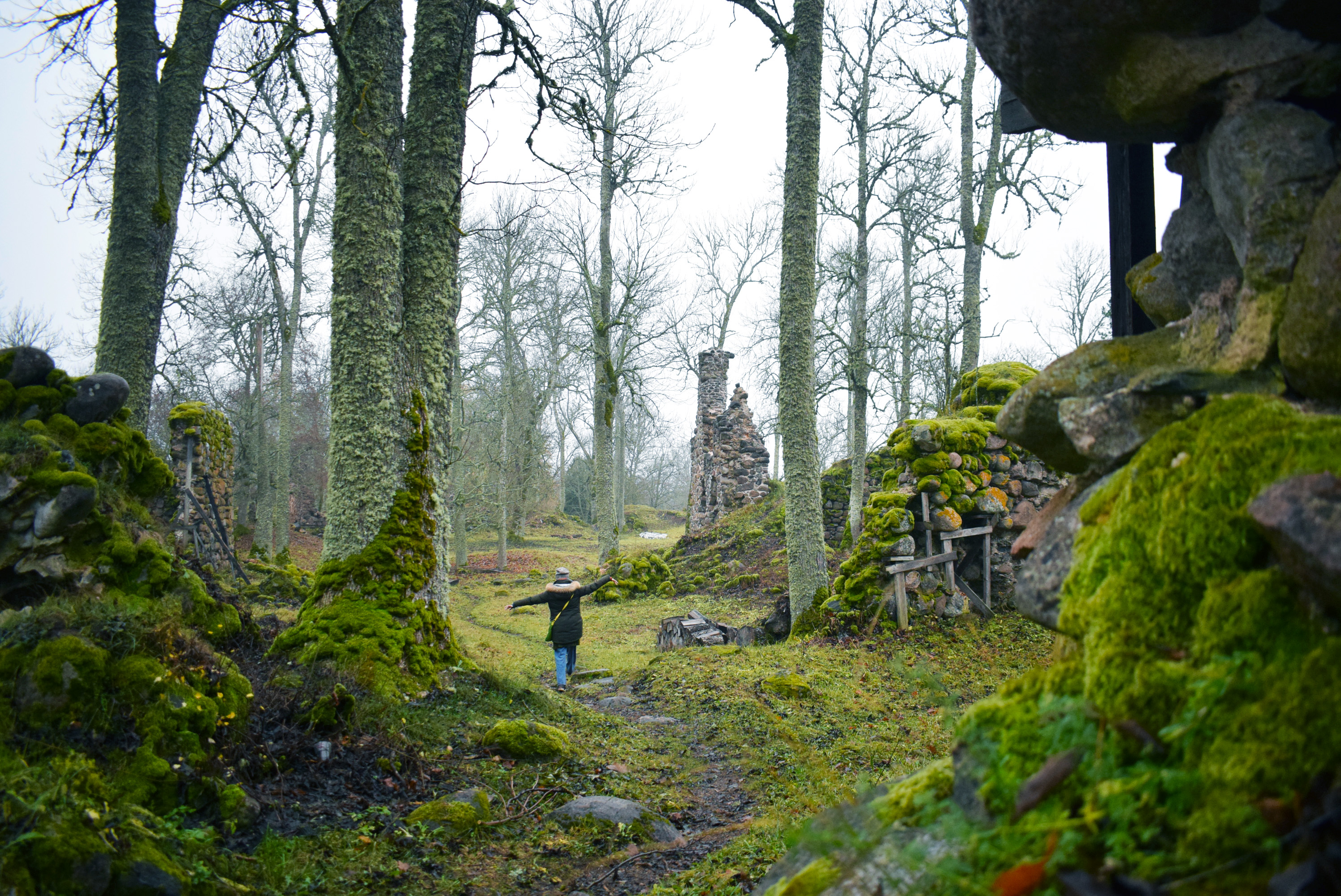 Finally, after some weeks, we could finally manage to go to Riga. It was not easy because it was the 100 birthday of the country in the same weekend, and there wasn´t many options left to go there -also our fault because we let it for the last moment-. But there we were on Saturday morning, with energy to explore the capital of a new country. We walked all over the city center, entering in every church and trying to find the organ. We could even enter inside one of the organs, because we were lucky to go there just when the organist was finishing to play. When it was dark, we went to almost all of the light shows there was all over the city. We walked a lot, and we saw beautiful and interesting things. We also manage to go to the top of one of the highest buildings: the Radisson Blu. Such a nice views from there. When we were tyred enaugh, we ended the adventure with a McFlurry. 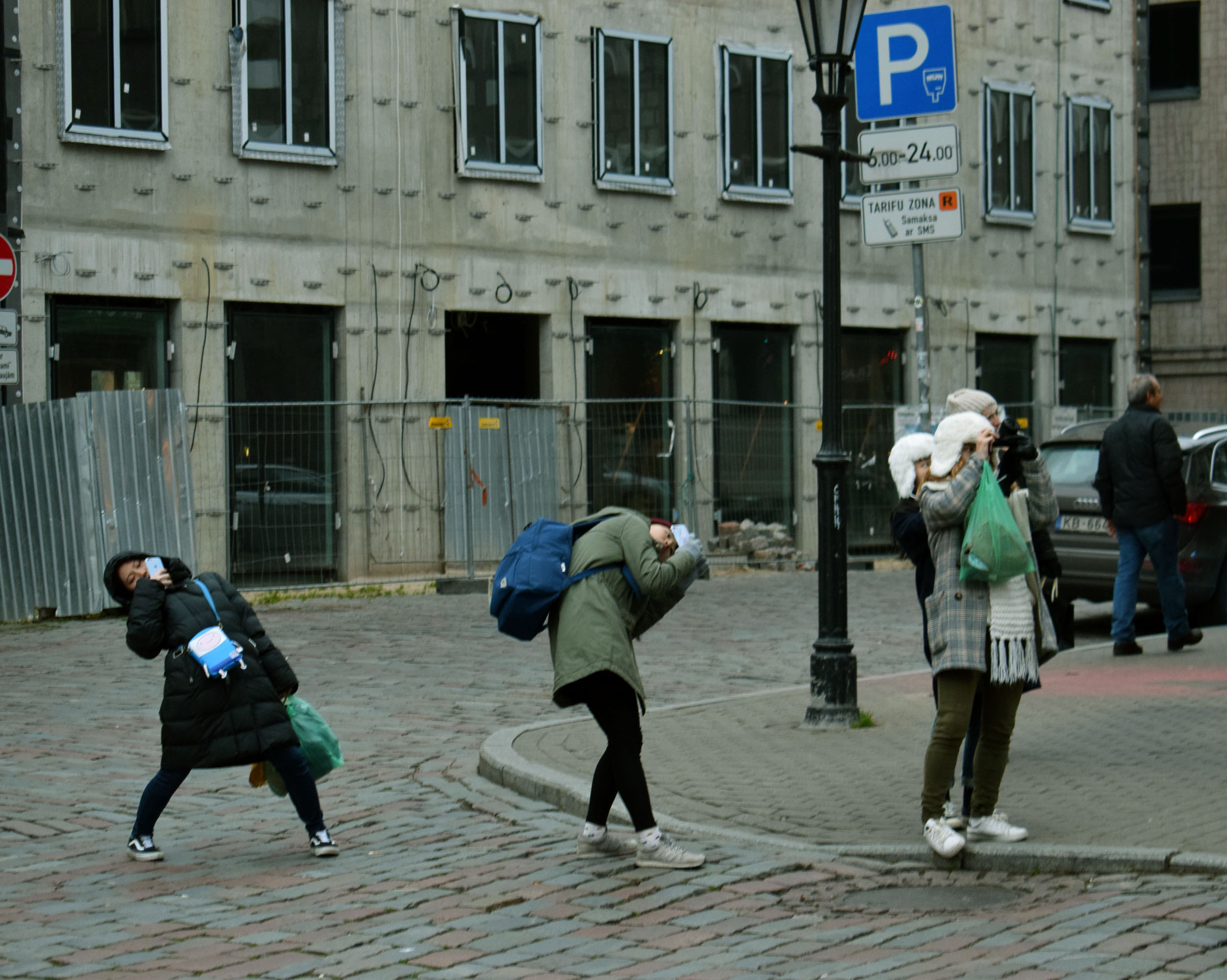 Next morning, Melina, Katharina and Anna had to come back to Estonia, so Artemis and me we went to the National Library. We were thirst for knowledge, we needed to study something. Nahh, we went there because it´s a pretty high building, and you can go to the top, so it was totally worthy. Afterwards, we watched the military parade. It was awesome to see such a big national event. When it was already dark, people was walking with torches, creating a beautiful image. 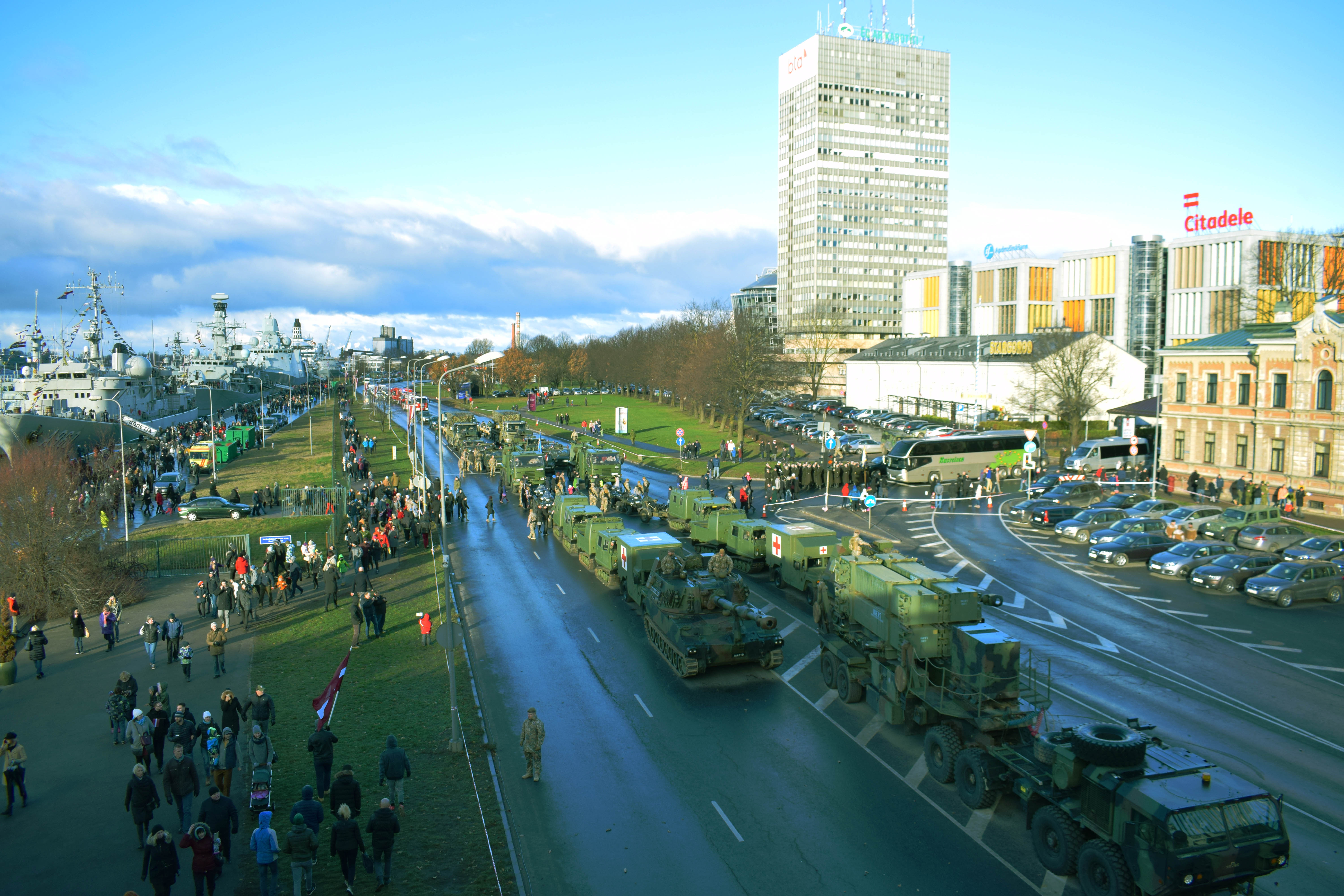 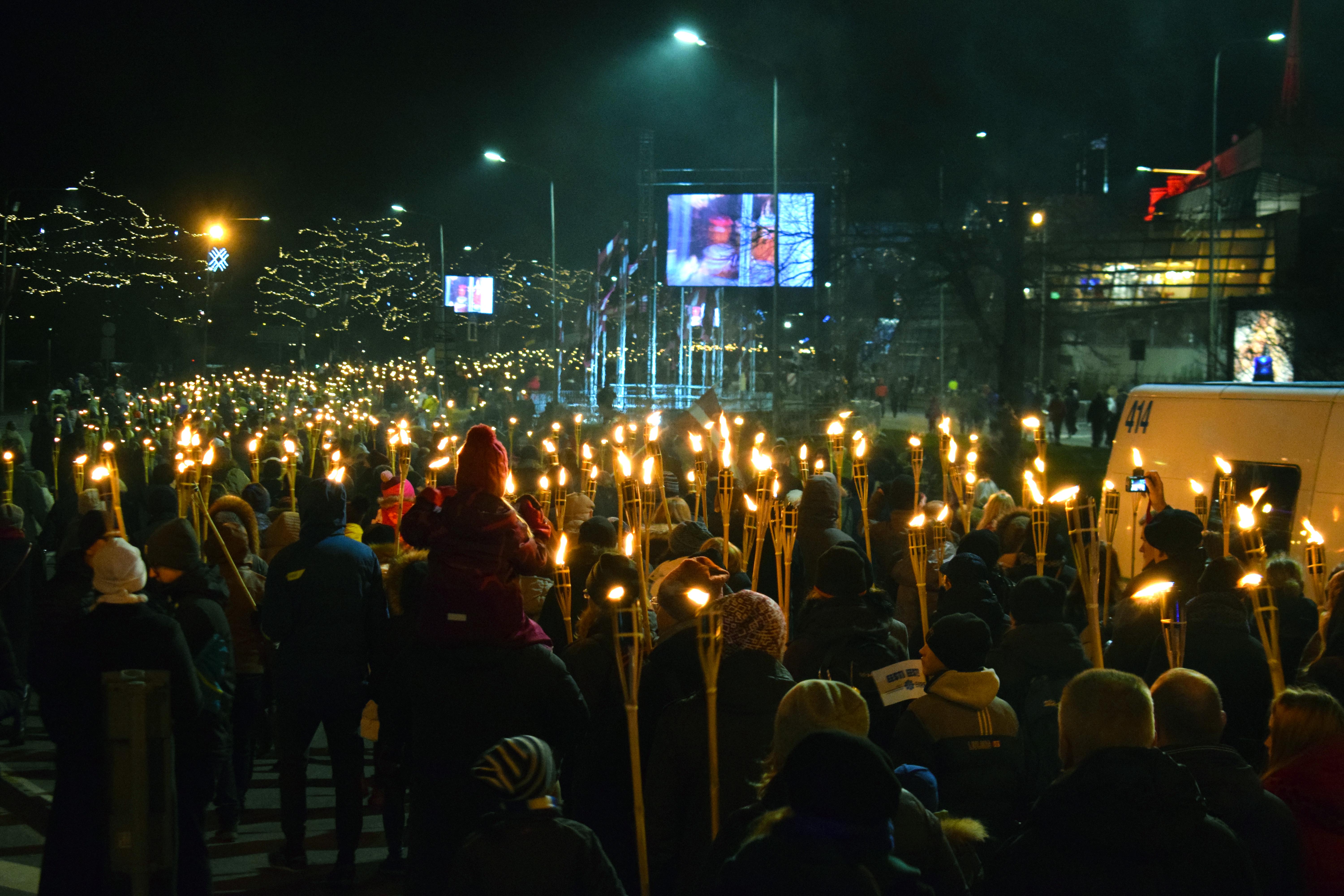 People walking with torches to celebrate the independence day

Painful. And funny, and stressful, and crazy. I left it after a headshot. But it was funny to see us dressed with the military clothes. The coldness also helped to feel more like in a real war situation. 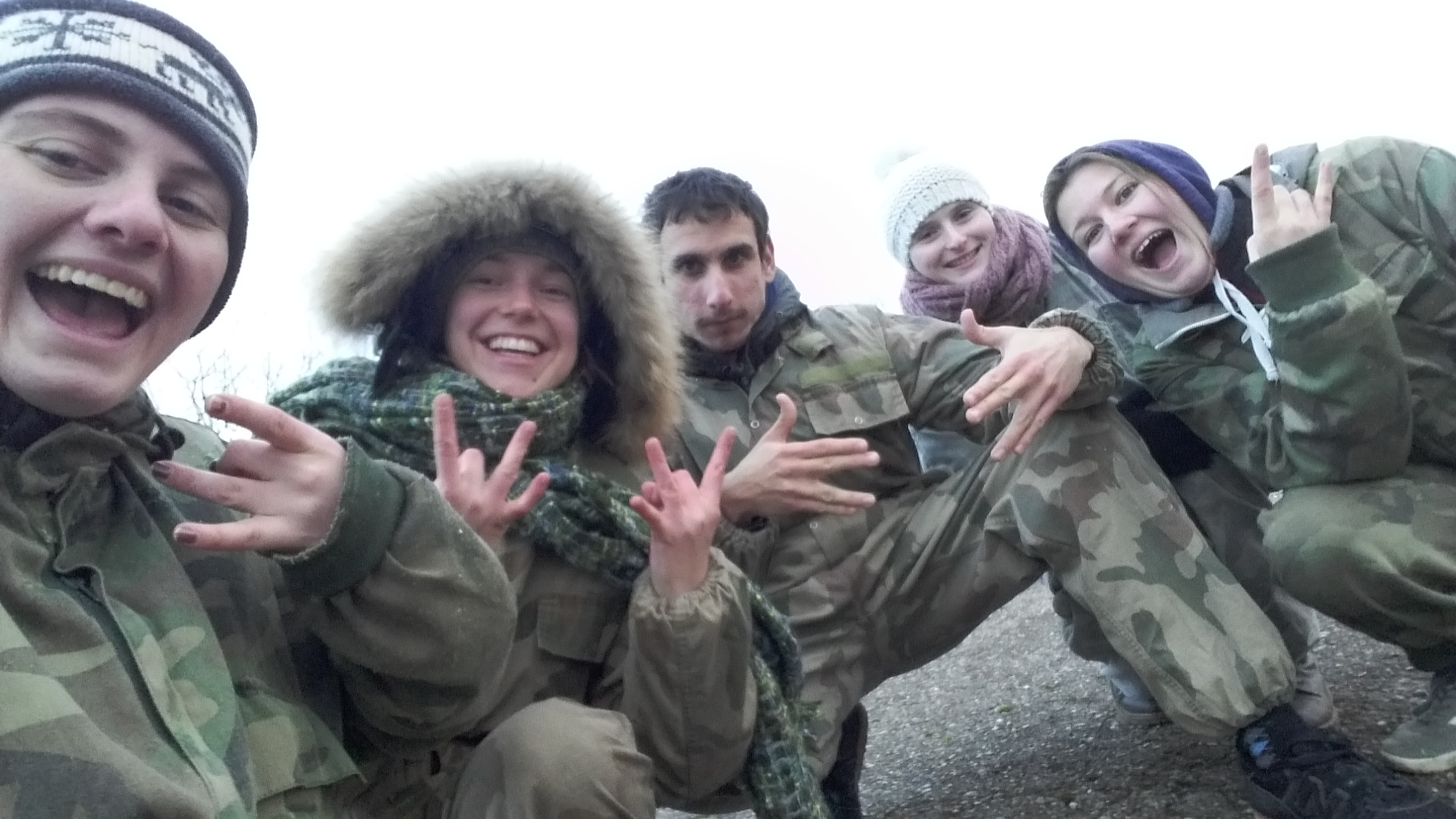 Once in Viljandi, we stayed in a volunteers flat -Thanks Julia and Lara :) -. That night, we went to a burger restaurant to eat a kebab. It was the biggest kebab i´ve ever seen in my life, but it didn´t tasted like a real kebab, so i was a bit disappointed, but i had dinner for two days.

That night we also went to a bar till late. The next morning, we were suposed to wake up early to explore the city, but nobody set the alarm, so we woke up pretty late. However, we had time enaugh to go breakfast and explore the castle and surroundings. We were very lucky because everything was covered by ice, so there was a magic landscape. I think the castle can´t be more beautiful that in that situation. After lunch, we came back to the bus station. 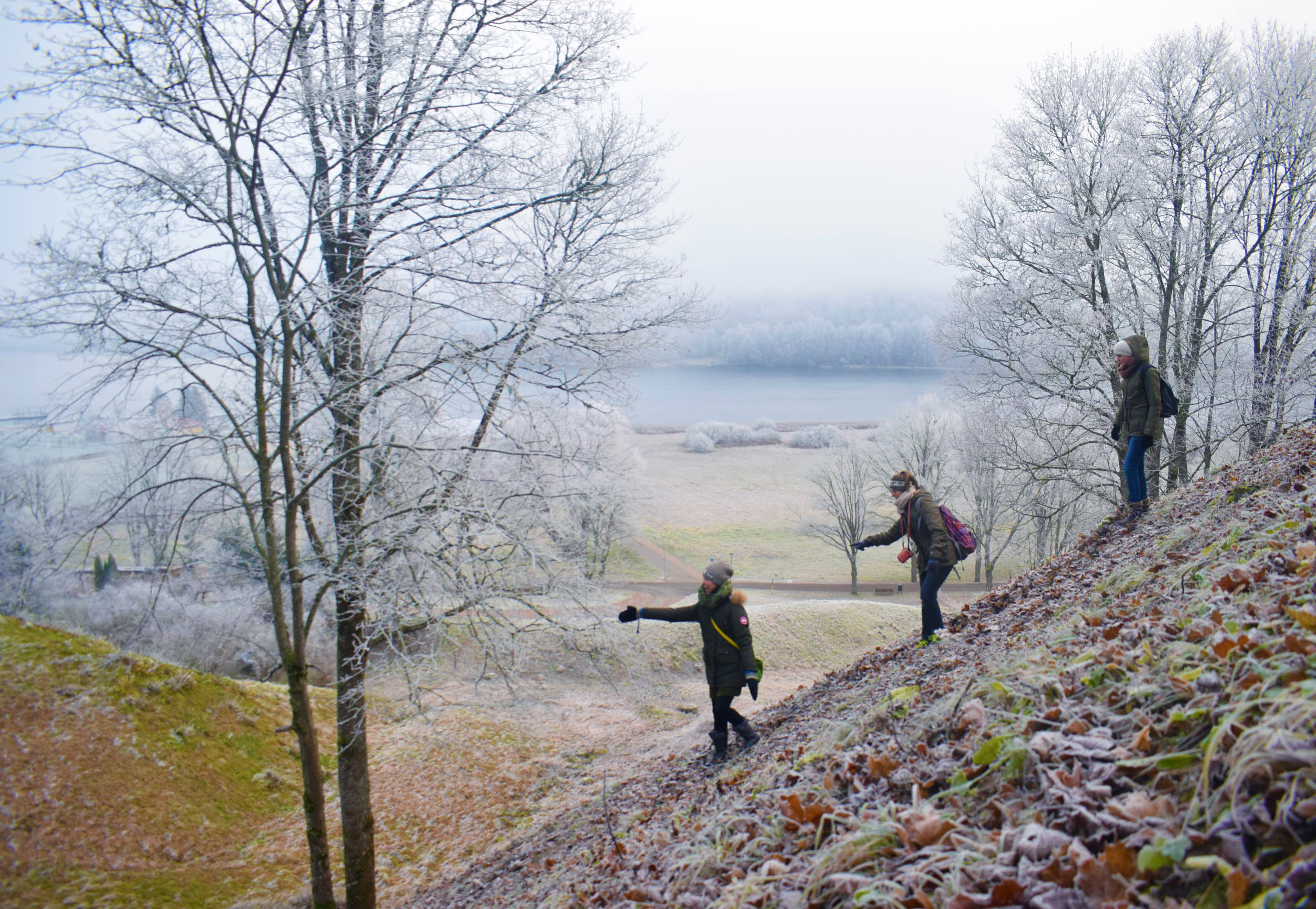 Katharina, Melina and Anna trying to go down hill

What else to say? About to live in Tõrva, i really like the town, and now with everything covered with snow it´s even more beautiful. I´m really looking forward to skiing or something. I also would like to built an igloo. This month i´ve experienced, for the first time in my life, how is to be in a -10º environment. I´m a bit afraid of the real winter because i´m already wearing two coats at the same time, and i think probably i´ll need to put a third one. But, at the moment, i´m fine with it.

I´m really starting to understand something when people talk to me in estonian, and sometimes i can even respond with a few words. Something new related to my work here, i´m going to Riidaja every week to do the fotoring with Egon. 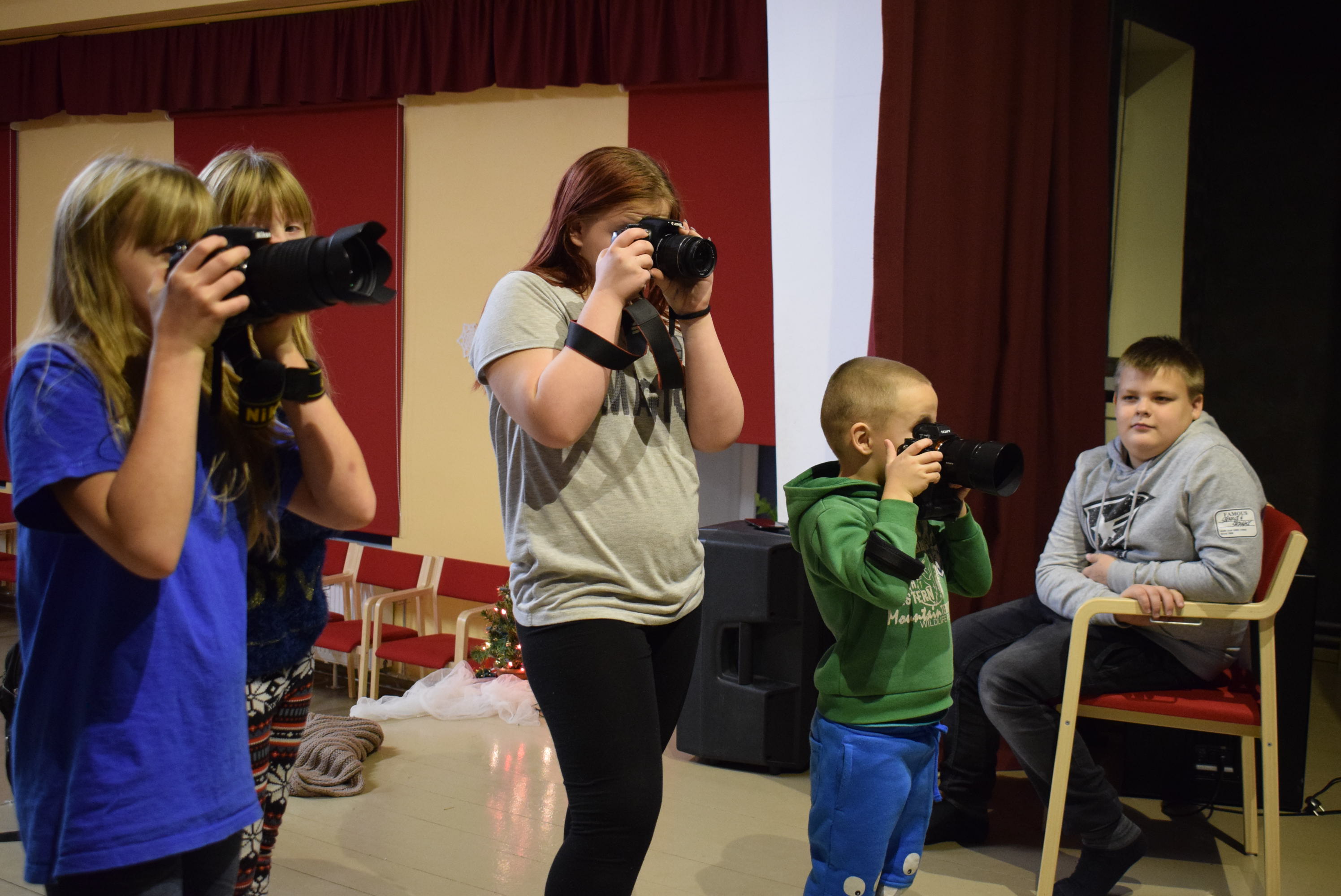 If you want to see more of my photos and adventures in Estonia, check out my instagram @gabrilost96