EVS blog: November in Hargla - the month that seemed to last only for a week 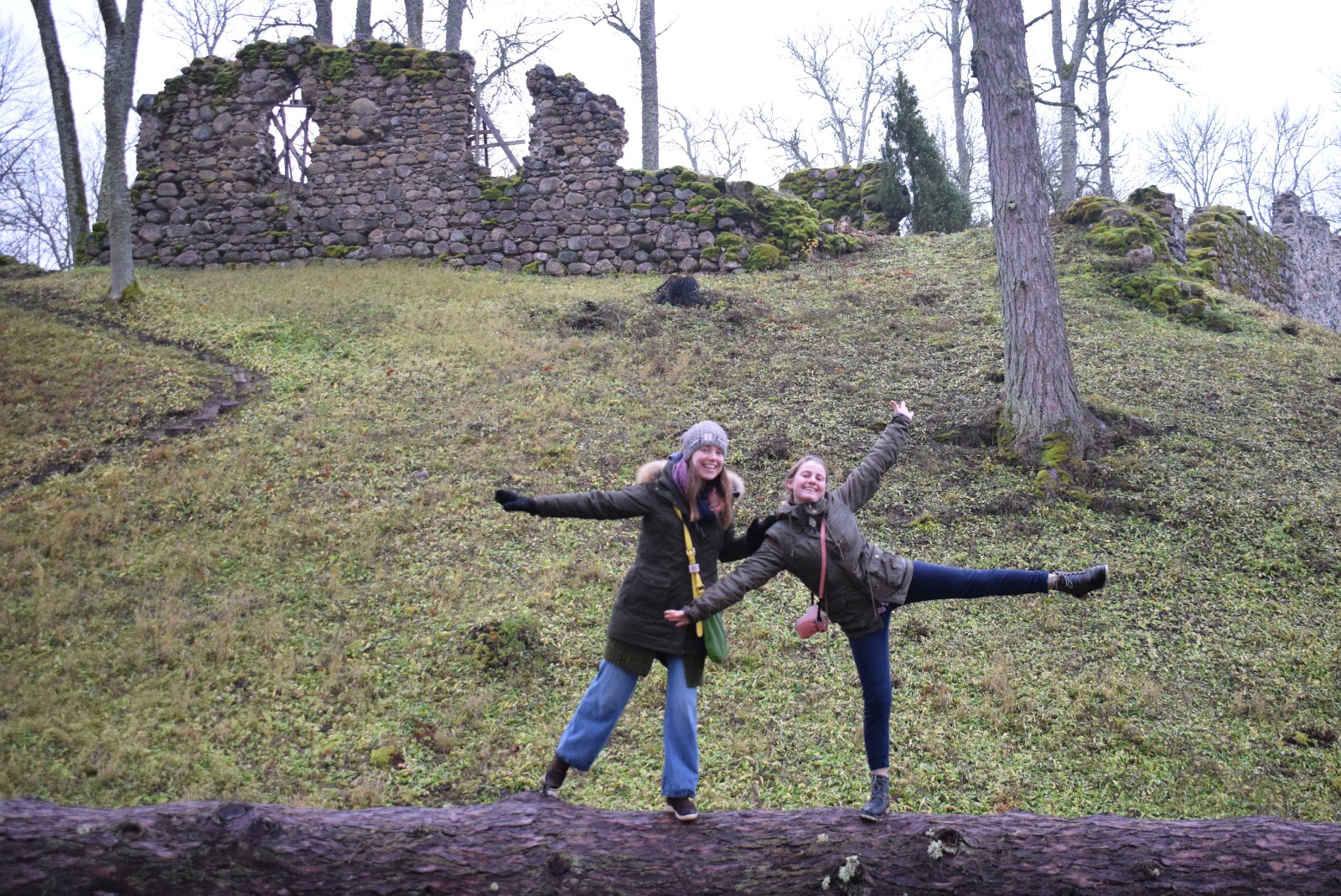 How is it possible that November is over already?! It feels like it just started a few days ago and suddenly Christmas is around the corner already…

The reason why November passed so fast is probably all the things I did, saw and experienced throughout the last 30 days. Those were…

… N as in New clubs
... O as in Oh, the first snow!
… V as in Viljandi
… E as in Estonian concert
… M as in Mardipäev traditions
… B as in Baking piparkook for the Braingame
… E as in Evening in Tartu and the Estonian language maybe isn’t even so hard
… R as in Riga 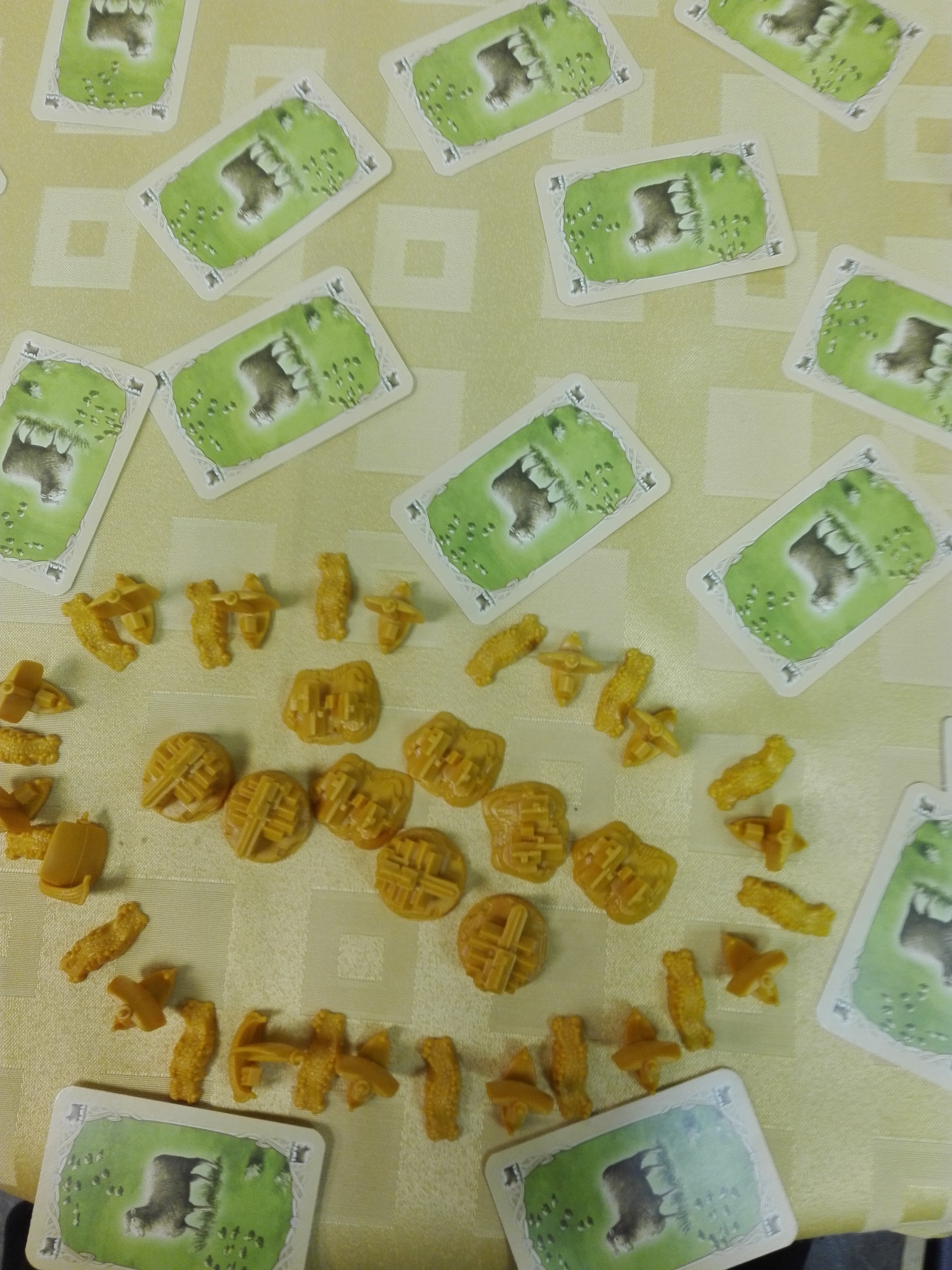 I participated in some new clubs during this month. For example I joined the cooking club twice, both times after I worked in the kindergarten in the morning. We cooked some really nice things, for example Seljanka and a super tasty (kind of) apple-cake soaked in milk.

Also, I started in the dance club with some other local ladies. That’s something I wasn’t expecting at all before I came here because me and dancing usually don’t work together well. But it’s surprisingly fun and not too difficult, so I should manage the little show we will have in December.

And another new “club” that started in November was the board game night on Mondays. Actually we’ve already been playing board games on Monday evening for a longer time instead of table tennis, but now it’s also like an “official” club. Thanks to that club I learned to play some cool new games and I almost feel like a Catan-pro now.

This is something I have been awaiting for a long time already. And when it finally really did snow for the first time I was super, super excited! Unfortunately, it wasn’t much snow and didn’t last long most of the times, but it was still very pretty and I’m glad I already got to see white Estonia. Hopefully there will be even more snow in the next weeks and months! But nevertheless, it’s clear that winter is here already now – the temperatures prove it. Some days there were even less than -10°C and your fingers froze off when you went outside without gloves for just 5 minutes. I will probably never get used to such coldness and I’m definitely going to bring my handwarmers with me when I come back to Estonia after spending Christmas in Austria (which I’m already really, really looking forward to because I can see all my family and friends again, as well as to my sisters visiting me the week before Christmas). 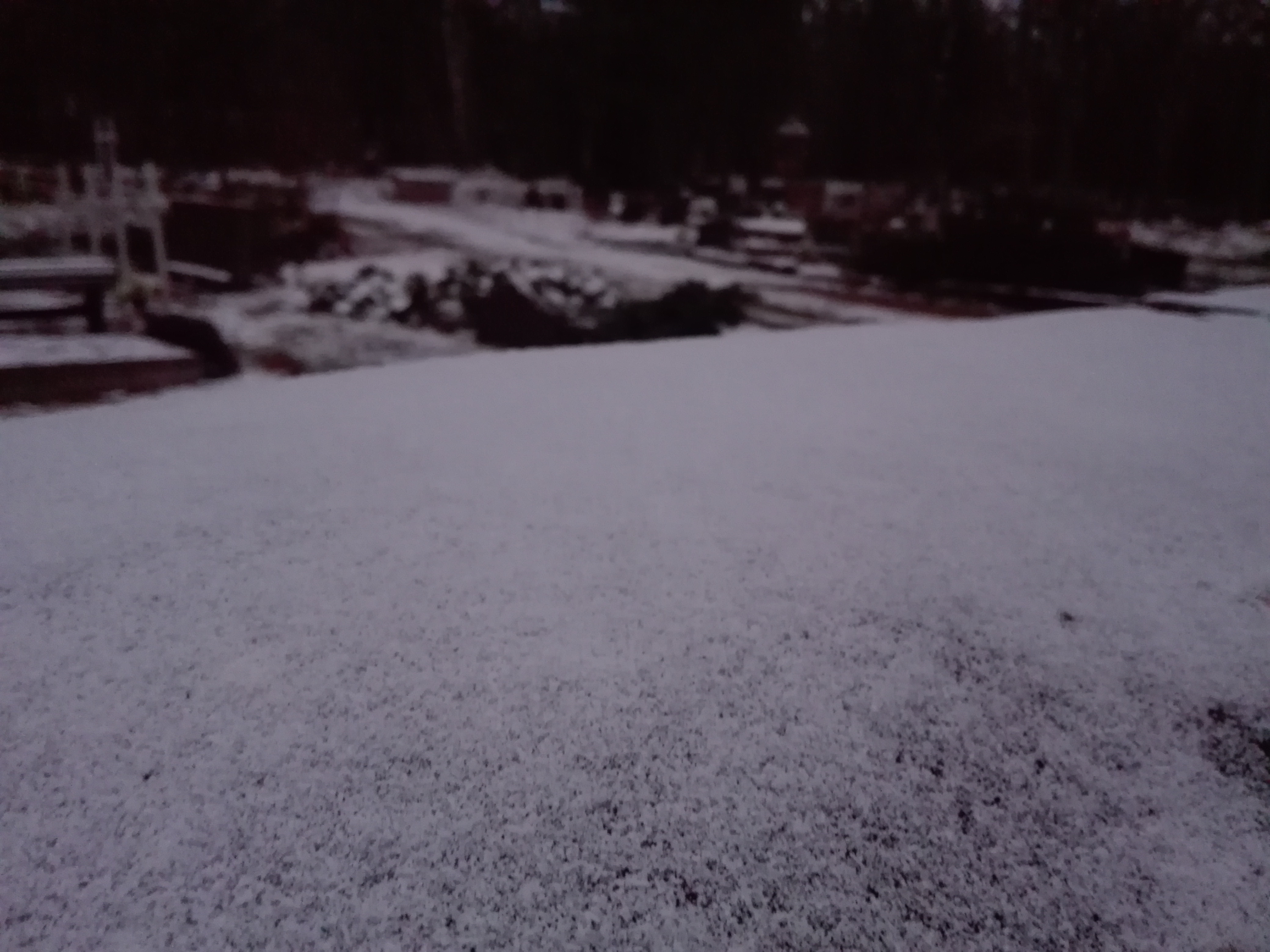 … V as in Viljandi 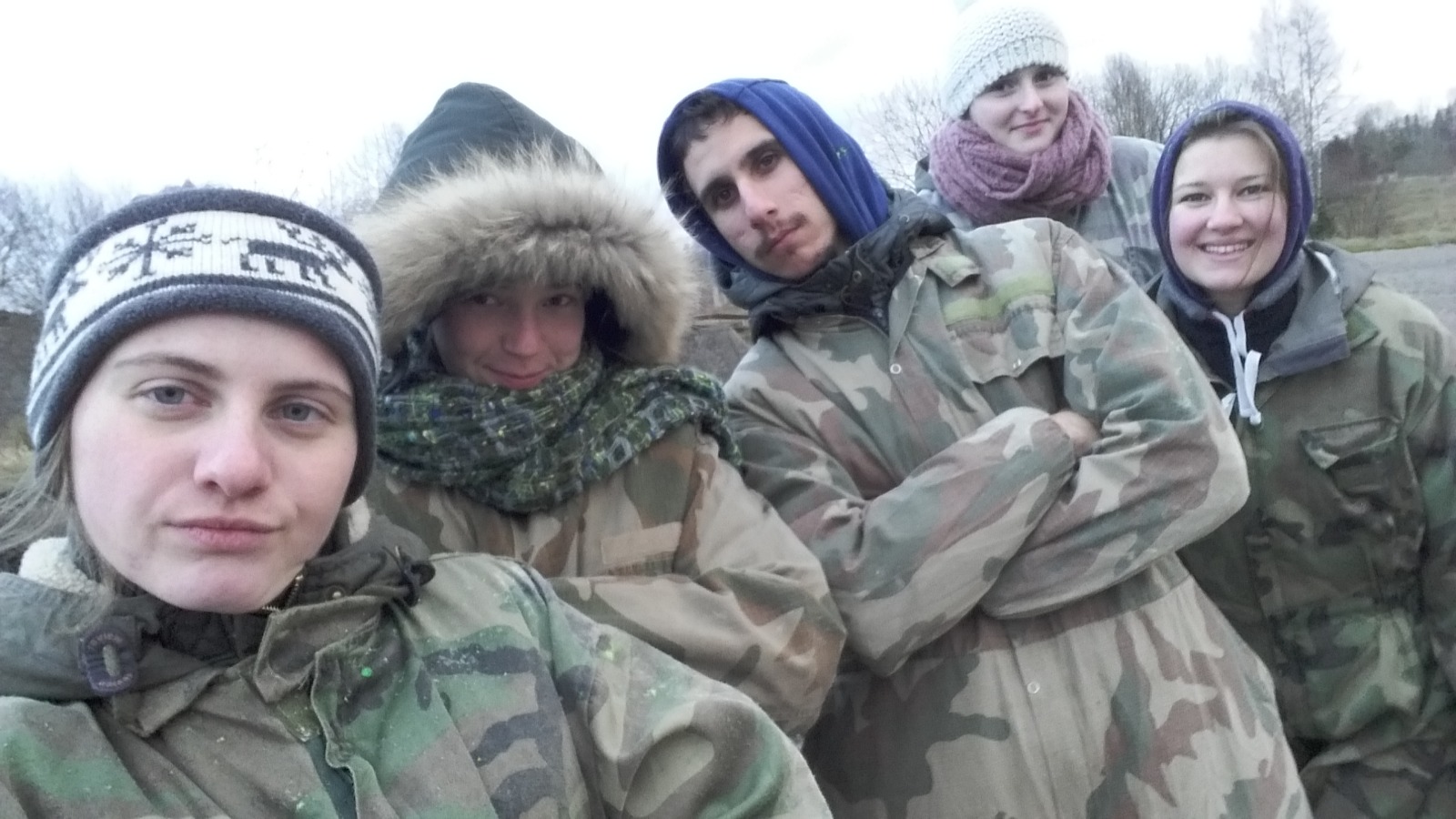 One weekend there was the possibility to play paintball with some other youngsters in a village close to Viljandi. Of course, I couldn’t miss out on that chance and together with the other volunteers I took part. However, nobody of us had ever played paintball before, so we had no idea what to expect and how to prepare. And being our naïve, southern selves, we were sure it was going to be somewhere inside since it was the middle of November already and freezing outside. But we forgot that Estonians are used to -20°C and apparently have a completely different feeling of cold. So, we just got military onesies (in XXL), thin gloves, the face mask (that always fogged up, so you were basically blind) and of course the paintball gun and were ready to run around and shoot each other in a dark, open building (and yes, getting hit is indeed painful). But the free food made up for it and at least now we have some funny pictures of us in way too big camouflage suits. 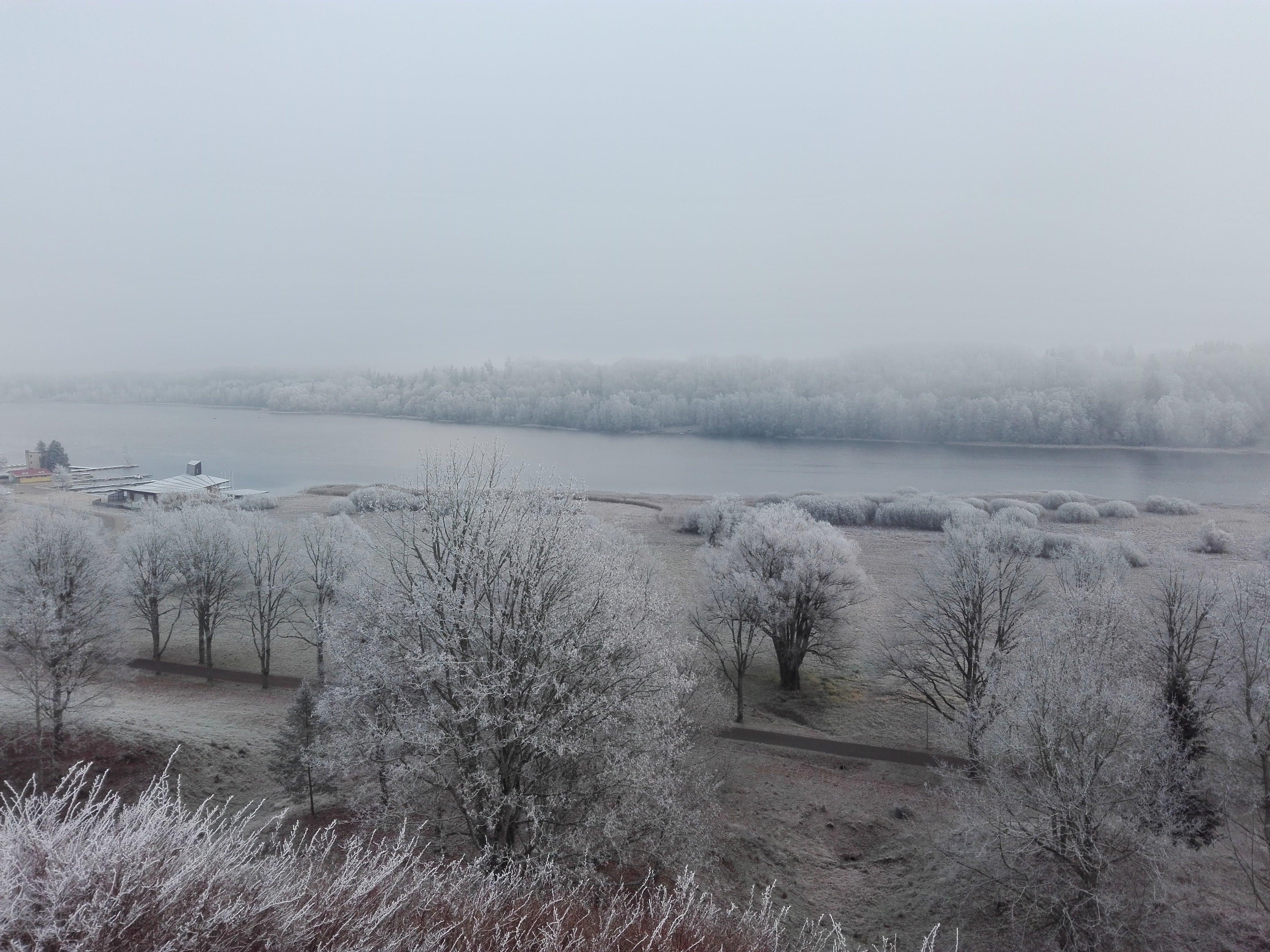 And since we were so close to Viljandi already, we decided to also visit the town afterwards. As we arrived in the evening, it was already dark, so we didn’t really see much but we could stay the night at a volunteer flat and explore Viljandi by day in the next morning. We were really lucky, because the sun was shining and everything was covered with white frost and we had the most beautiful winter view ever over the lake and forest there. But it was also extremely freezing, especially when the sun had disappeared…

… E as in Estonian concert 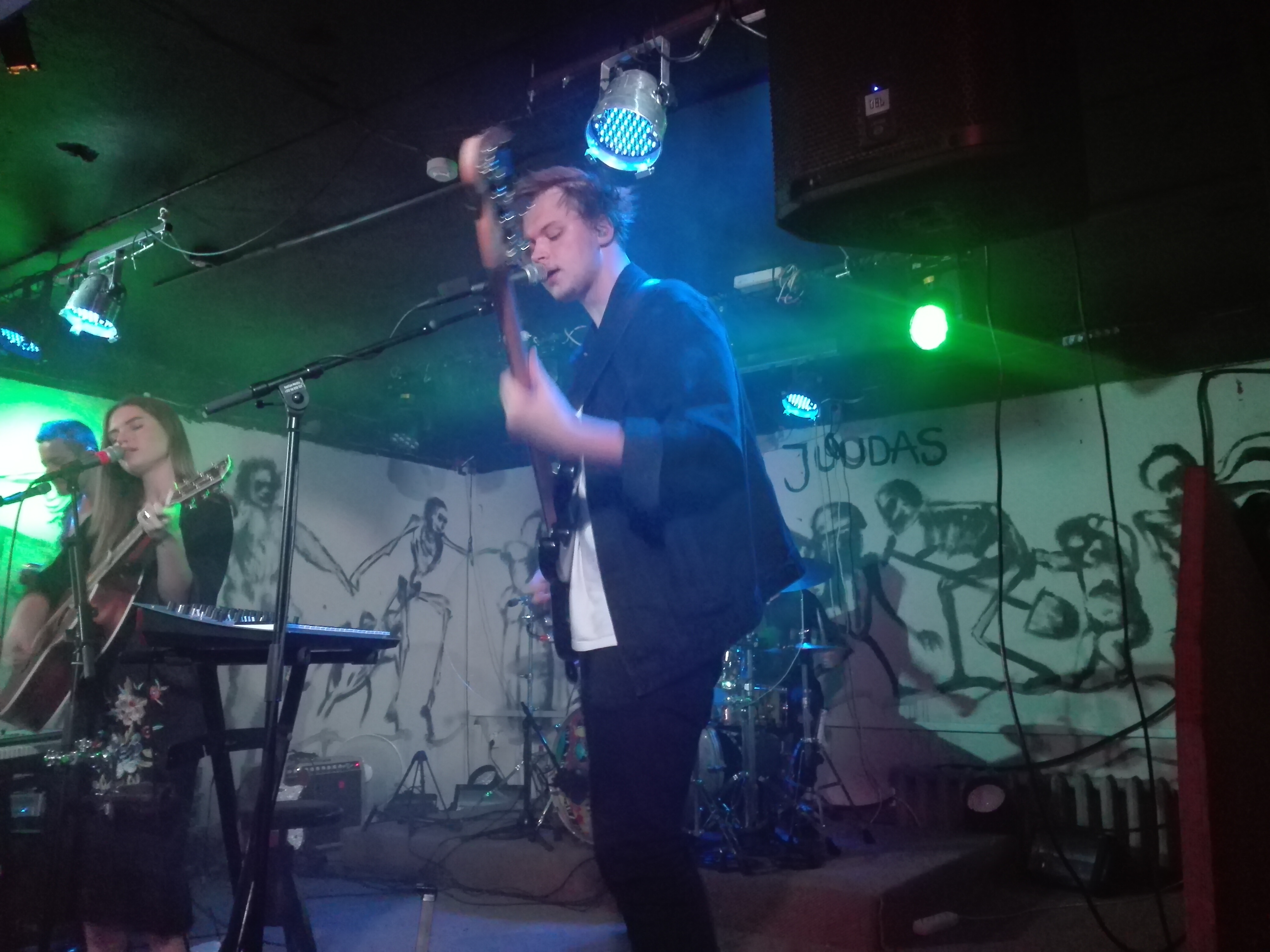 Another weekend I visited Tõrva and could cross off a thing from my 100-things-to-do-in-Estonia-list (which I also had to finish this month – it was almost impossible, but somehow I managed to do it!): going to a concert by an Estonian band. Gabriel, Artemis – his flatmate – and me had a nice night, at first visiting two of their friends and then at the concert in Pubi Juudas. The band was called Frankie Animal and I’m a big fan of their music ever since – Estonia has some really nice music! After the concert we played a lot of table football and talked to some locals until late in the night. The rest of the weekend we explored Tõrva with another volunteer, Katharina: the castle ruins, the lake by night and the Linnamägi (which was almost more of a hike than Suur Munamägi).

… M as in Mardipäev traditions

On the same evening as the concert I also got the chance to experience a typical Estonian tradition – the Mardipäev celebration. Although we have this day also in Austria (Martinstag), the Estonian way of celebrating is totally different. Instead of doing processions with lanterns, people in Estonia dress up in old clothes and wear frightening masks. They go from house to house, sing or act something, ask riddles and throw beans (which is supposed to bring good luck and health or something). As a reward they will get some candy or little treats. I had the luck to experience one of those Mardipäev groups in action and it was very nice to watch (although the throwing-beans-part surprised me a bit).

… B as in Baking gingerbread for the Braingame 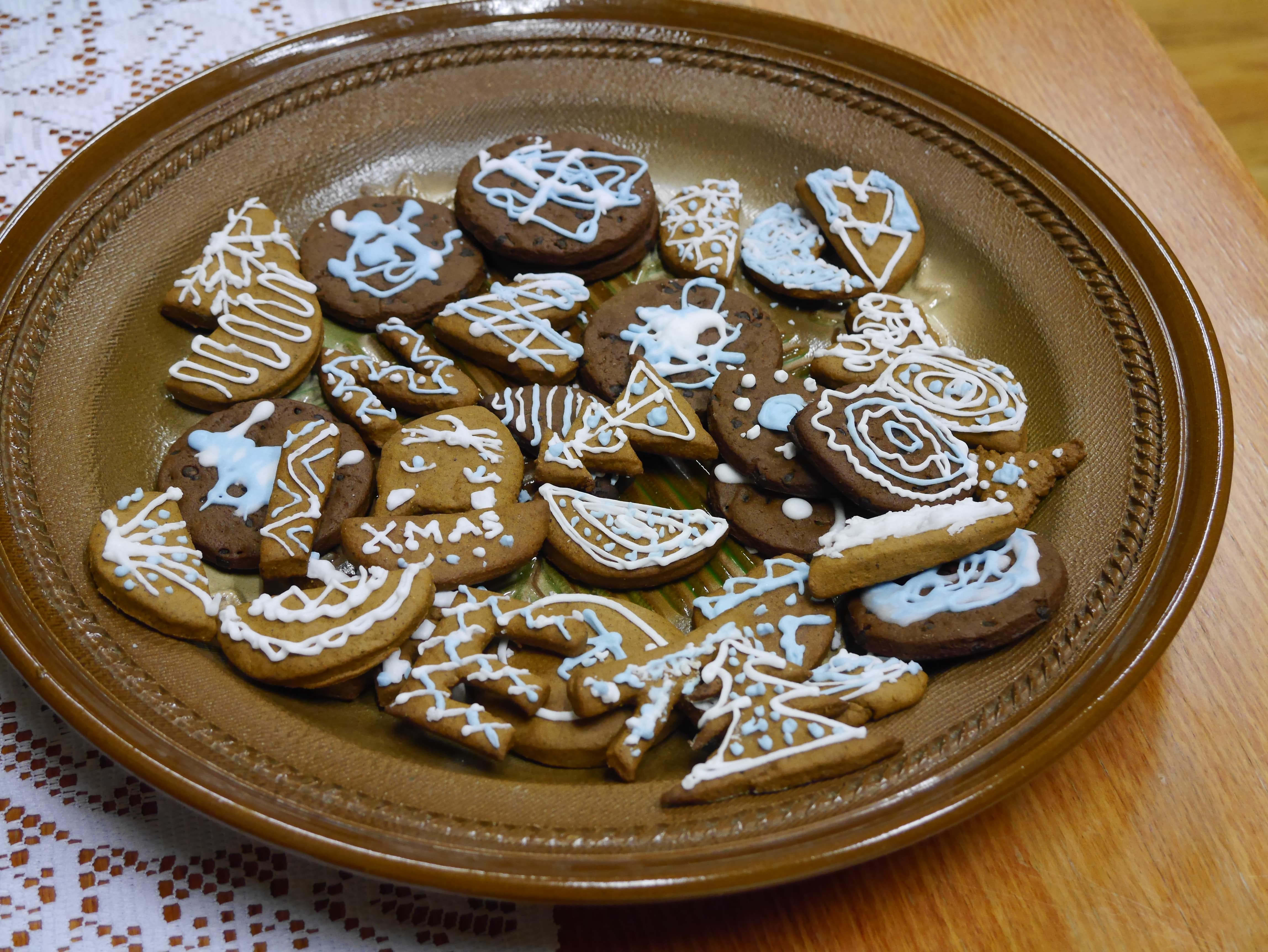 In the end of November the second stage of the brain game took place. It was the Christmas edition and was under the motto “piparkook” (gingerbread). So it was just natural that we would also bake some ourselves. Together with Rainer (one of the youngsters from my youth center) I spent like hours rolling the pastry, cutting out different shapes (I did some gingerbread men – another thing I can cross off my list now!), baking and decorating the cookies (this was the most exhausting part – our fingers really hurt afterwards from squeezing the icing bag so hard). But it was worth it and even though we left some of the gingerbread too long in the oven, the braingame participants seemed to like them, as soon none were left anymore.

The first weekend in November, right after my family left, I went to Tartu with Gabriel, Katharina and Anna. We had a long night there, saw a lot of statues, got to know some new people who we spent most of the night with and could even watch the city from a rooftop. I didn’t get much sleep, so I was really happy when I came back to Hargla and could finally have a nice nap in my bed. 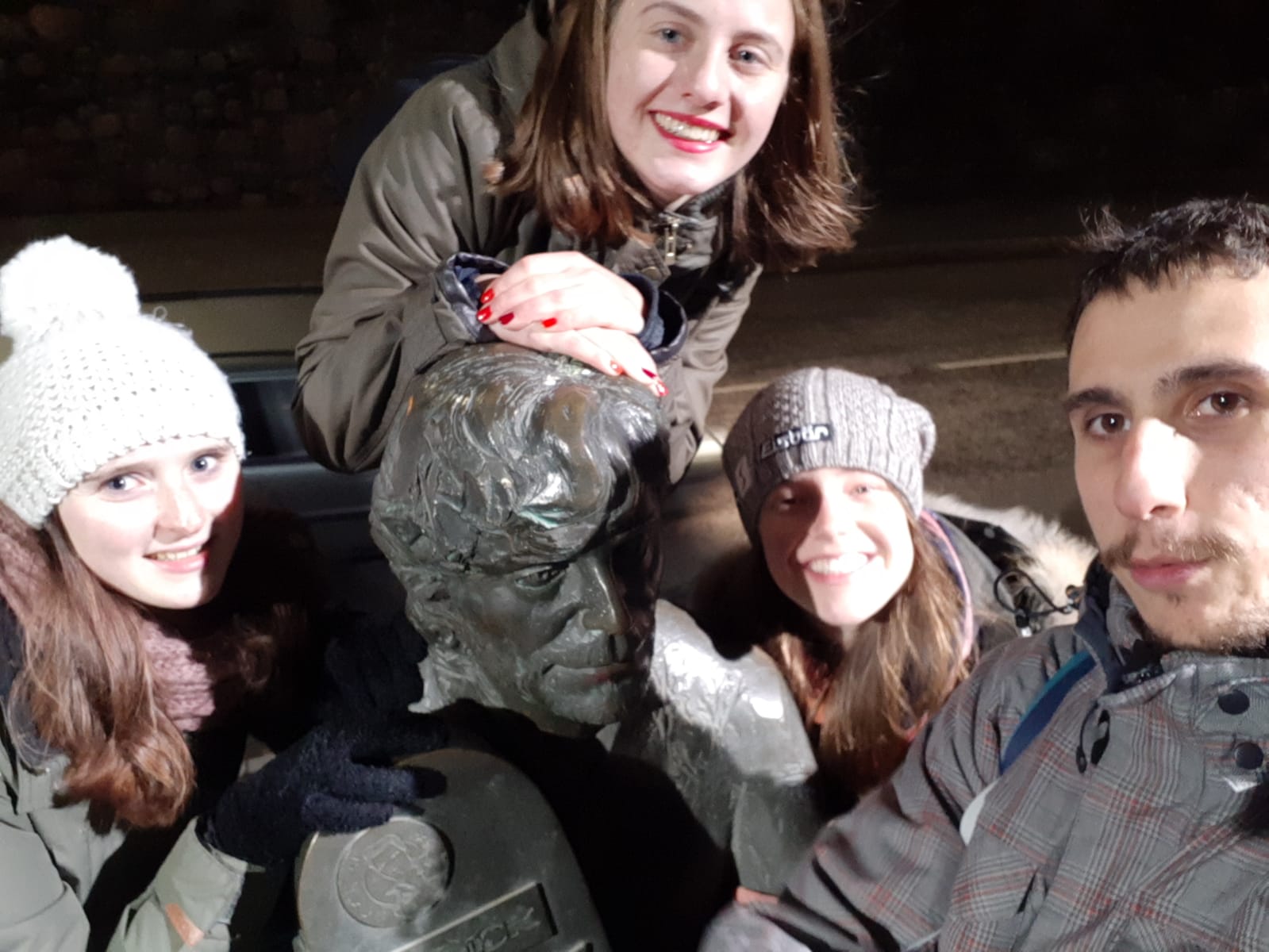 And throughout the last weeks I realised that I’m actually starting to understand quite some things in Estonian. I mean, sometimes it still happens that I’m listening to someone and have no idea what they just said. But mostly, I can at least catch some parts and kind of get the topic they are talking about. Also, I’m slowly losing my fear of actually trying to speak Estonian myself. Although I still need quite long to form a proper sentence and I make loads of mistakes, I feel like I’m getting better!

I have wanted to go to Riga for a long time already, and one weekend in November it finally worked out. And even though in the beginning it all looked a bit grey, the more I saw of the city, the more I started to like it. And since we went there on the weekend of their 100-year-independence anniversary, we got to see some extra cool events and light installations. But there were so many of them, and they were located all over the city, so in the evening my legs hurt really bad already and we all were quite tired. But still, we wanted to experience Riga at night, so we decided to go out and danced (and even sang although we didn’t know the lyrics) to Latvian songs.

So far everything was fine, but when we went back to our hostel the interesting part of our Riga trip began: There were people sleeping in our beds!! And there wasn’t even anybody who could help us solve the problem or who we could complain at. So we decided to just get our stuff and go to McDonalds. Later we found out that they had made a booking mistake, but then it was already too late. I guess next time we’ll just choose another hostel :D 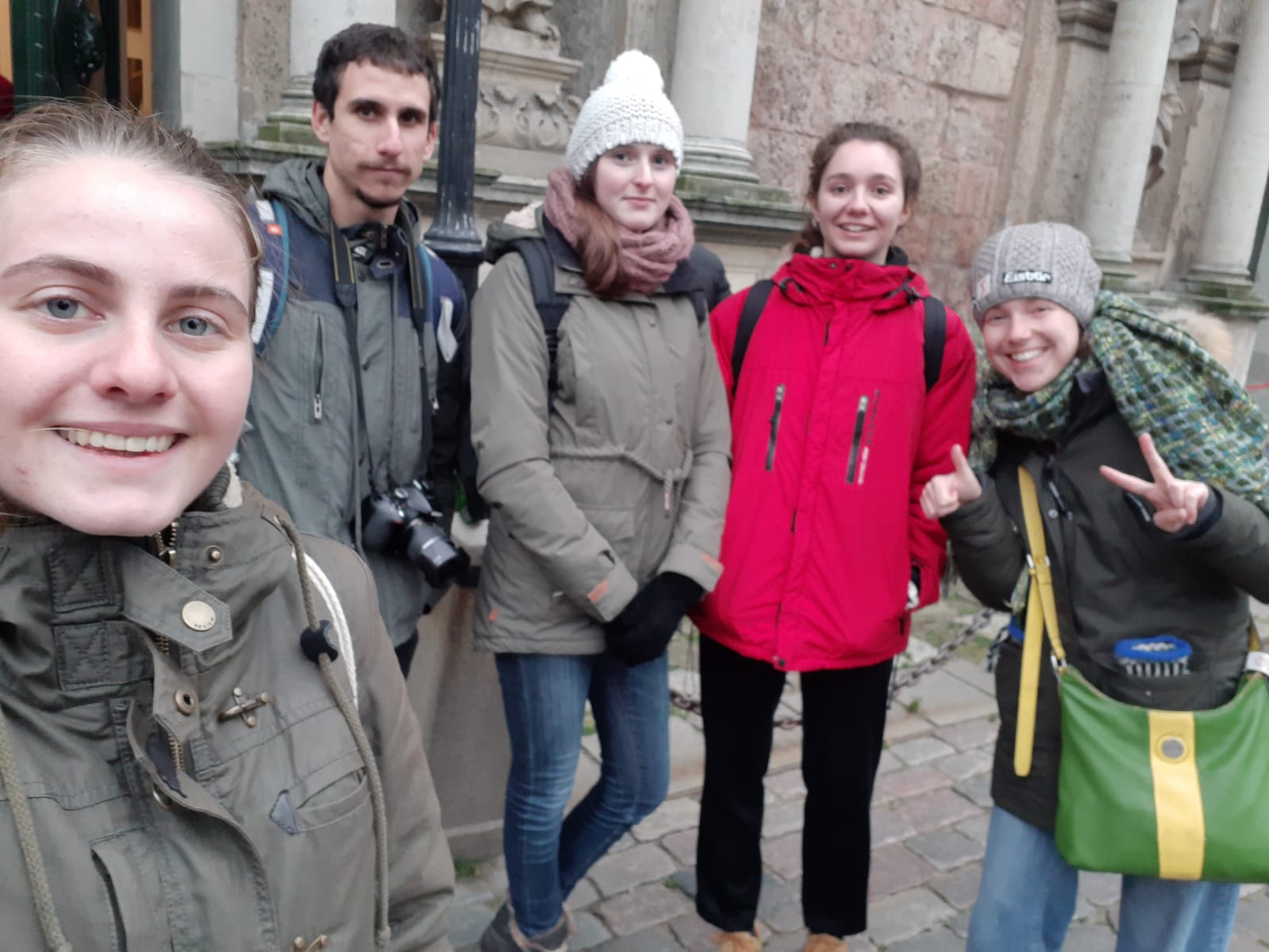 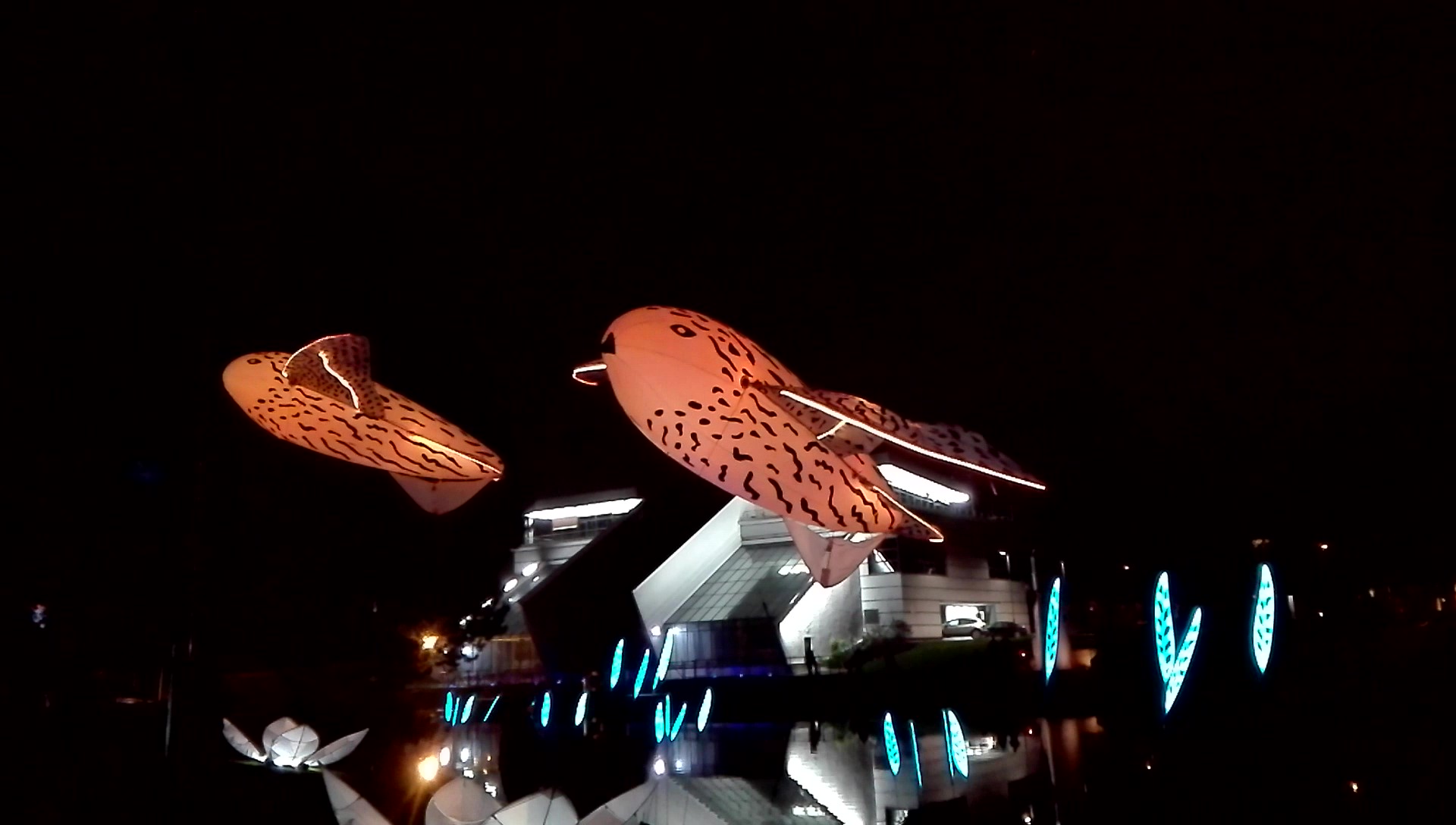