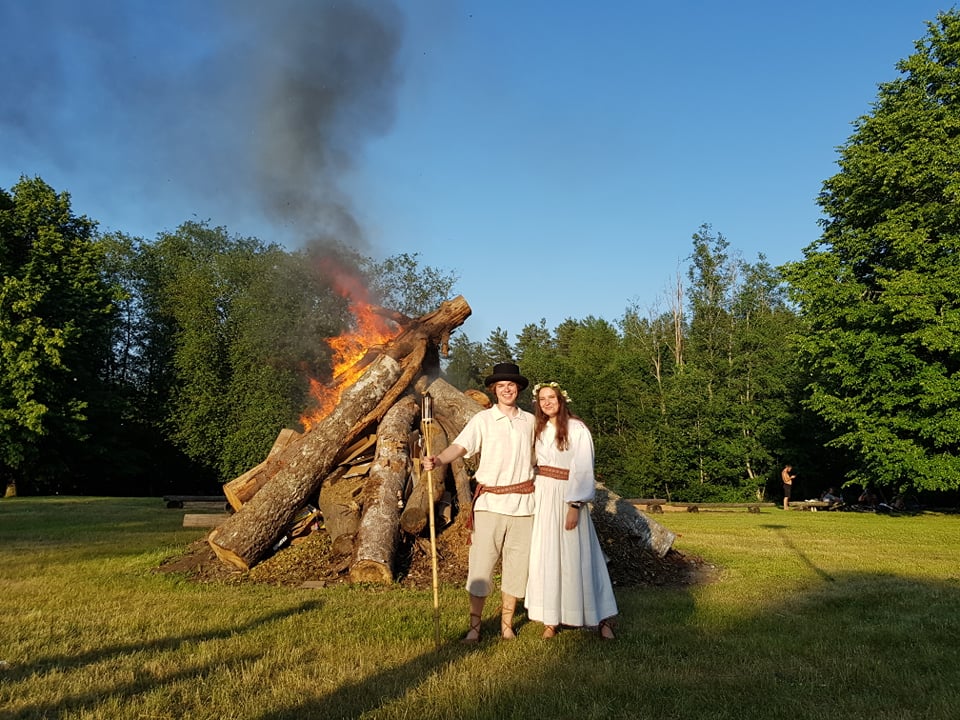 June started for me with a little hangover. Vici celebrated her birthday on the last day of May and so I woke up the next morning a bit dehydrated and with a little headache. Even if I didn’t have the best start into the month, June became an activity packed month with the longest days I ever encountered. The first week was still a little bit slow paced and I was quite happy to again enjoy a normal week in the youth center. Already nearly the last one. The only downside to these days was the abnormal heatwave that conquered Estonia, with the thermometer reaching 35 degrees in our flat. But with the astonishing weather, low pandemic numbers and the longest day of the year approaching, big events started to come up daily.

The first one was connected with the city birthday of Valga. The government organized a festival on the peninsula of the city river. While they sold basic street food the whole evening, the main event was two concerts in the evening. The first one was a Rigan band, playing classical pieces of music like Orff, Tchaikovsky or Bach on several bowed instruments, but with a twist. They also got a drum playing along and interpreted those songs as metal versions… typical Estonians.
The second band was obviously a normal metal band, apparently quite famous in the country. This concert was kinda the first one after the long countrywide lock down, so even though it felt great to feel the atmosphere of concert again, it also felt kinda off with the sheer amount of people standing around one.

In the middle of the month, there were two days right after each other, which I was looking forward to since April. First, I got my second dose of vaccination. Finally, I have the best protection against the virus. Unfortunately, my birthday was the day right after and to ensure the best immune reaction possible, I didn't drunk alcohol these days and wasn't able to celebrate properly. 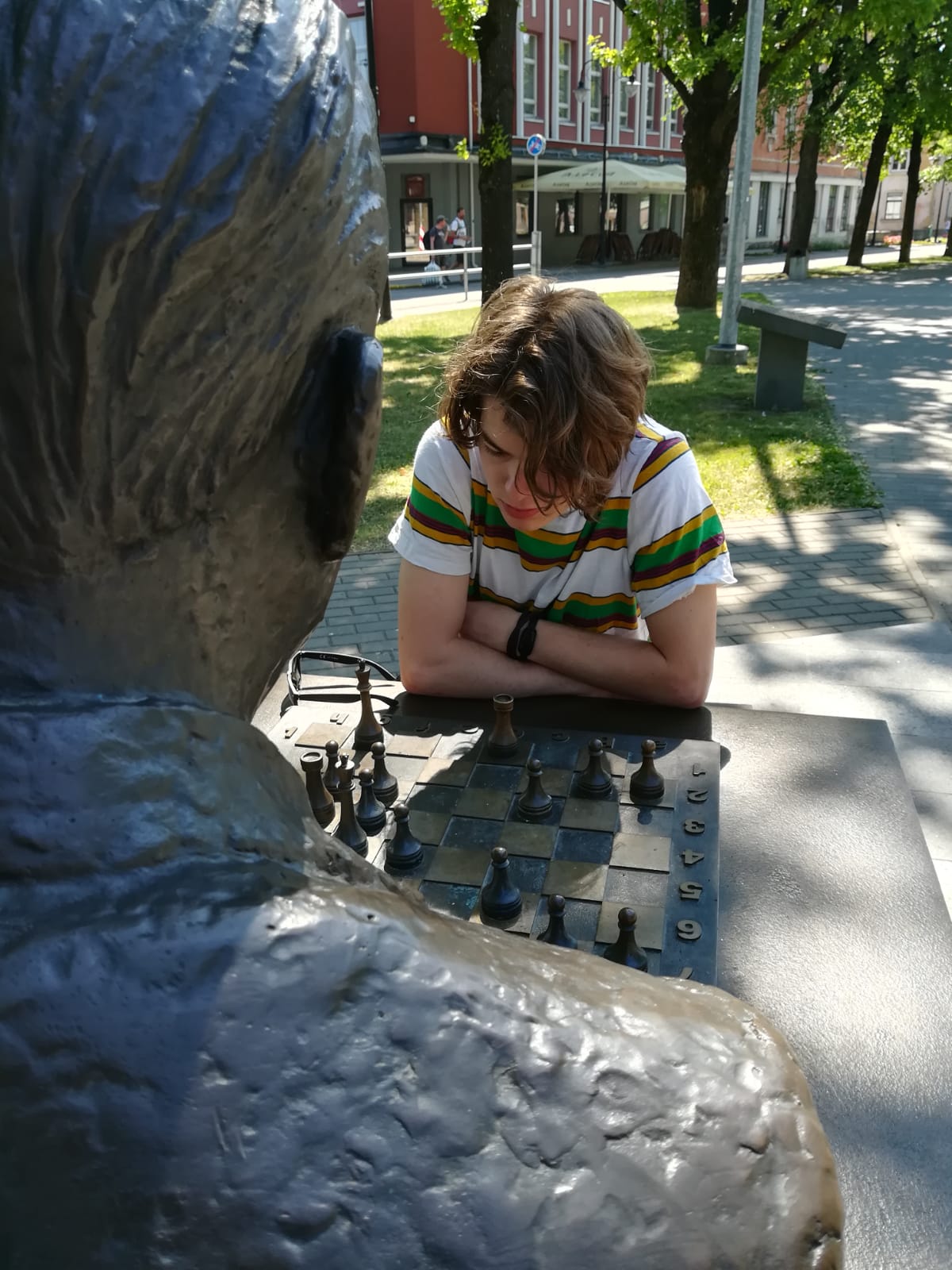 And as always, Vici and I obviously went to a vacation the next weekend. This was quite a long trip with the main goal being the city Narva on the border to Russia, but let's start from the beginning. While packing my stuff I already did a crucial mistake… I forgot my toothbrush. Nevertheless, we started with our three days trip through East Estonia. The first stop quickly approached. We took a rest on the shores of lake Peipus and also in a small town nearby. While the lake is famous for being the biggest in Estonia and the fifth biggest one in whole Europe, the town is known for their small population of “Old-Believers”. Those people had to flee soviet Russia after the reform of the church and a lot of them settled in Estonia. After spending a couple of hours on those two spots, we drove directly to Narwa, a city located like Valga right on the border to another country. Just in this case it is Russia. As well as Valga, it has a twin town right behind the border river, but it is impossible to visit it right on the spot. So, we had to be satisfied with seeing Russians waving at us. Maybe it was a call for help...
In the Russian influenced city we met with the local volunteers we already know prior from the On-Arrival training. Even though they were stressed out from a small festival they organized, they generously hosted us in their flat and even took us to a bar for a bit of chatting and a beer. 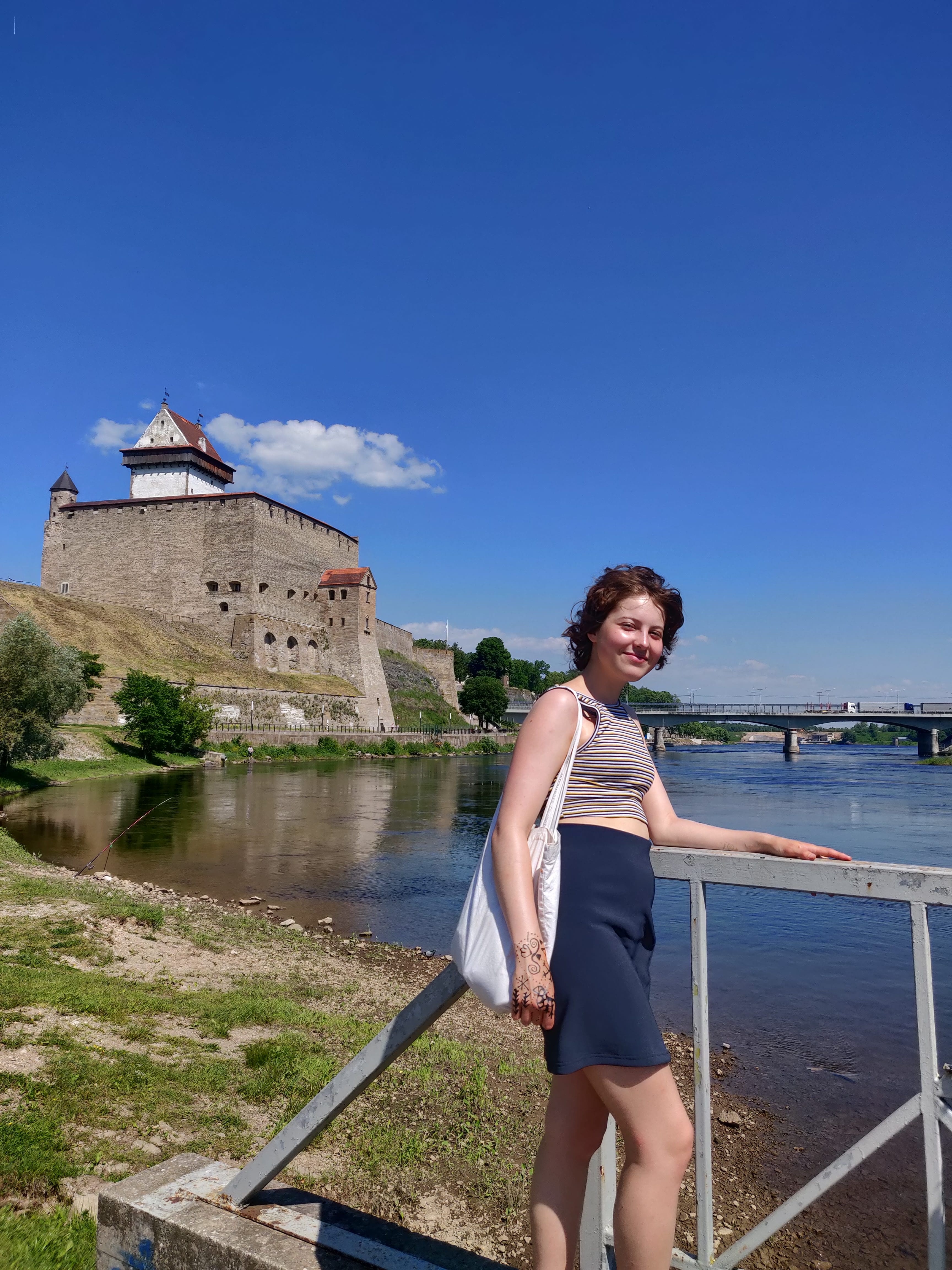 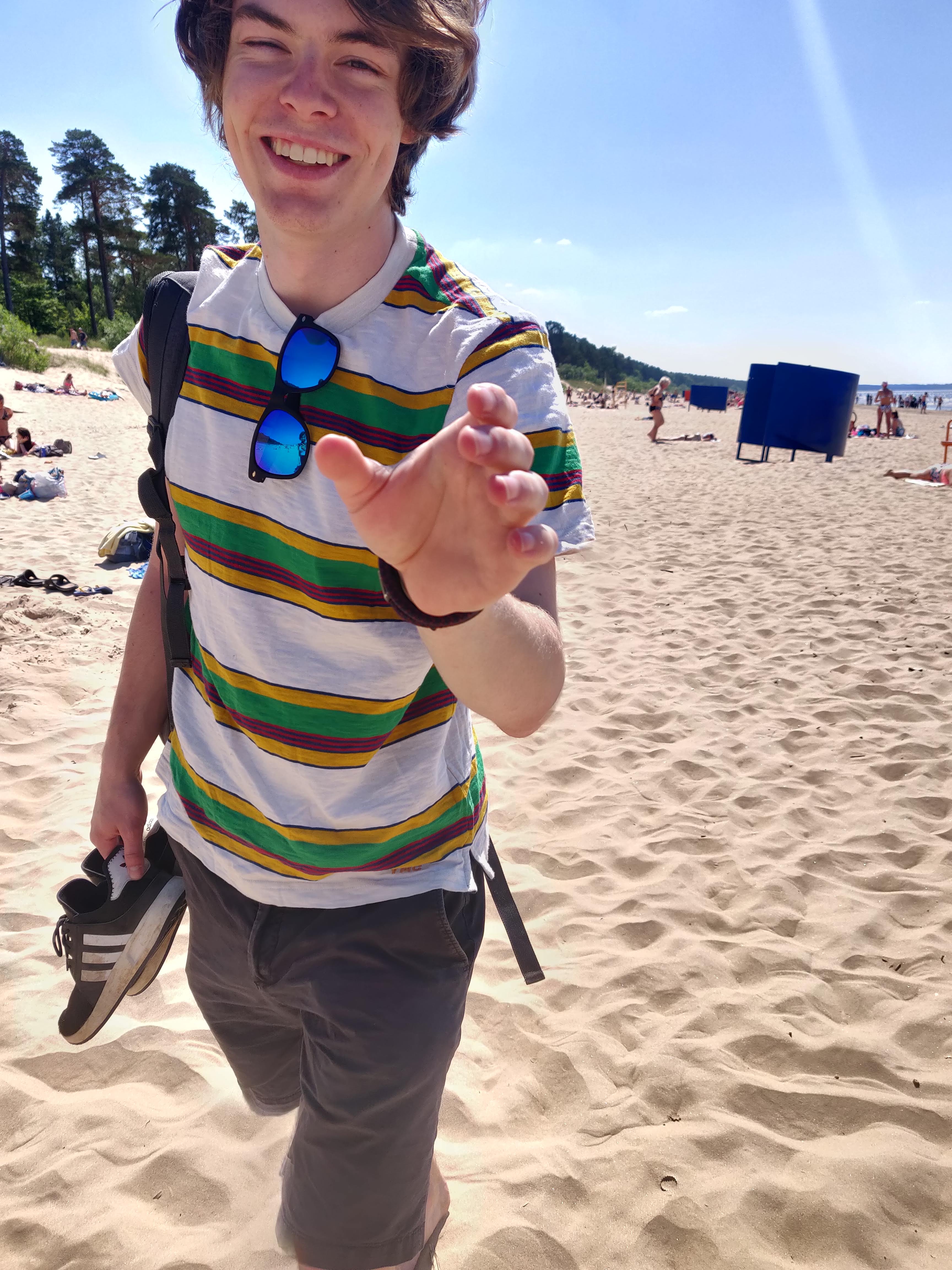 The day after we already had to leave Narwa and continued our trip through north-east Estonia and after a road trip with a lot of sightseeing we ended up in an even smaller village than Hargla, called Savala, located near Rakvere. Even this small conglomerate of Russian buildings, called for whatever reason village has a volunteer and because he is also from Germany Vici and I had no problem getting in touch with him while he showed as the artificial lake nearby and grilled with us in the evening. On the third day we finally headed back, but still stopped at a hiking trail around some lakes. There we did at one point a grave mistake and lost track of the trail. So we had to walked with the company of hundreds of mosquitos through the wilderness. Luckily a cool bath awaited us, when we finally made it to the end. 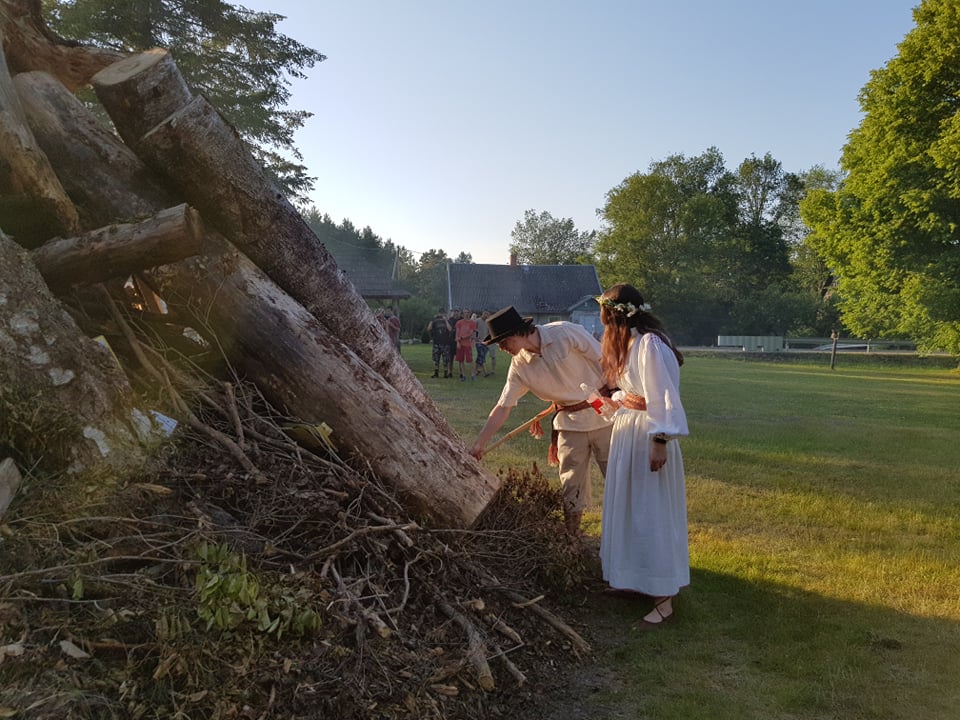 Then Jaanipӓev finally arrived. The day whole Estonia and north Europe is awaiting the entire year. The official date for this is always the longest day of the year, the 24th of June. But because this holiday is even more important than Christmas for Estonians and they want to celebrate as much as possible, the whole week around this day is just a big party in the country, with smaller and bigger festivals festivals going on in every town on different days. The first one for me was the official celebration in Hargla. My flatmate Dasha and me had the honor to dress up in the traditional clothes, play Jaan and his wife and light up the bonfire. Big bonfires are the most important part of the celebration, no matter where you are. But after seeing a fire every day for a whole week I can finally conclude: Bonfires are way more impressive when it is dark outside and not partly light. Also, the famous smoke sauna from the eco village of Hargla got heated up for one of these days. It was an interesting experience, but I still prefer the normal ones. They are just more practical to use, they don’t need to be heated up for more than six hours and you don’t have the risk of coming out black from the sedge on the walls.
Overall, my first Jaanipӓev experience was so much fun. Unfortunately, it will be hard for me to experience it soon again, because around the 24th there’s always university going on. 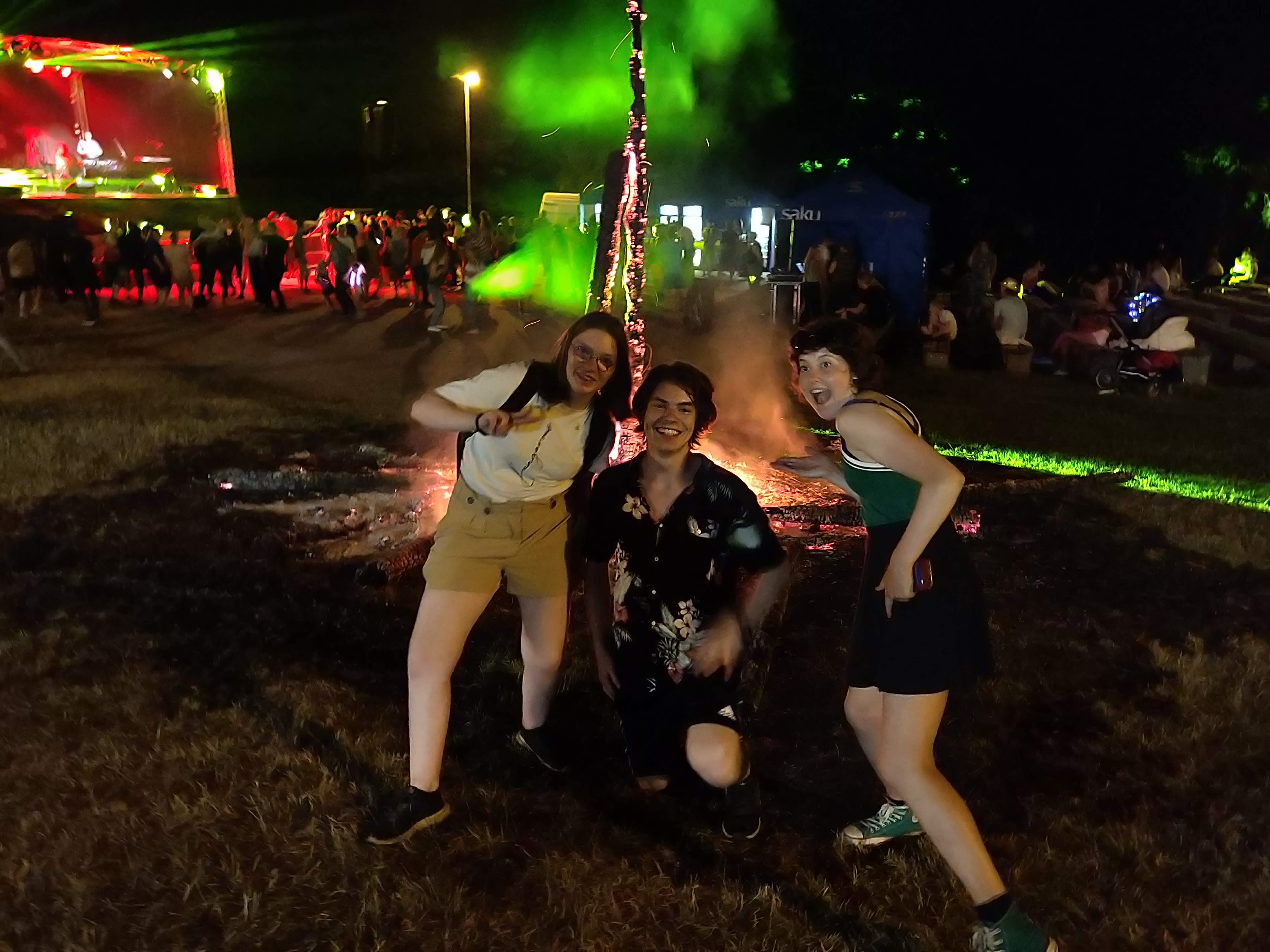 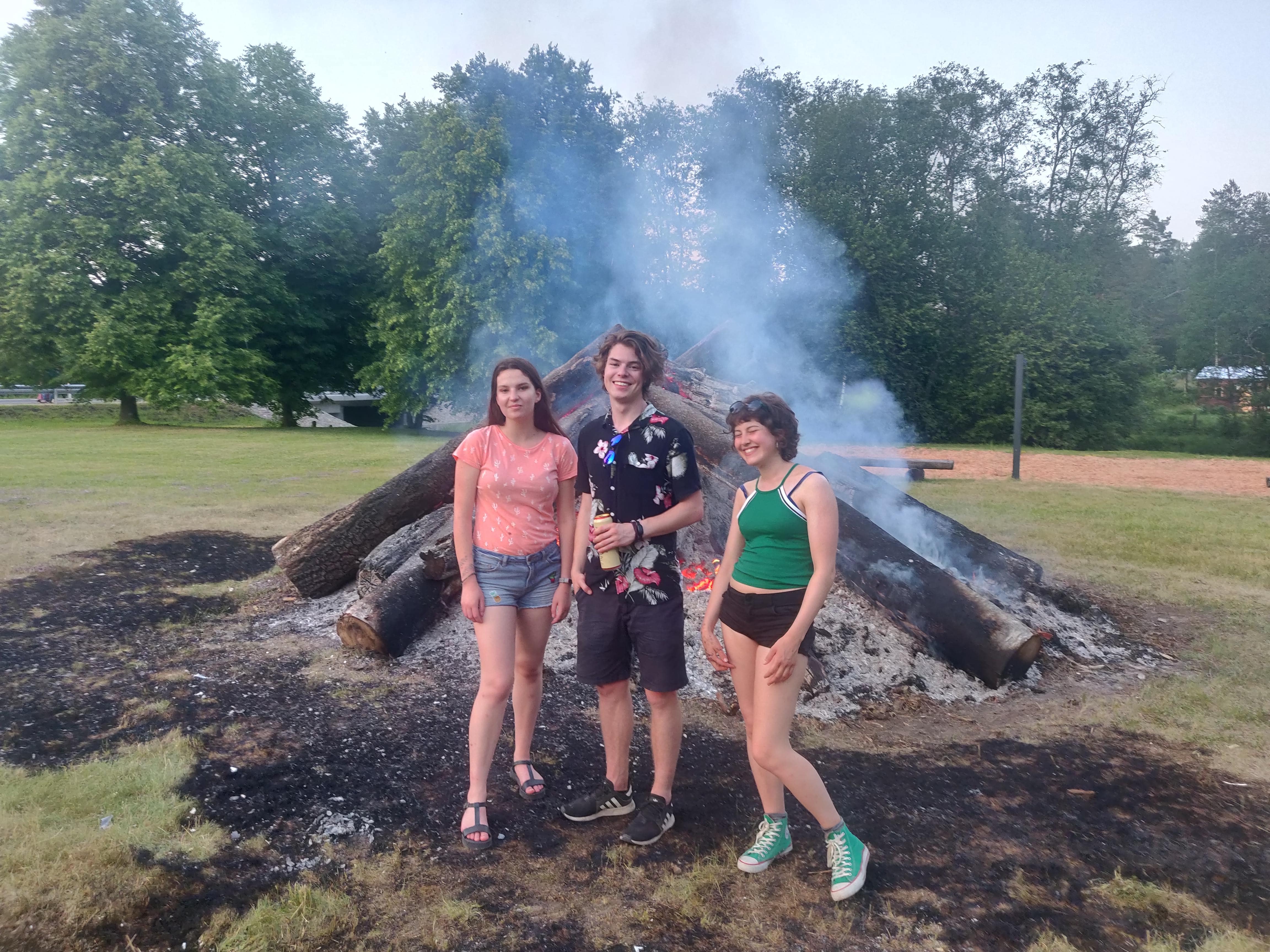 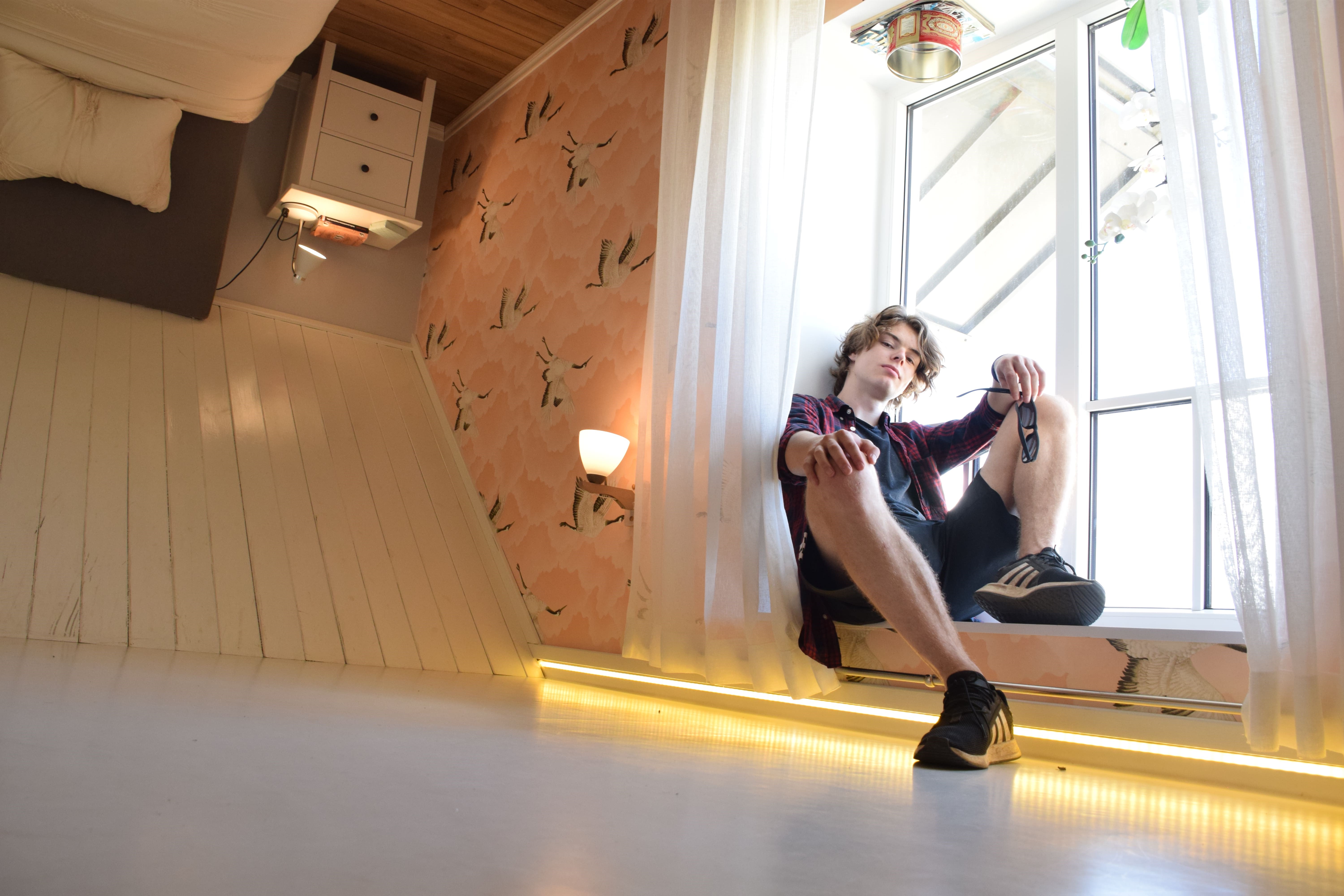 In the end of the week Vici, Mylene, Dasha and I once more drove off once more to a trip. Because we wanted to see the famous upside-down house next to the national museum, this time to Tartu. First of all, the floor inside is slightly tilted and therefore stressful to walk upon. Second it is damn hard to make good looking pictures in there; huge respect to everyone who accomplished this. I was also able to spend some minutes on the famous village swings of Estonia for the first time with people around my age. This was quite a good preparation for something that is coming up in July. 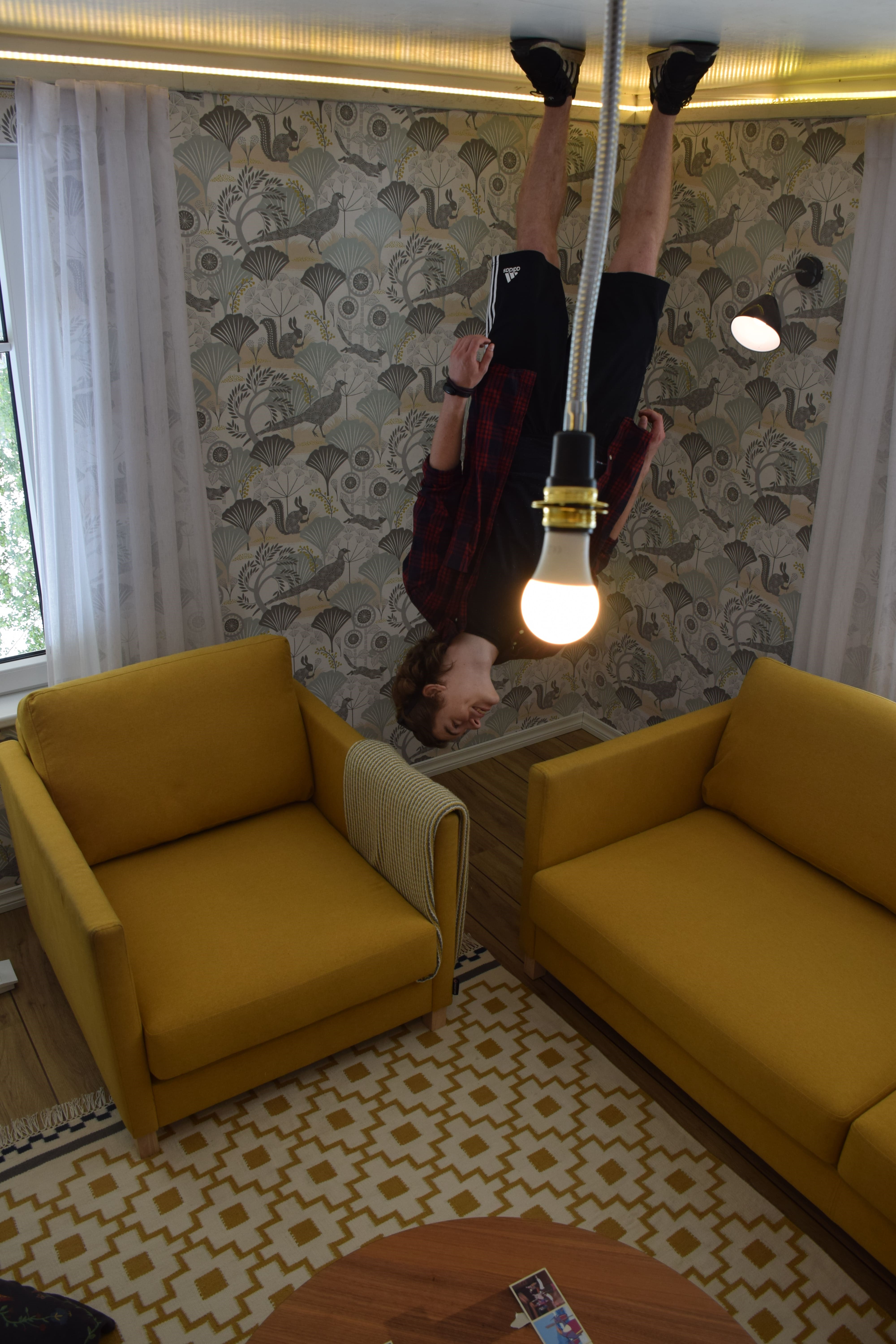 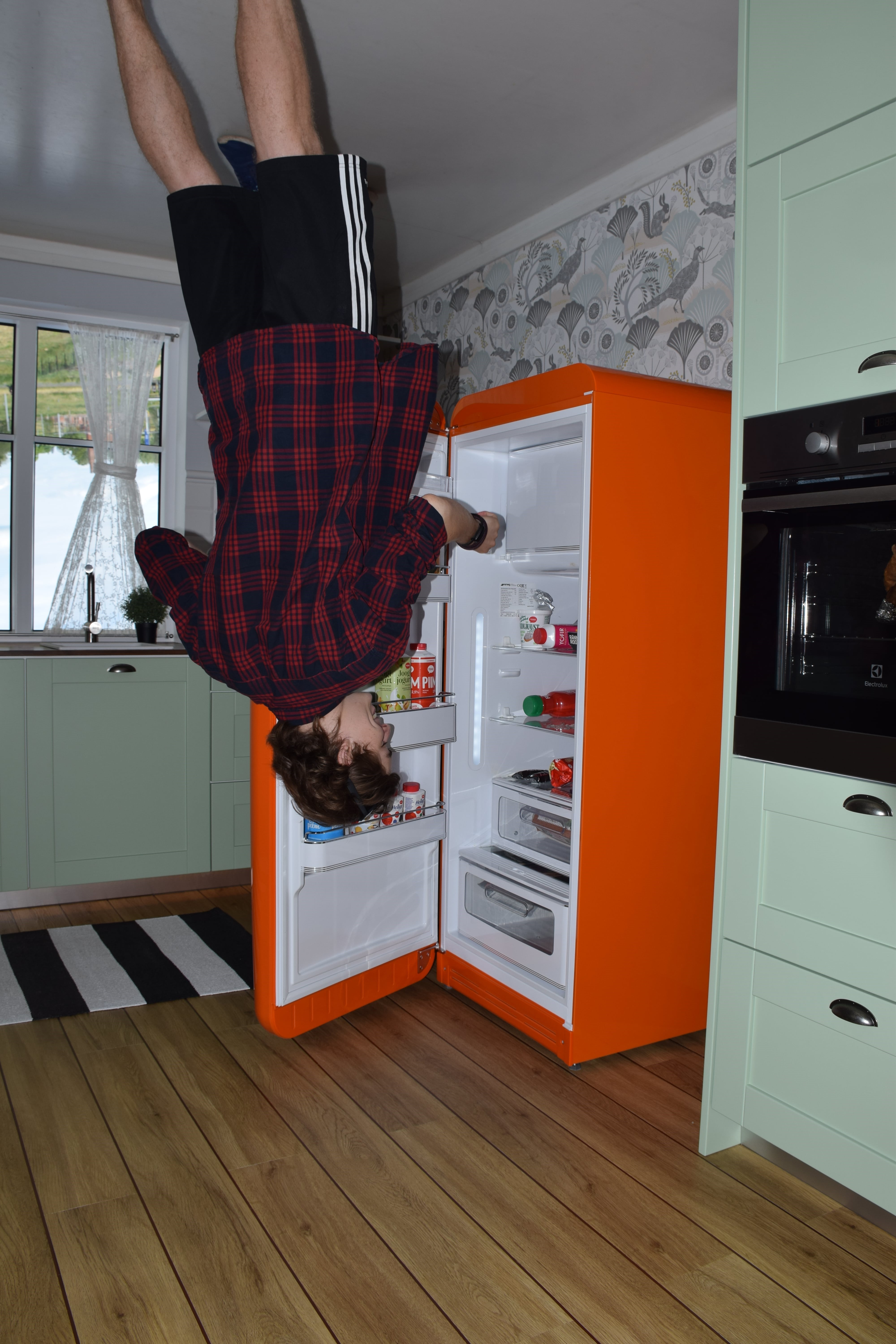 And if this wasn’t enough for one month, Tankla organized their annually summer school (Suvekool). This is a youth camp in a special location where the regular youth workers have to prepare and conduct some fun activities for all the participants. My part was helping Vallo playing archery golf with special made arrows for this. It is played by using the chain baskets from disk golf, a sport that is pretty common in Estonia, as goals. But the main task for us volunteers was yet to come. We needed to create a two-hour sport event for all of the 70 youngsters from scratch. The fact that our group of volunteers got decimated because of illness didn’t make it easier. In the end we put up a, in my opinion solid event, which was hopefully quite fun for the kids. But even then, it wasn’t over for us. On the last day we had to do the same again, but this time centered around team-building. Luckily, we got more help this time from the youth worker and after arriving back home the same day, we all were missing a lot of sleep and were spending some hours to much in the sun, resulting in the best night of sleep I had in a while. A perfect ending fora perfect month. 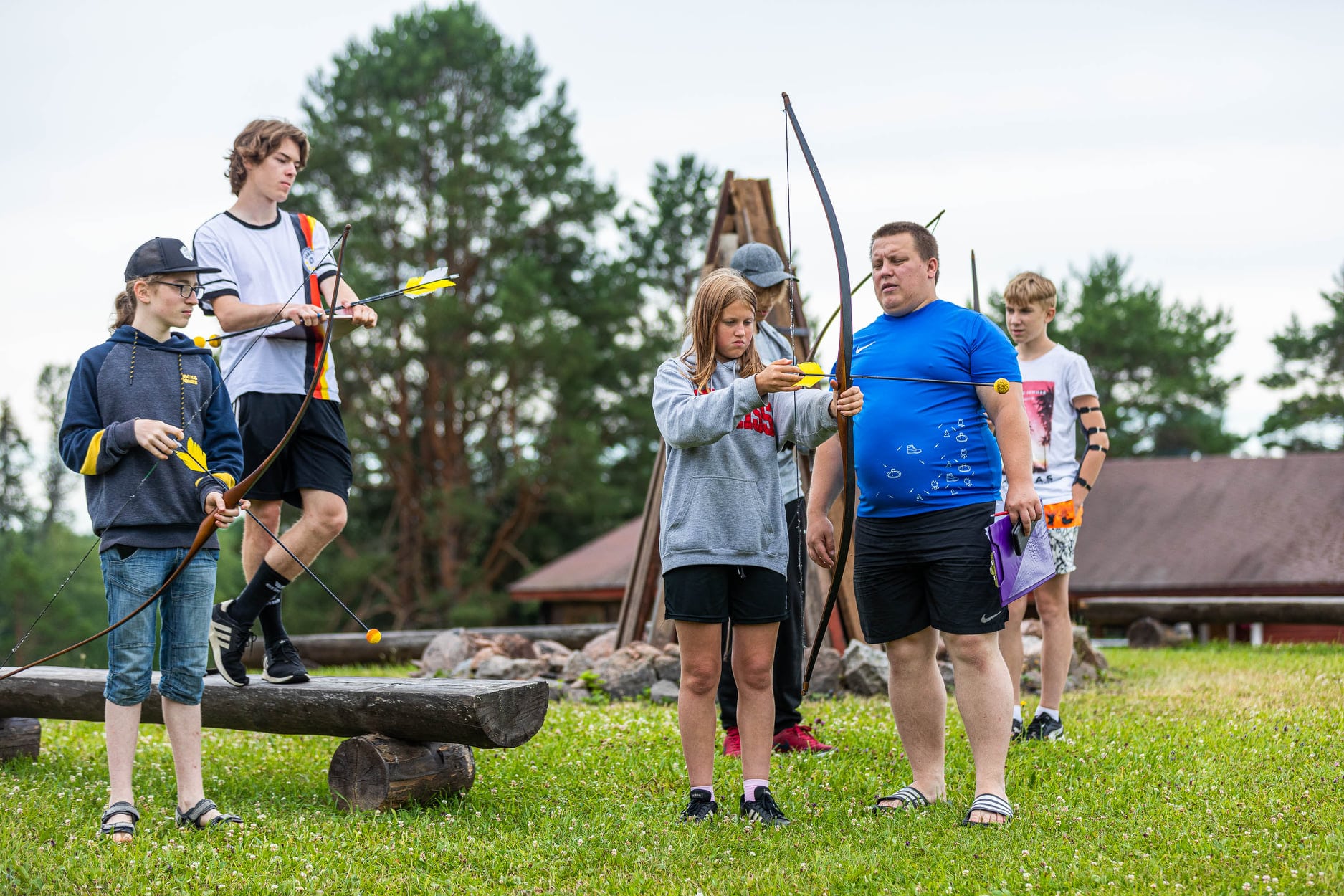 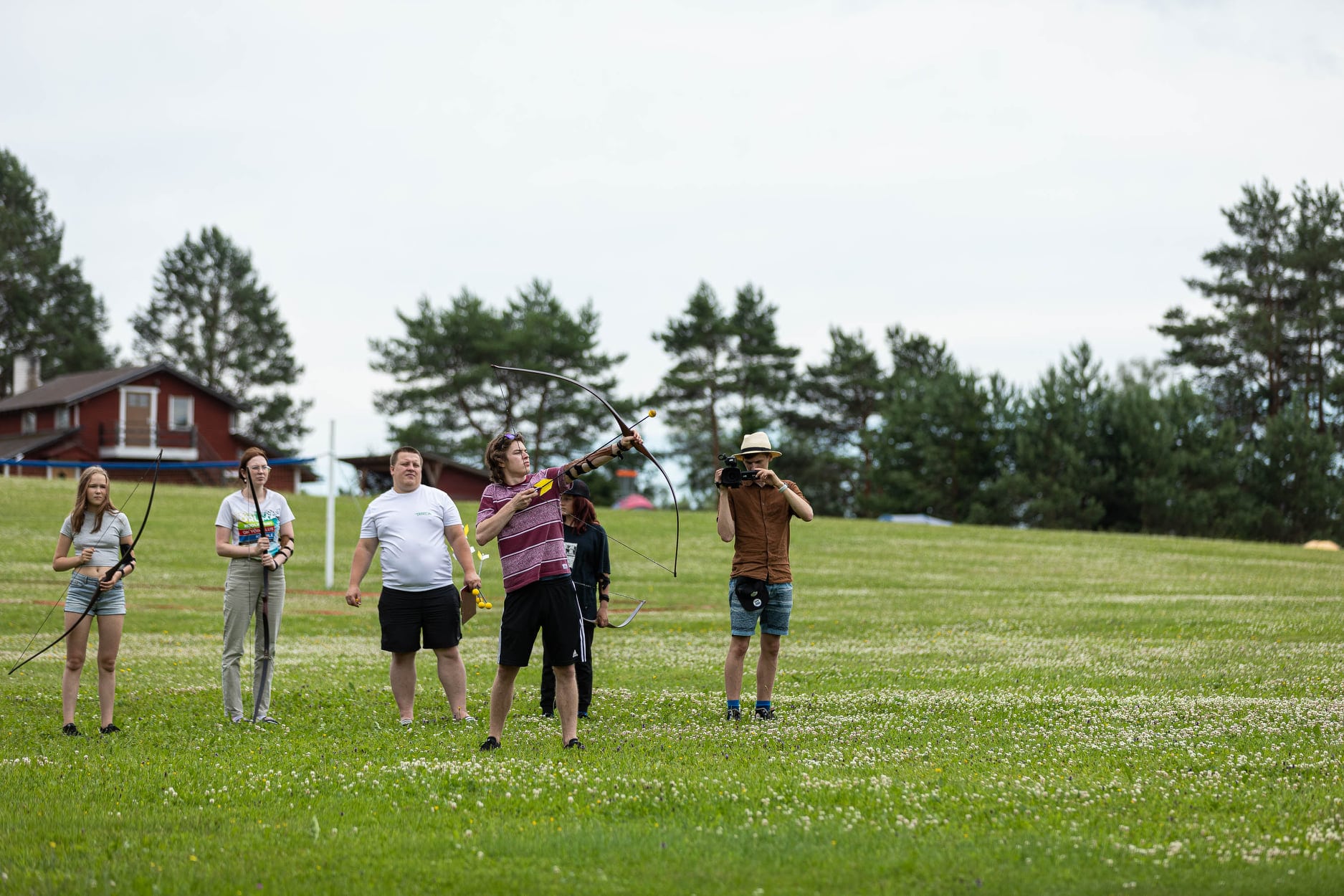