Hi there! My name is Flora and I will spend my next 10 months (because one month is now already over) volunteering in Hargla. I basically just turned 18 before coming here from Germany, so in the final days before my flight I started to worry: was I actually prepared to live abroad for a year, learn a new language, live on my own and experience a new culture?

When I first met Ronja, a fellow volunteer, she congratulated me on being prepared. Because according to her it rained way too much in Estonia and I was wearing a rain jacket. In my first one and a half months in Hargla, I have experienced so much more than rain and I can confidently say that I was in fact not prepared. But it turns out this is a good thing because that is what this year is about for me: going out of my comfort zone, experiencing new things, adventure!

So many things have happened this month! It feels like I’ve been here for at least three months. In reality, I arrived on September 21st to Riga. The first few days were quite calm, I got to know some of the youngsters and learned my first Estonian words. Still, I haven’t even had the chance to grow accustomed to the “normal” youth centre work, the everyday tasks, and events start. First there was the so called “Countryside living day”, where people could visit smaller villages and get an impression of what life is like there. Our youth centre also opened its door for that day, and I got to lead a crafting workshop. Unfortunately, there were very few visitors, but at least there were many animals! 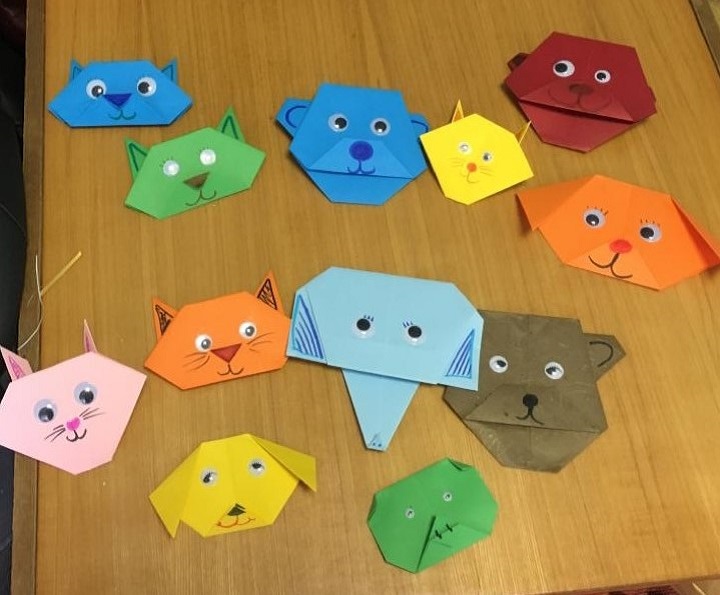 Some of the masterpieces

Next was the on-arrival training. This was such a fun time. Not only did I get to learn things that will hopefully help me during my voluntary service, but I also got to visit the lovely town (or city, as Estonians would call it) of Tartu, be in a sauna, and of course meet a lot of lovely people. Later in October I actually had the chance to visit one of them - Julia - who lives close to Tallinn. 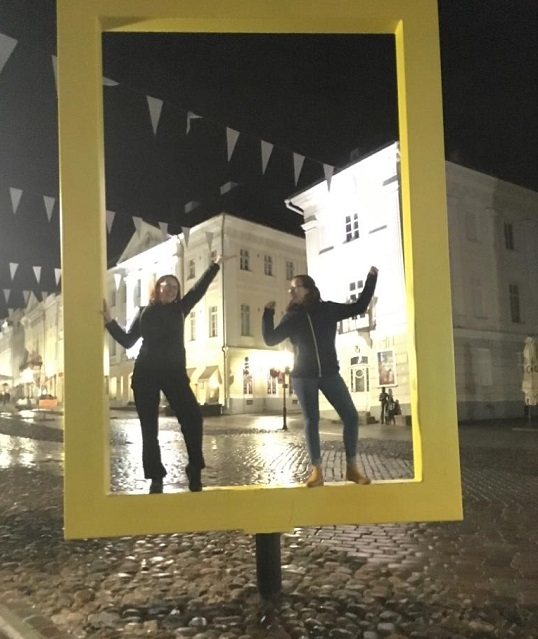 Julia and me in Tartu 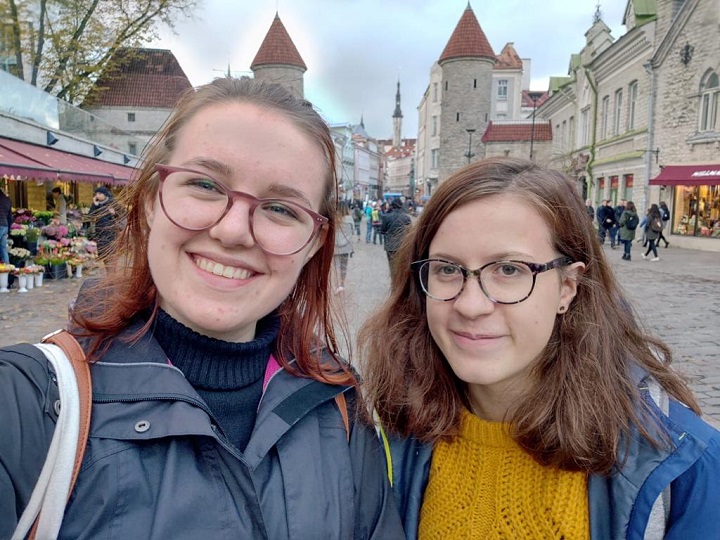 On the 14th, we had a lovely German culture night. I made a lot of food that I actually have never made before, but that is typically German. I tried making “Brezeln”, which you basically make by dipping yeast dough into a basic solution. They didn’t turn out perfect, but at least they looked kind of cute. Making “Spezi” was easy though, because it’s just mixing Fanta and Cola. I honestly don’t understand how this is not a popular drink everywhere…

The part that the youngsters probably enjoyed most were the games we played. Especially “Topfschlagen”. This is a game were some sort of present, like a candy, is hidden underneath a bowl or a pot. One child is blindfolded and has to crawl on the floor, following the hot-or-cold directions of others. When they manage to hit the bowl with a spoon, they earn the candy. Luckily Ronja spend this week at my youth centre, so she could help me with the event. After all, Austrian and German culture aren’t that different. 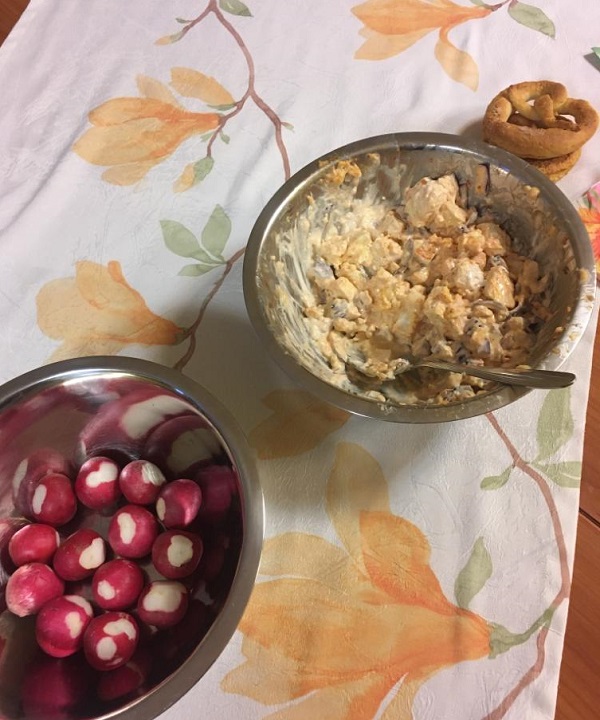 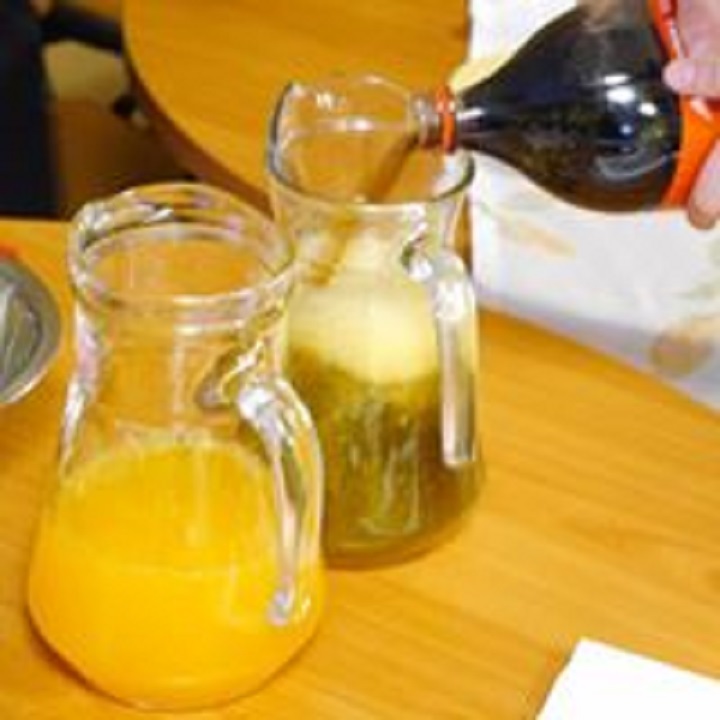 For the youngsters the highlight of the week was definitely the parkour-training in Värska. They do also have trainings here in Hargla, but there’s just not enough space or equipment. They were all very very excited, despite the almost two hour bus ride to Värska. I was impressed by how fearless some of them were, I would never dare to just do a backflip…

But of course, when this blog is about October, how can I not talk about Halloween? This was also a thing, the youngsters were looking forward to. They asked me in the beginning of October to do Halloween-related crafts with them in the Creativity-club. It was clear to me that we had to organize some event on this occasion. We decided to do a “Halloween Mystery”, were youngsters had to fulfill various tasks. These included watching a scary clip in a a dark room, touching cold spaghetti without seeing it and then guessing what it could be and wrapping each other in toilet paper, to make “mummies”. All of this was great fun, and in the end they managed to find the price: Candies that were hidden in a pumpkin that was inside of a trash bin. 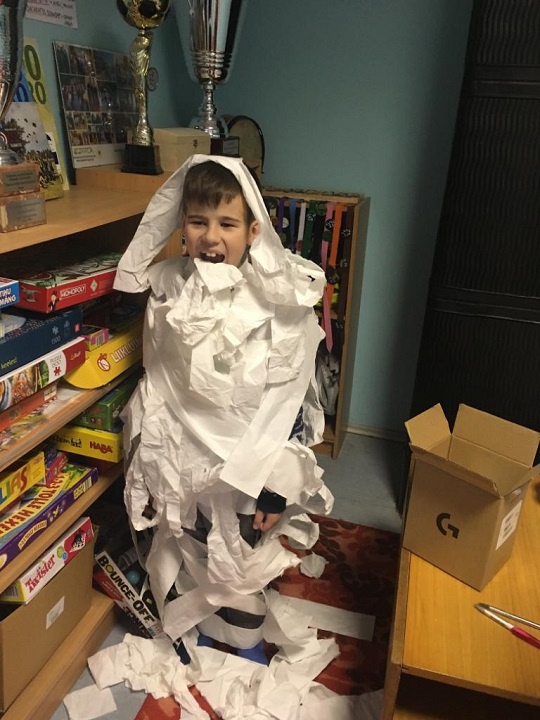 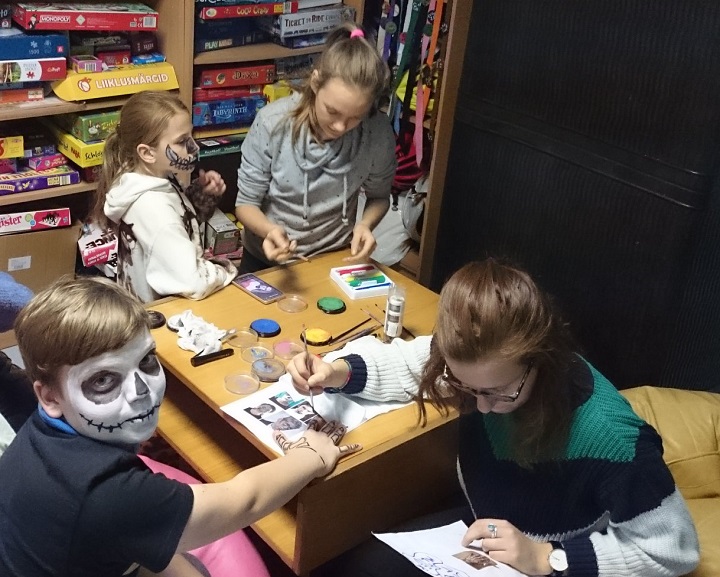 We also did face-paintings - of course

Whenever I have free time, I go exploring. The Karula national park isn’t far from Hargla, so one weekend I took my bike and went there. But here in Estonia, you honestly don’t need a national park to see stunning nature. It’s everywhere.

Then, one day, I saw Rasmus at the youth centre taking several sleeping mats and bags. I asked him where he was going and he promptly invited me on a fishing trip to the so-called “Motherriver”. Sadly, I didn’t catch anything and the others weren’t very successful either. This was probably due to that fact that I brought a banana, which unknowingly to me means bd luck. So we decided not to stay the night, but regardless, it was a cool experience, something I’ve never done before. 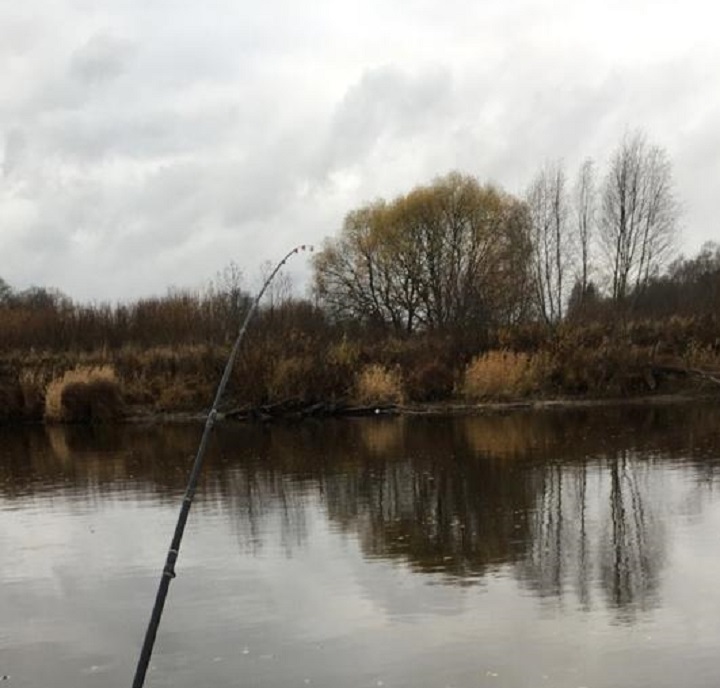 Last but not least: One of the best things that happened this month was that I met fellow volunteers living in or around Valga (and also some from another town fairly close by - Võru). We even went on a trip together to Pärnu. This is a really small, but beautiful city with a wonderful beach. It is considered the summer capital. Sadly, we didn’t get to see any sunshine, since there was quite the extreme storm - that cut off electricity for nearly all of south Estonia. The following days I had to live in darkness. Not only because of the lack of power, but also because winter time is coming, and of course we had to change to clocks. This meant that even if work ended at six, i had to go home in darkness and light some candles. The water was luckily only shut off for a day, then they brought a generator, so you could at least use water during the day. An experience to say the least!

A cute house in Pärnu 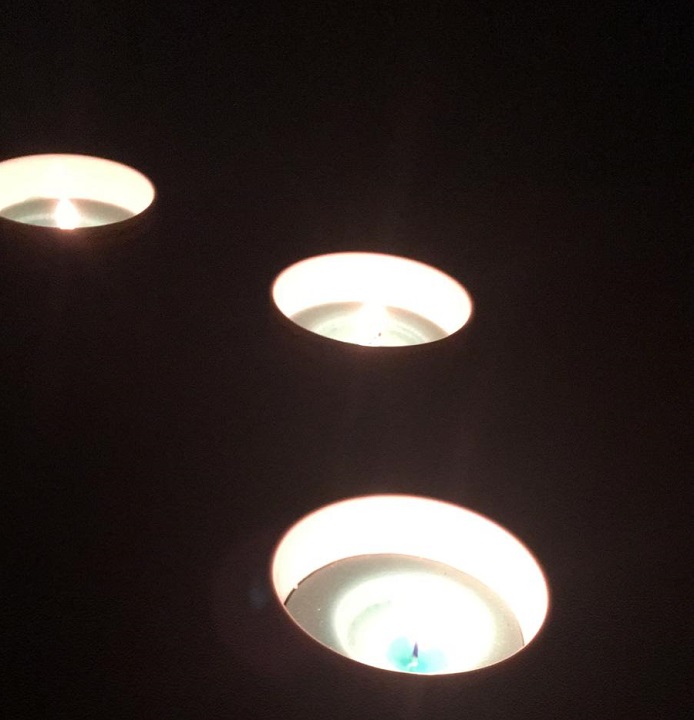