June marked the first time I fell somewhat seriously ill. Considering I work around children, it was inevitable.

So, this is the first month where I've had to properly contend with the concept of boredom at work. However, my quest to learn Estonian continues, as my tutor suggested I read the Little Prince in Estonian. I understood a gratifying amount, and I could follow the story well enough. Obviously it helps that this wasn't my first time reading the book. Luckily I didn't understand quite enough for the ending to tug too hard on my heart strings.

At the start of the month I had a chance to speak at a school in Valga about volunteering and Finland. It was a very interesting experience for me because, while I've spoken at schools before, this was the first time speaking about something I was so new to. However, when in doubt, pull out ludicrous Finnish words and do tongue-twisters with the kids. 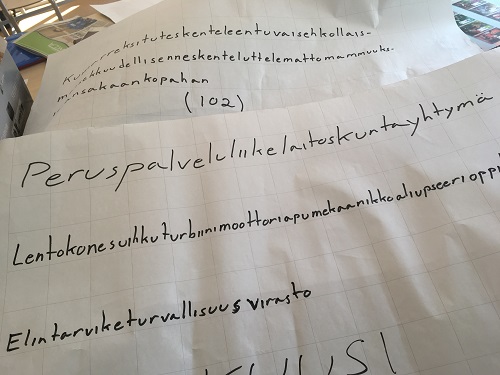 The weird thing about working in a youth centre when the weather is lovely is that the absence of kids gives an excellent chance of sweeping up all the sand and miscellaneous grime that the kids have brought with them. Truly a feat considering we have a no shoes policy in the centre. They must just carry it in their pockets. You never know when you need a sneaky bit of pocket sand.

Sometimes it feels like I could make a slightly cleaner child with the contents of the dustpan. 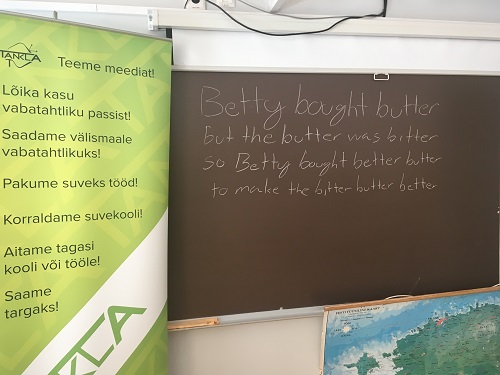 Other than my forays into the written word, I also made lemon cake with some of the kids. It still amazes me how invested they can be when the result is something that they can eat. But it is also quite funny to watch their patience being tested by the uncompromising beast that is the oven.

Around the middle of the month I was supposed to go to a water park with the kids and some of the other workers, but sadly my tale takes a turn for the worse here. The flu that I had been carefully cultivating had refused to shift, and eventually took a turn for the worse. So, while the kids were enjoying the weather I was enjoying the attentions of medical personnel.

It's not all bad though. I might have come down with pneumonitis that required antibiotics, but I also had my first ever cat-scan. Silver linings and all that. 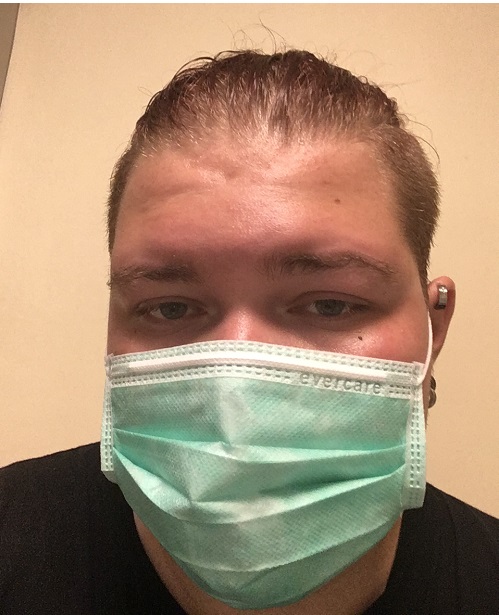 I had to take a couple of days off work because I was too sick to move, but I ended up regretting it almost immediately. It's funny how important a routine becomes after a while, so I was sat at home miserable and at a loss for what to do. Interestingly, this is two months in a row that I've had a reason to take a selfie while wearing a face mask. Huh.

The highlight of the month was the midsummer event we did here in Lüllemäe, where we did some games for the kids to compete in. Two teams competed in the sack race, the egg race, carrying water with a sponge, and other such classic summer games. The funniest part of the whole thing was how seriously the older kids took it, but it was also very nice to see the older kids actually participating. I'm personally so used to older kids being too cool for school when it comes to things like this, so it was nice to see them actually take part and work with the younger kids.

Although when most of the contests were all about speed, it was impossible to separate the idea of speed from carrying water with a sponge. We as the organisers only paid attention to the amount transferred, but the kids clearly had their own contest going on the side.

July looms, and it promises to be as eventful as June was uneventful.