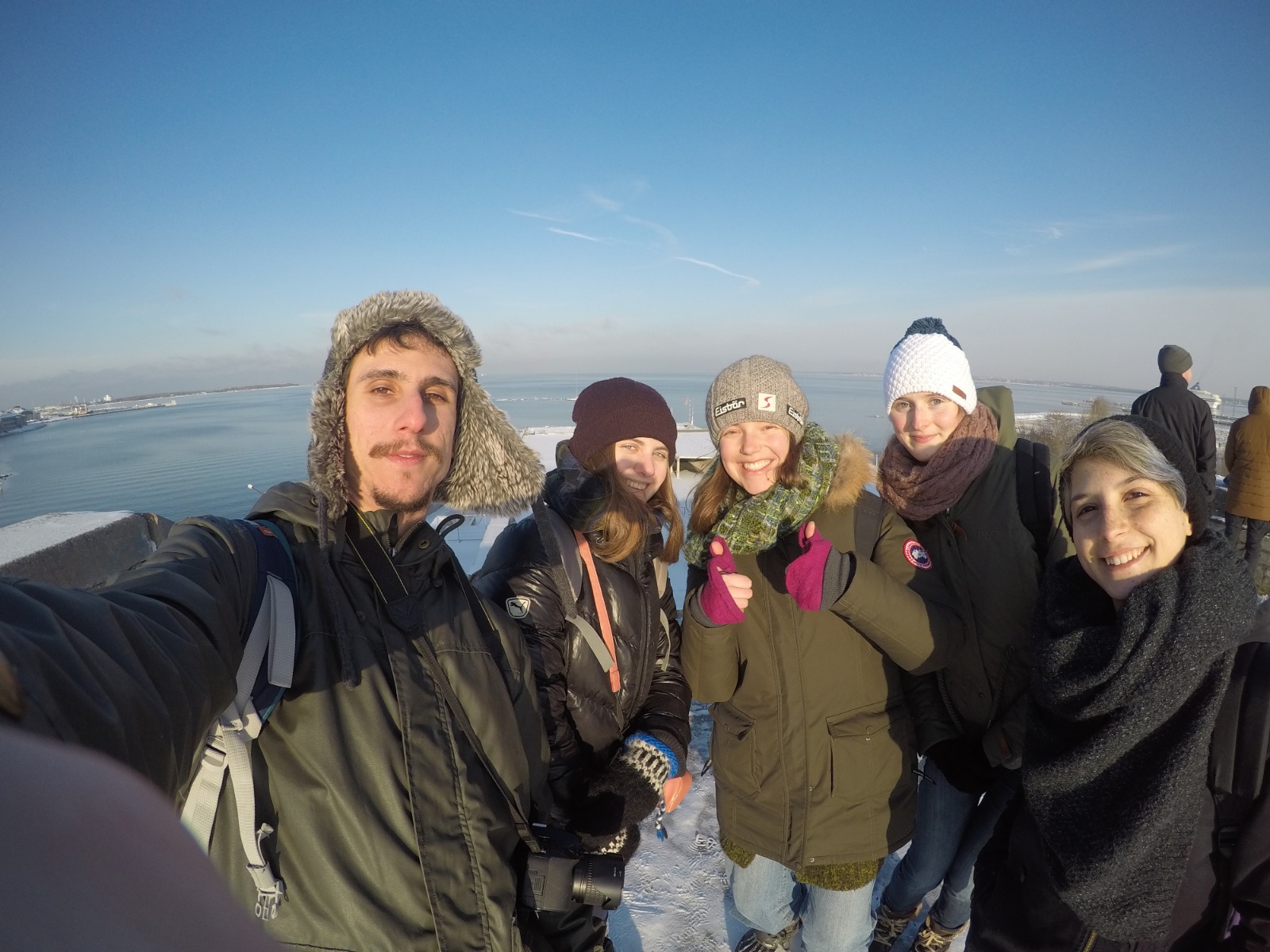 The new year has just started and suddenly the first month is over already – how fast time can pass when you have something going on all the time. Also, I was counting the days, and it’s a strange feeling when you realize almost half of your EVS is done already... (actually, as of today (07.02.) I’ve been here for 161 days – and just 174 still to go)

But let’s not focus on the end just yet, instead let me tell you about all the interesting and fun things I did in January!

Firstly, you may have noticed that I gave up the blog layout I had for the last 4 months. But I thought since the new year always stands for changes and new beginnings, I’d take a new approach to the blog writing, too (well, maybe part of the reason is also that I couldn’t think of anything starting with the letters ‘J’ and ‘Y’ :D). So, welcome to my January:

In the Youth Centre

The new year started already with quite a lot of activities and events at work. First of all, it was finally time to make an event I had been planning for more than 2 months now but that never worked out for some reason or another: My Murder Mystery Dinner! I already came to Estonia with the idea of doing something like that and I’m glad I eventually got the chance to. For those who don’t know what it is, here’s a short explanation: It’s basically a roleplay, where the guests come together for a dinner, portraying different characters. But it’s not just a normal dinner, because someone gets killed and now they have to find out who the murderer was. It was a new experience for all of us and I was a bit afraid of how it was going to work out. But in the end I was positively surprised at how well it went and we spent a nice evening with a lot of good food, trying to figure out the murderer of Robert Jääger aka Rasmus :D. (Spoiler: It was Margareete – his wife and secretly undercover agent – aka Kadri) 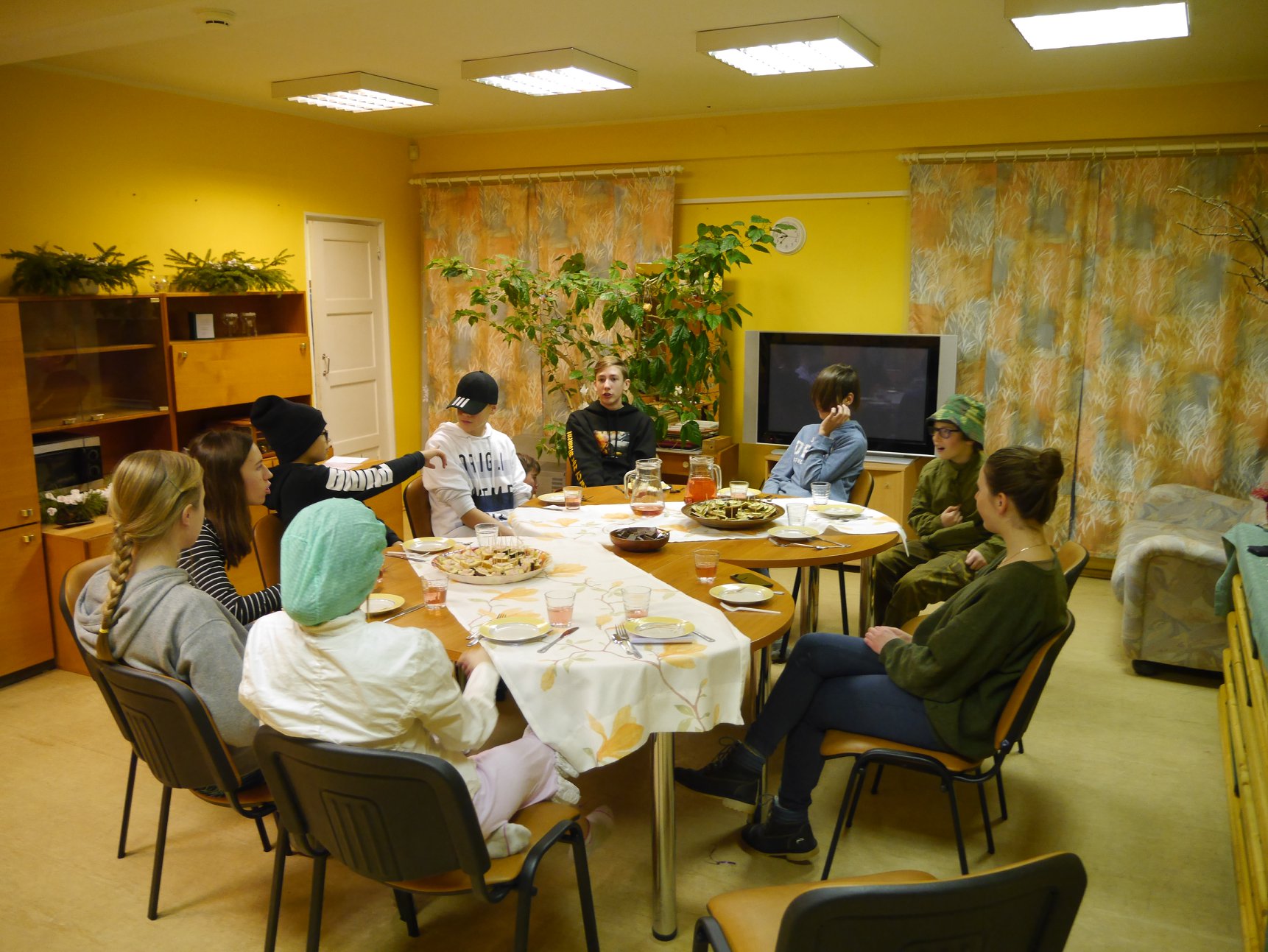 And after the criminal dinner some more youngsters joined for a youth centre night, but I left after some games and a night walk through a very snowy Hargla, because I was very tired and had to get up early the next morning, since I was going to Vilnius early! :D (about which I will talk a bit later.)

Some other events in January included the 3rd part of the brain game and another board game night where I got to know another new game: Saboteur. It was really funny to play and will be even more fun with the expansions we’re planning on buying.

Of course, I also continued with my crafting club and we could visit the ceramic workshop again. This time we painted and finished the cups we had been modelling the last time. Let’s see how they turn out after having dried :) 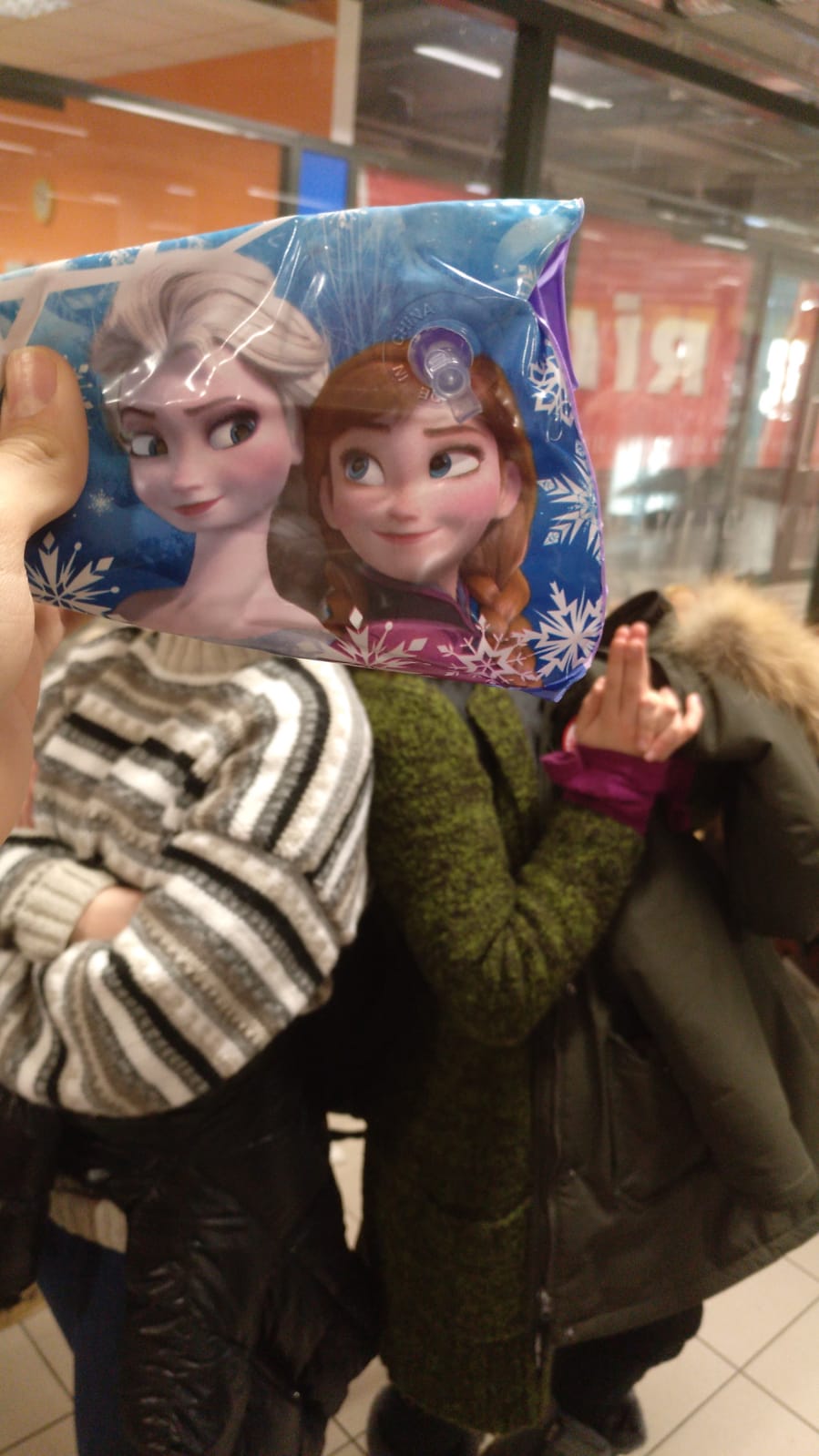 Next to the normal working days in the youth centre, I also did some other tasks for the Tankla organisation. For example together with Gabriel (and some other volunteers) one weekend I visited Valga. There we checked out (almost) all the Second-Hand-Stores (and there are a loooot of them!) as a sequel to our Tõrva Second-Hand-Shop-discovery tour. You will be able to read about that day on the Tankla website soon, hopefully. On the picture to the left you can see a preview of us playing around with the stuff we found in the shops.

Also, for the Tankla newspaper I wrote an article about a topic that really matters to me: Waste. We all produce so much unnecessary waste and that’s why I tried the Zero-Waste-Challenge for a week, which means producing and shopping no packaging, wrapping, waste, etc at all. If you’re interested how it went, the newspaper will be published (also online) soon!

And as the youth centre was closed one day, I worked in the kindergarten once again, which was a fun variety to the youth centre (but to be honest, I’m happy that the kids in the youth centre are at least all able to go to the toilet alone and don’t need help getting dressed anymore :D)

There are some sports/sporty activities that I have already written about a few times, like the Parkour, the riding and the dance club. Of course I also continued with these in January, but in addition I also tried some other sports this month: Once I went to the sports centre in Võru with my volunteer friends, which was cool, because I had the possibility to run again. Since we’re in the middle of winter still, it’s quite cold outside so I hadn’t had the chance to that in a long time. But I’m not the one to complain, after all we’ve been having the most beautiful winter wonderland throughout all January, which I could enjoy on some walks through the snowy landscape! :) 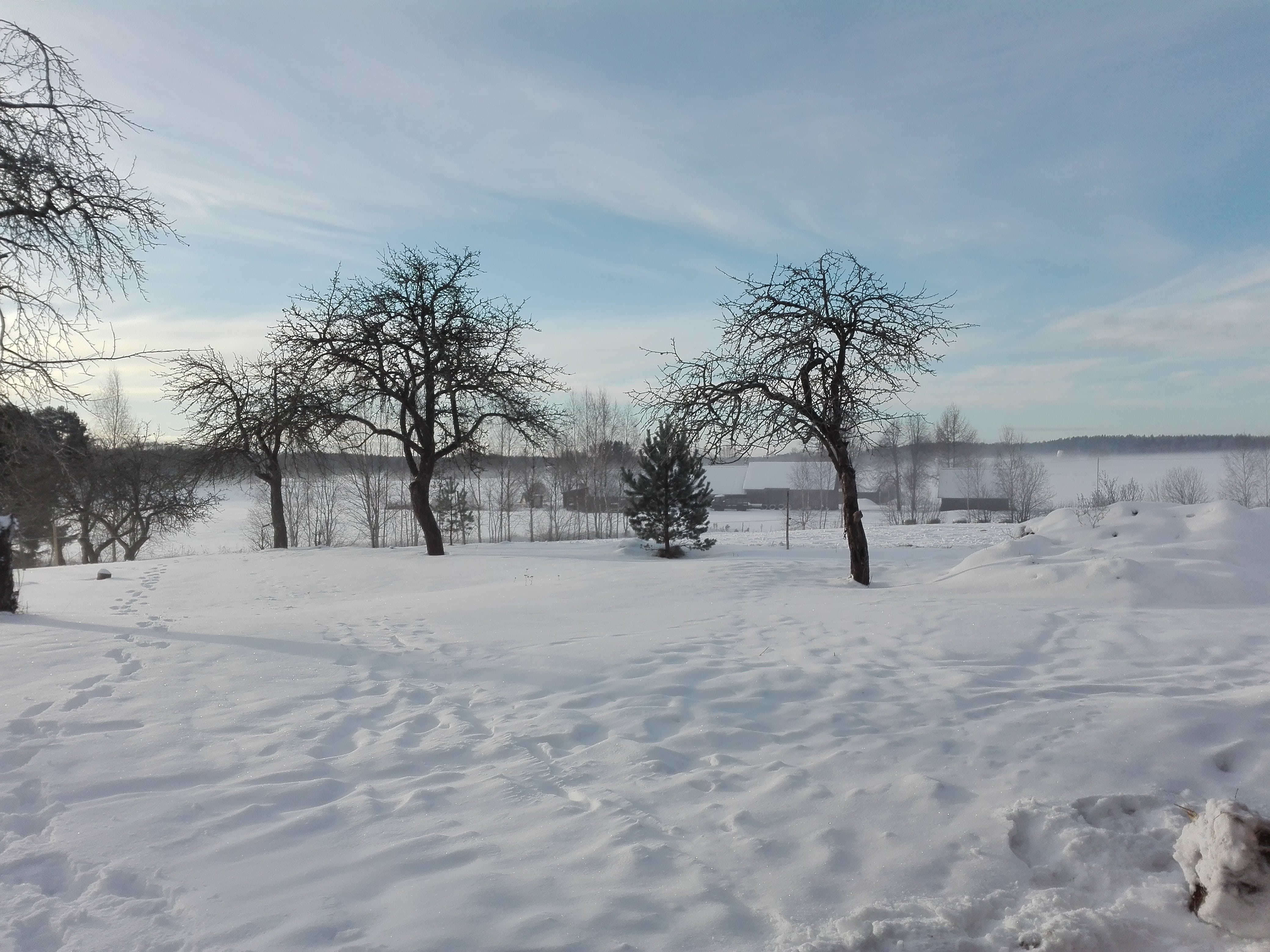 Furthermore, I got the chance to do ice skating once again after almost one year – we visited a small open air ice skating arena in Tartu. And after some time getting used to it, we felt almost like professional figure ice skaters. :D And I heard that there are plans to also make a small ice skating place in Hargla, I’m really excited about that!

And last but not least I joined Rasmus for a volleyball training once. The last time I had played that was in my PE lessons, where nobody even knew the rules. So, I was naturally a bit overwhelmed when suddenly playing with a group of older, almost professional men (they were very friendly, though, and even tried to talk to me in German). Overall, I would say it was an interesting experience. And with interesting I mean that I had bruises all over my arms the next day, so let's see if I will dare to try it again :D

Aaand one of the most fun parts of January: travelling! I even got the chance to visit TWO new countries in just one month: Lithuania and Finland. First, I got the chance to get a ride to Vilnius, since two girls from there I got to know where staying at my place and I could join them when they drove back. It was a quite cold and snowy weekend, but I still got to see a lot of the city, which I liked very much. Especially all the street art in Užupis, one of the districts, was super lovely. But I’d love to go back again when it’s warmer to see Vilnius also in green. 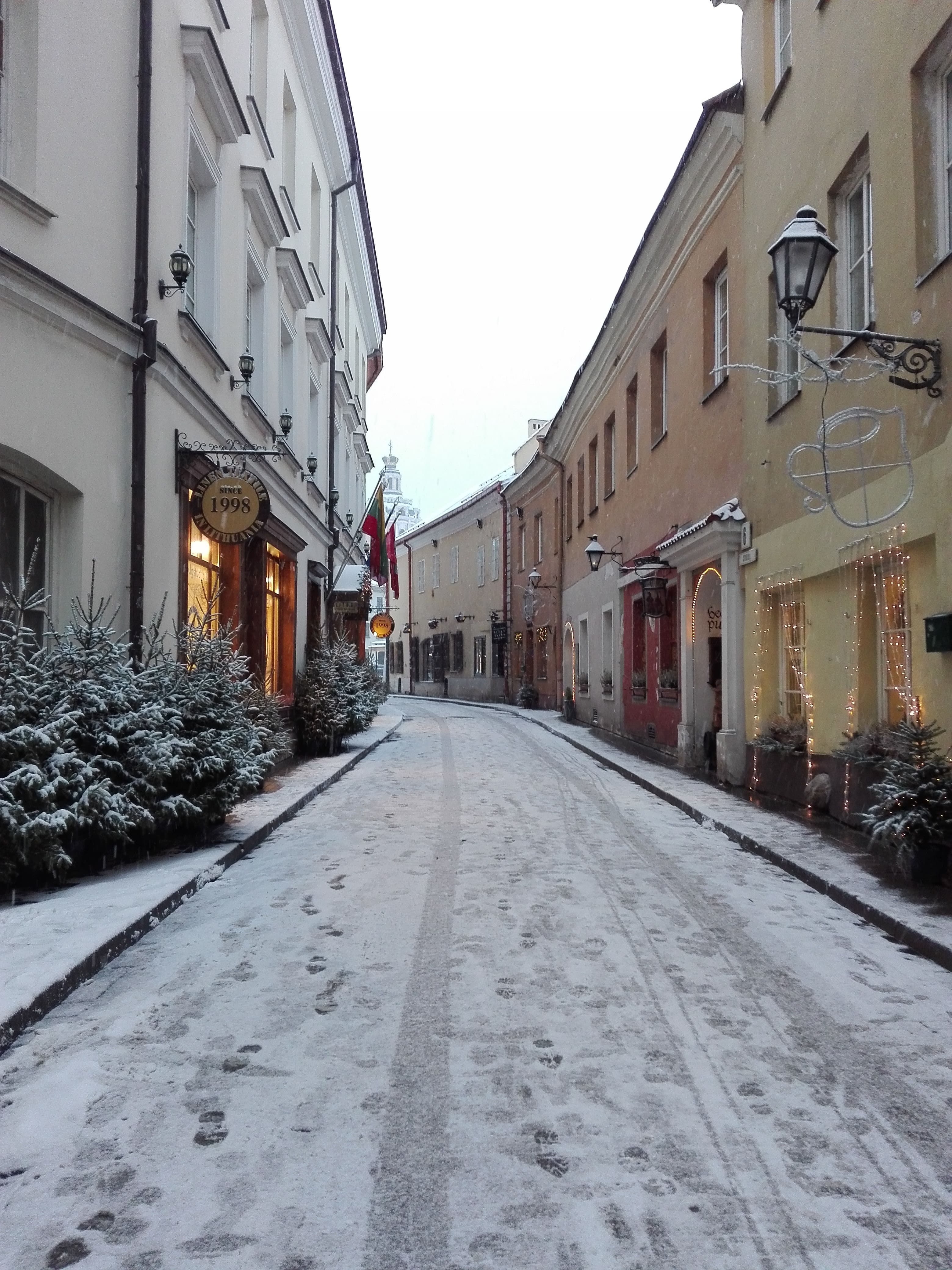 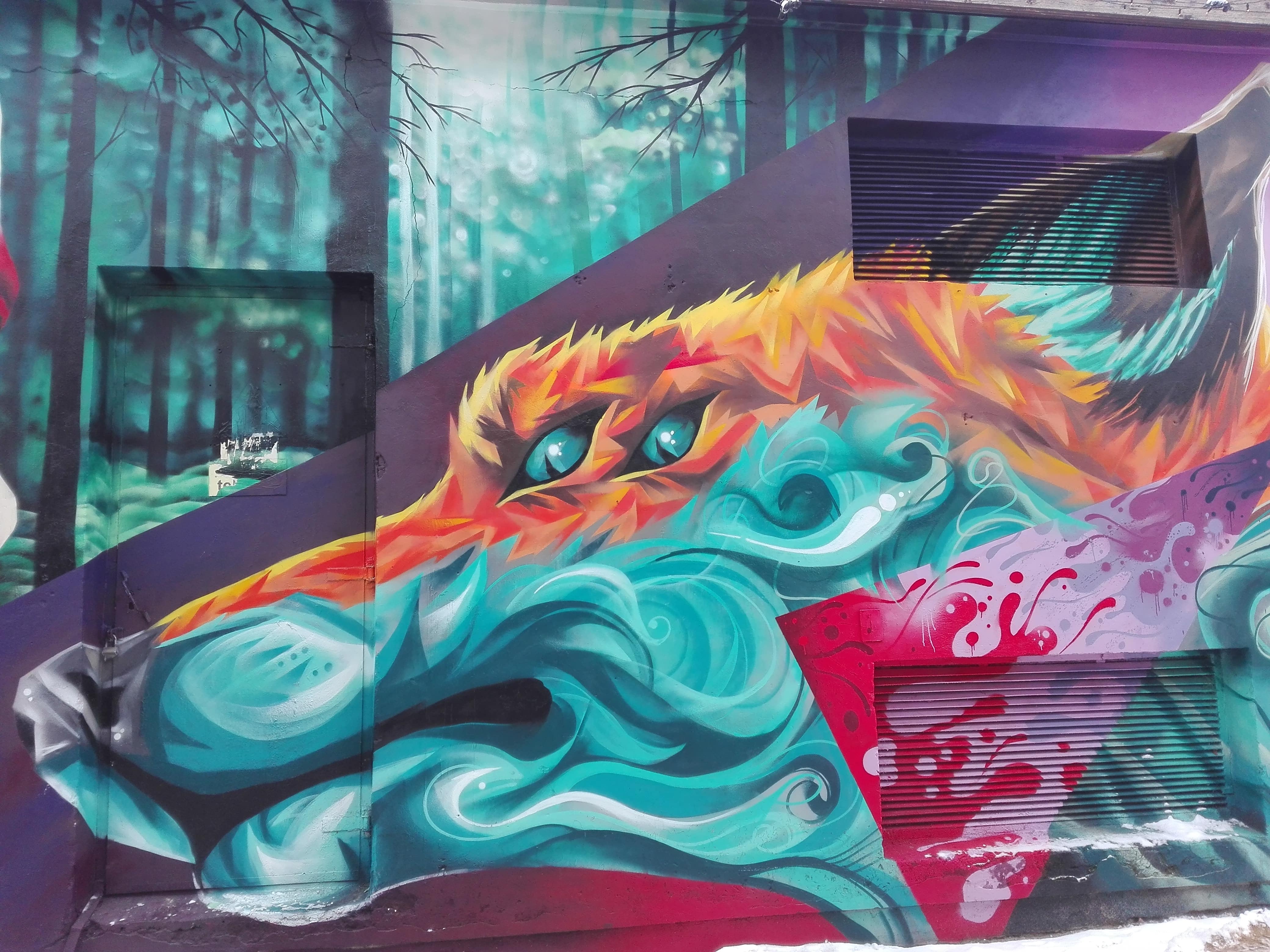 And secondly, one weekend I had planned to visit Helsinki with some volunteer friends. We were supposed to take the ferry from Tallinn on Saturday noon. However, we kind of missed the check-in and couldn’t get on the boat anymore. So we had to rebook and take the next ferry in the evening. Instead we spent the day in Tallinn, visiting the very frozen and slippery Linnahall (more like Linnaslide, I’m surprised I got down there alive!) and enjoying the views of white Tallinn. 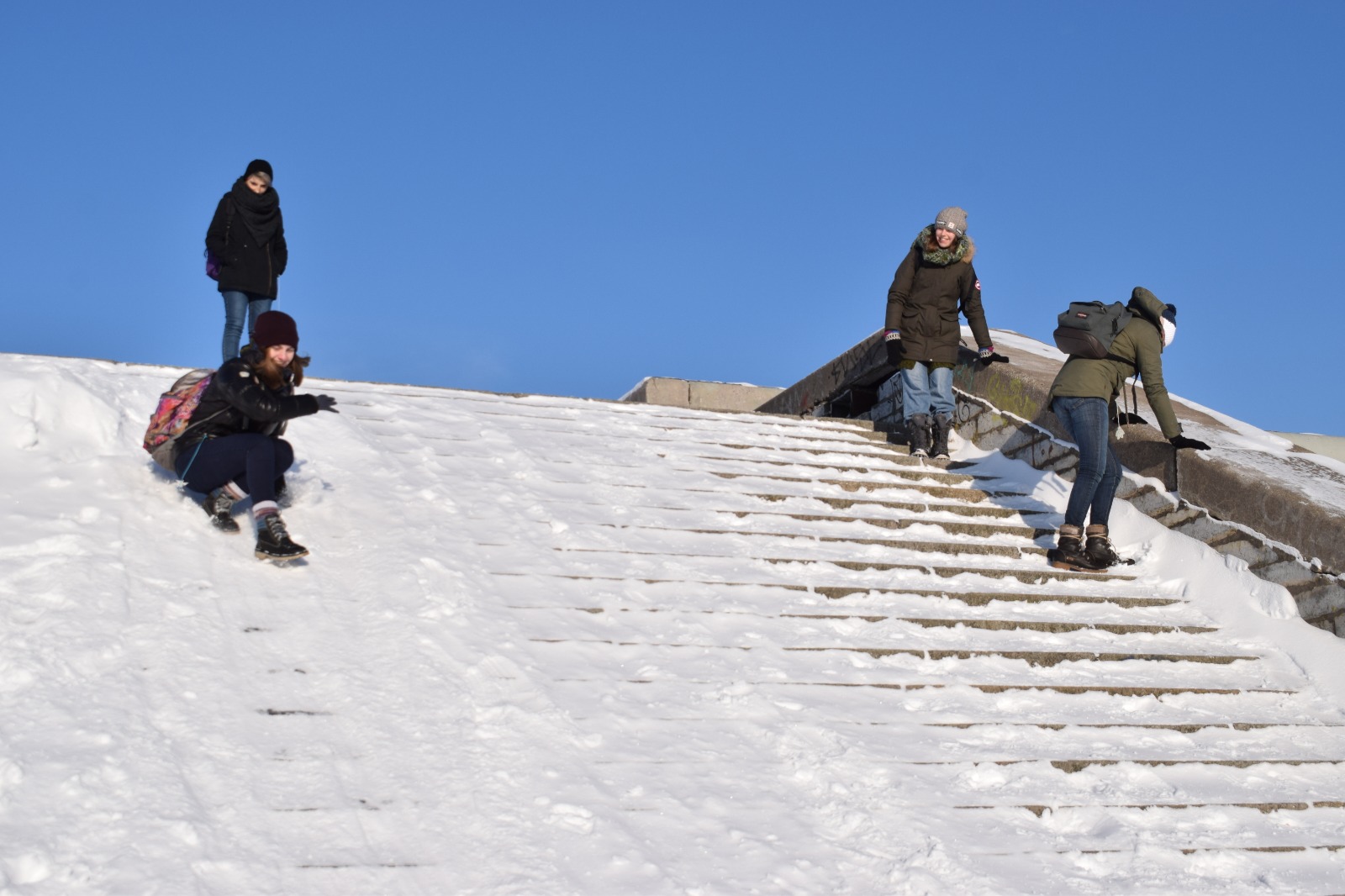 In the evening we luckily didn’t miss the ferry. When we got on it we all were astonished by how huge it was, there even was a supermarket. On a boat!

Finally, we arrived in Helsinki, but it was already dark so after eating we went straight to the hostel (were we played a cool flag game with an Estonian guy we met and shared a room with as many people as there are letters in the alphabet (my bed was “Q”, and yes, the sleep was exactly as restful as it sounds…)). On the next day we had just a few hours to explore Helsinki since our ferry back left in the afternoon already. So we got up early and went to the city centre. But it was soooo freezing, that you couldn’t even stay outside for more than 30 minutes. Brrrr! Still, we managed to do some sightseeing and could even enjoy the nice winter sun while walking on the frozen sea to some little islands. Those views were definitely my highlight of the day! 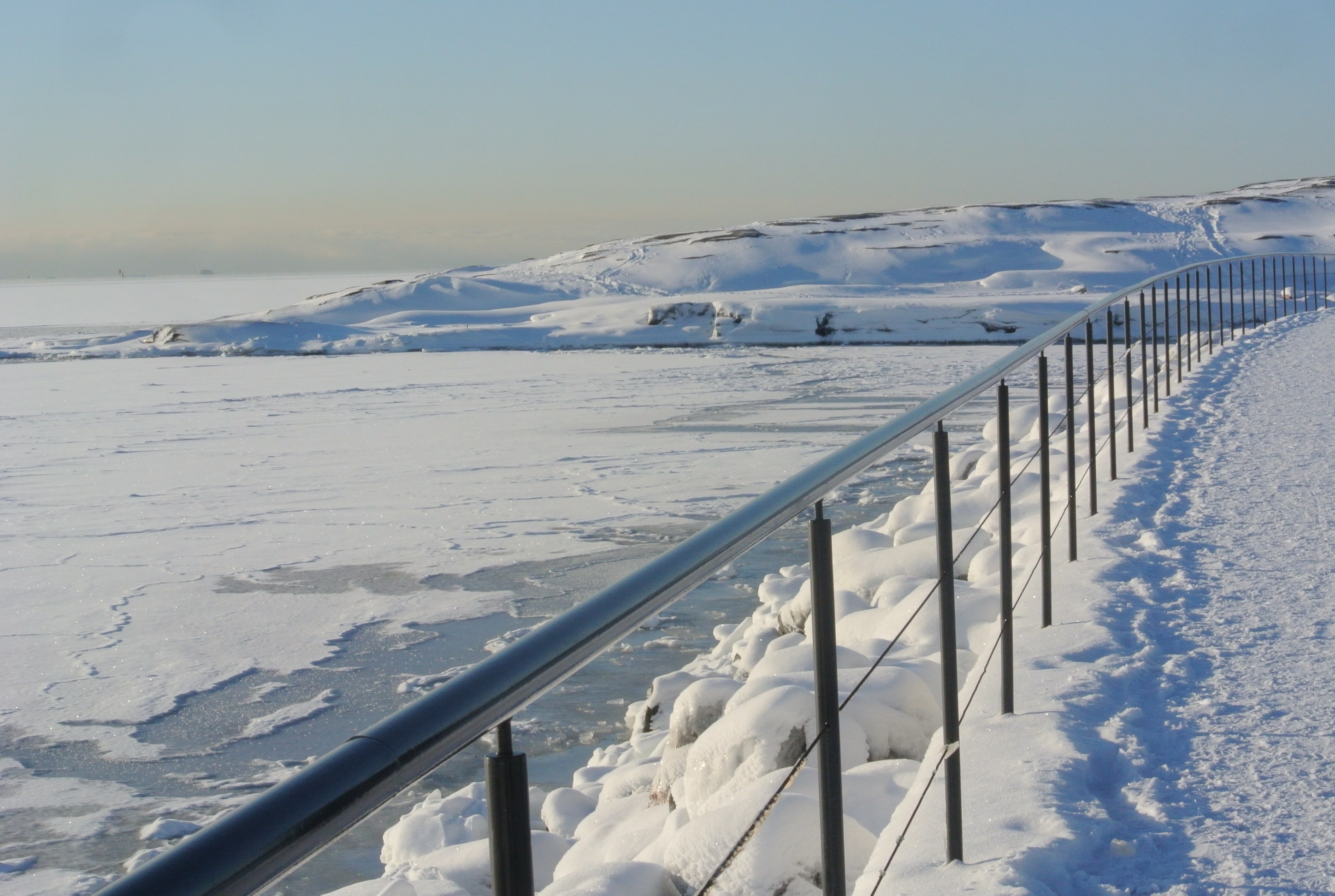 Sooo, that was it – a very fast and very interesting January! For February, get ready for another month packed full of activities, events and first-times!