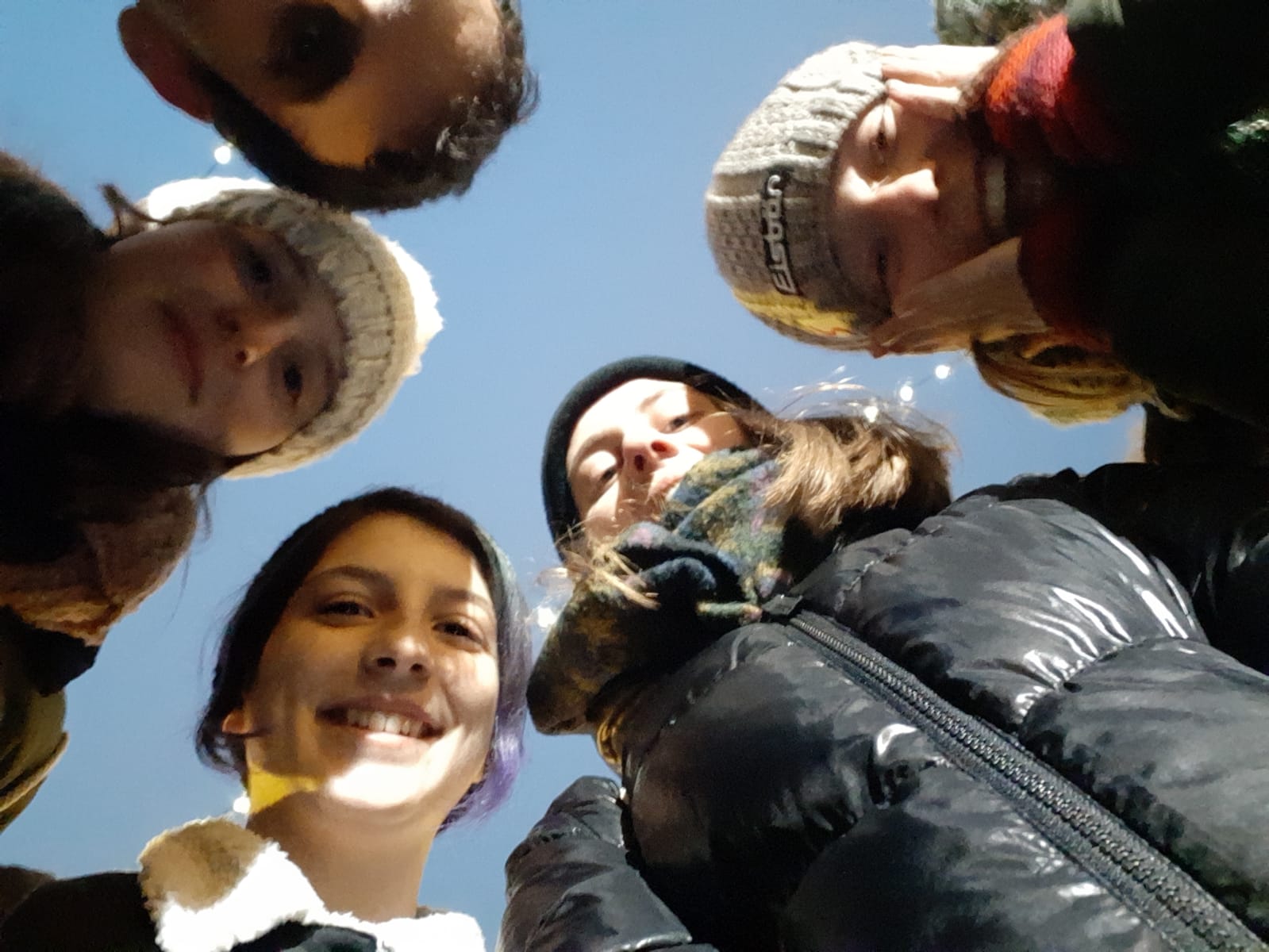 So, that was it... The last month in 2018 and my fourth month in Estonia. Looking back, those four months went by so fast, they feel like a blur. If someone asked me, I couldn't even tell them if an event happened like in October or just a week ago. Good thing I have a calendar where I write that kind of stuff down, otherwise I wouldn't have been able to create the following list of things that happened in the last month. So, here you are - that was my December:

In the middle of December there was an event in the school. There the students (or mostly Rasmus) had to organise a special school day with different workshops, for example photography, vegan cooking and even some American soldiers came. I also took part and did some Christmas crafting with the younger students and we made some experiments (which worked surprisingly well – in contrast to when I tried them on my own the day before :D) The day started quite early (but it’s definitely easier to get up in the morning when you know pancakes with jam are waiting for you in school!) and it also lasted very long.

Because right after that special school day was finished, the next event took place in the youth center: The Jõulumaa, Winter Wonderland. There again you could do some workshops focusing on creating christmas decoration ornaments out of nature products. Another thing you could do was decorate gingerbread (I loved that, especially because you could eat them afterwards!), there were Just Dance competitions and a lot of snacks, music, dancing and games. 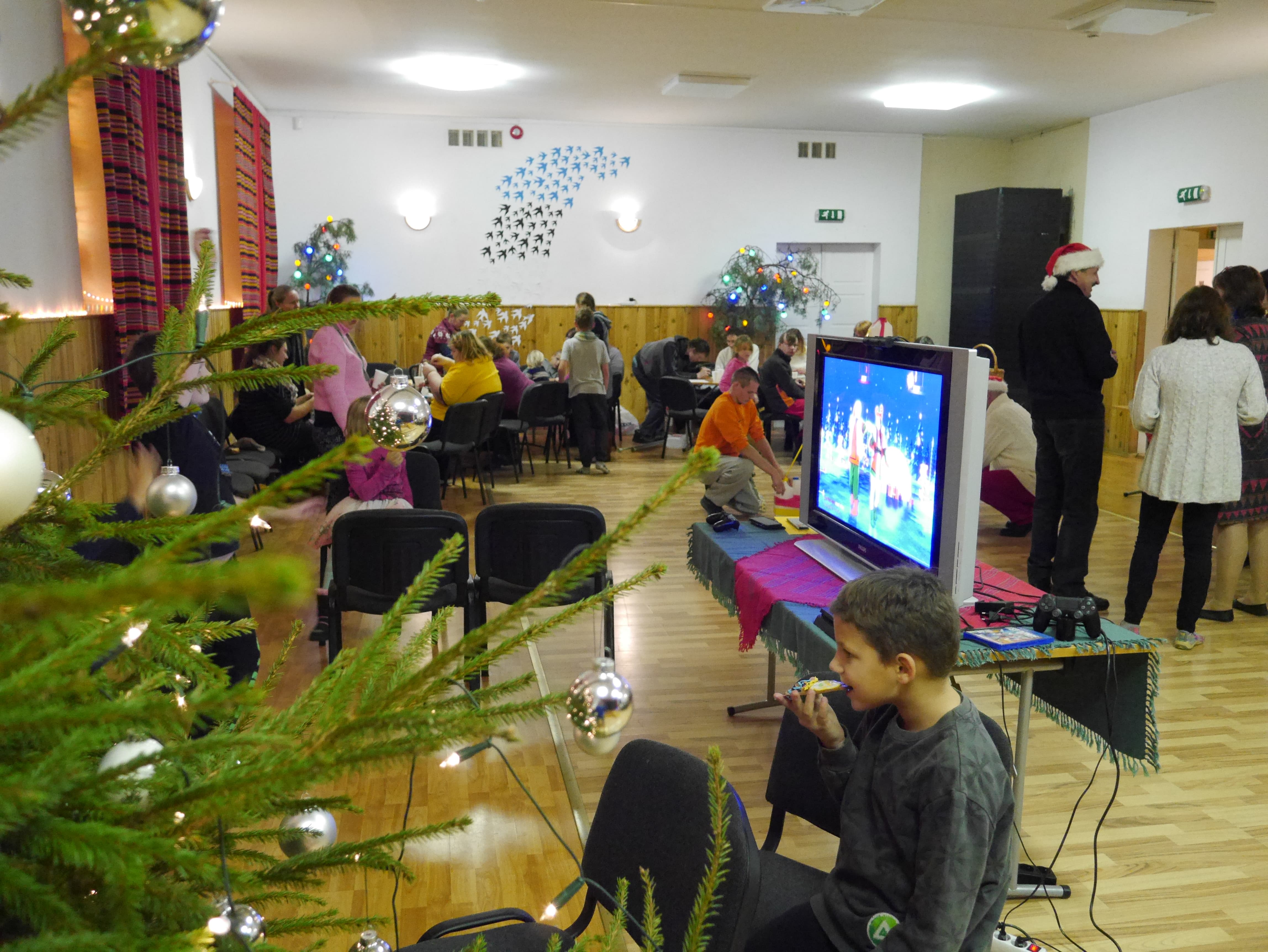 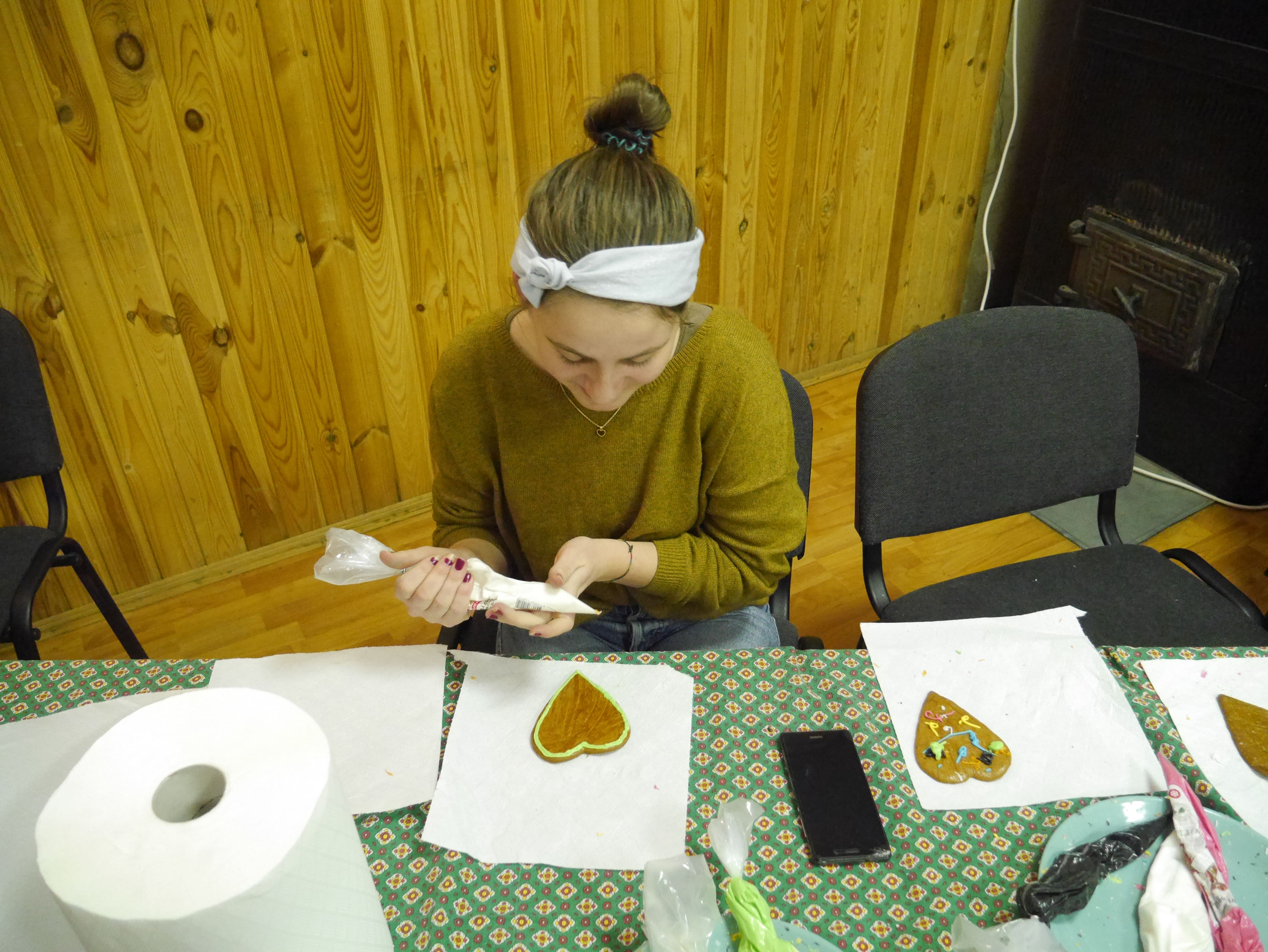 ... E as in Estonian folk dances

One weekend I was visiting my volunteer friends in Võru. On that evening they had some kind of big folk dance event on the main square. And since it was too freezing outside to just stand motionless for more than 5 minutes, I decided to also join the dancing. However, me and my dancing partner Eleonora, another volunteer from Võru, had never done those dances before, so we had no idea what was going on most of the time and were just hopping around weirdly. We felt so sorry for all the people around us, but it was still a lot of fun.

... C as in Ceramics and – of course – Christmas stuff

December held the possibility for me to try doing ceramics with my crafting club. I haven’t done that in a long time and it was fun to ’build’ something with my hands and play around with the clay again. We made cups and in our next ceramics workshop we will colour them, I’m already loking forward to that! 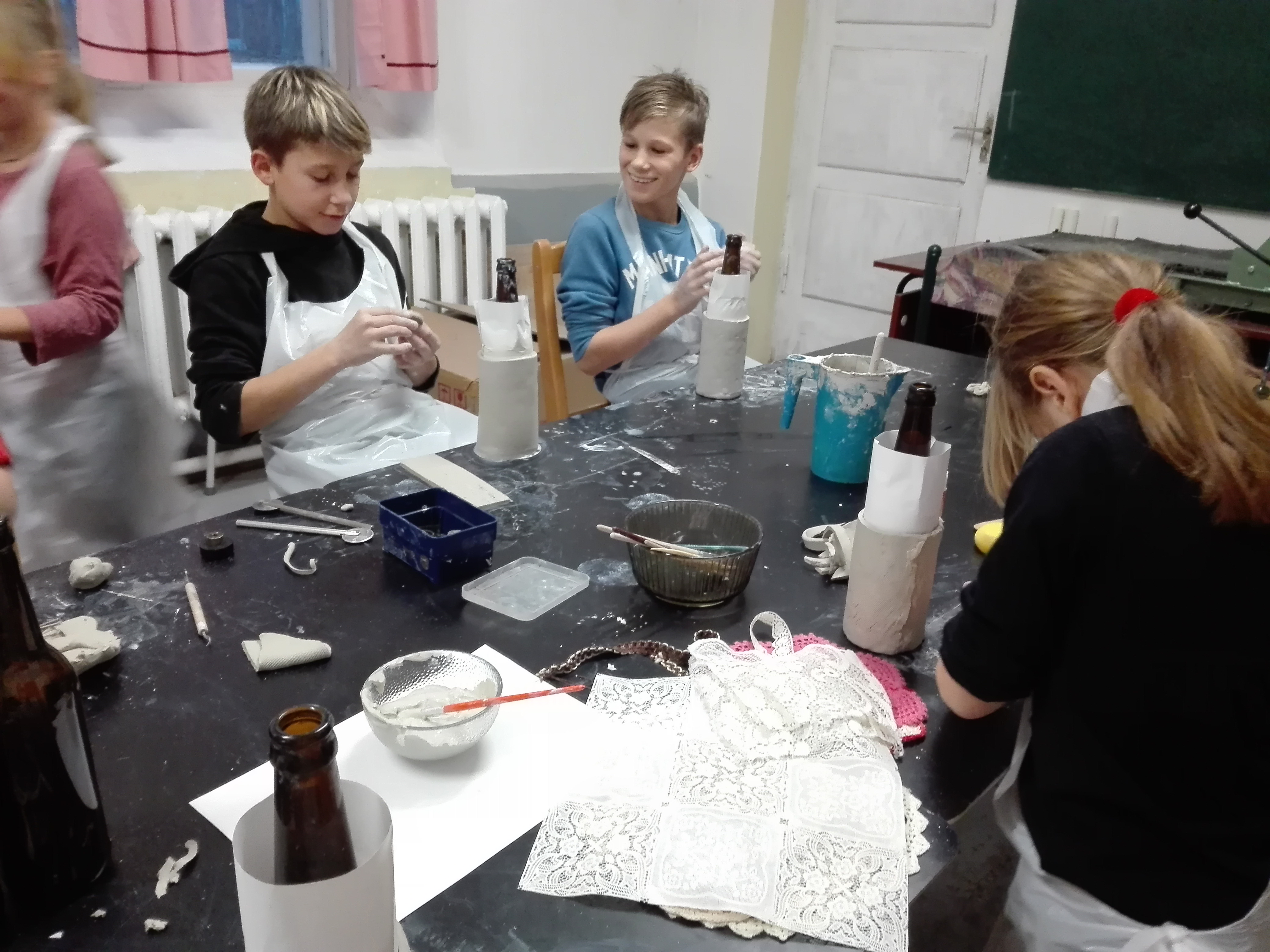 And since it was December – which usually means Christmas is coming soon – there were a lot of events and things about that. First of all, a bunch of Christmas parties took place. One, where people were talking in Estonian for ages and I didn’t understand anything (but there was food, and a fun game 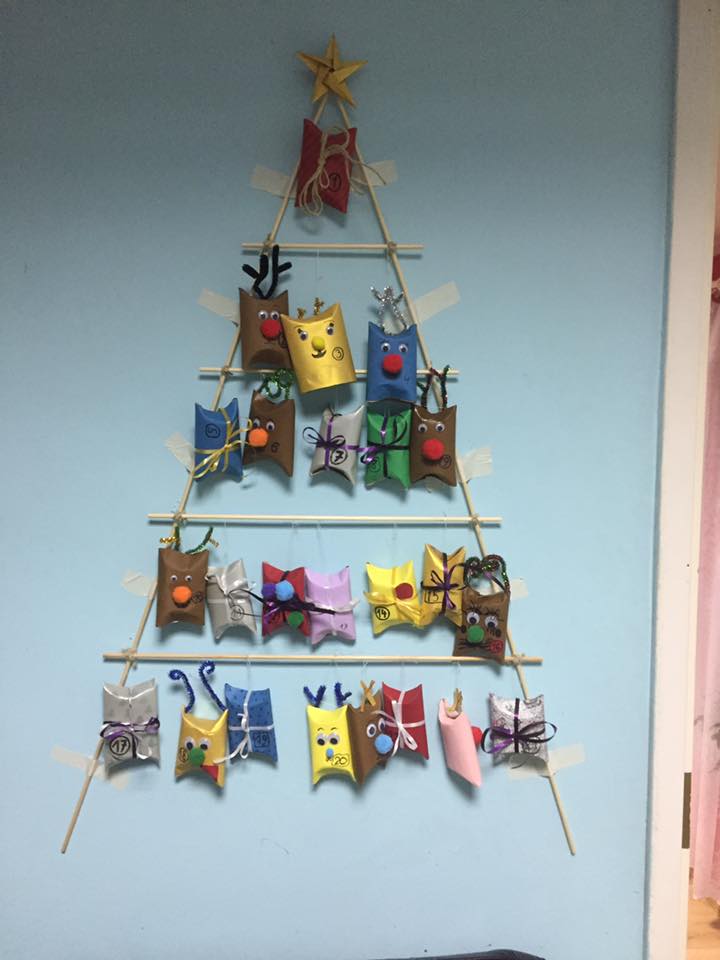 with presents afterwards, so it was fine). One, that wasn’t really a Christmas party but more of an event where they were honoring outstanding people in sport, culture and youth work in Valgamaa (there was a looot of clapping). One, from the school where all the students sang, made plays or said poems and were gifted by Jõuluvana (Santa Claus) afterwards (and after having sung a German Christmas song I also received a nice gift, lots of snacks, socks and typical Estonian blood sausage (didn’t try that one, tho – but my parents liked it)). And finally one, where I was performing a dance with some other women. We had been practising it for weeks now and I’m quite proud to say that I didn’t even make a mistake! :D

Also, with my crafting club kids I made an advent calendar in the end of November and throughout December we were playing a lot of games and challenges in the youth centre with little prices for the winner(s). Unfortunately we didn’t finish all 24 days – but who says that you can’t have an advent calendar in January, too? :D

Another Christmassy thing I did in December was visiting some Christmas markets: The ones in Tallinn (even twice), Riga and Tartu (where we were watching a funny Santa Claus bicycle race and writing a letter to Santa, wishing for world peace... and some chocolate :D). There was a festive atmosphere everywhere you went because of fairy lights, (Estonian) Christmas music and the smell of hot punch/glögi. And even the snow we were missing in the beginning, expected us when I arrived to the Estonian Winter Wonderland after spending a weekend in Riga with my sisters. 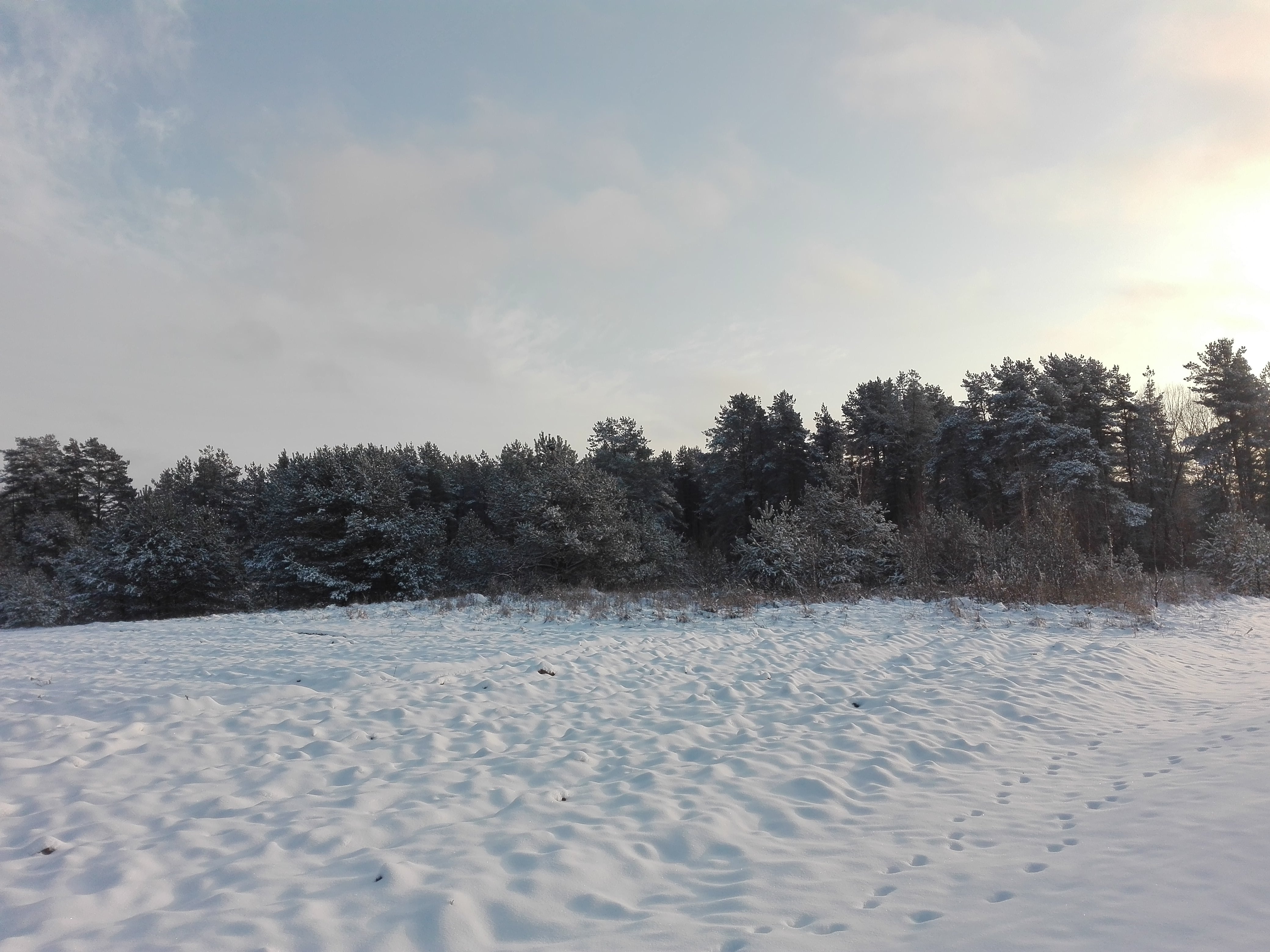 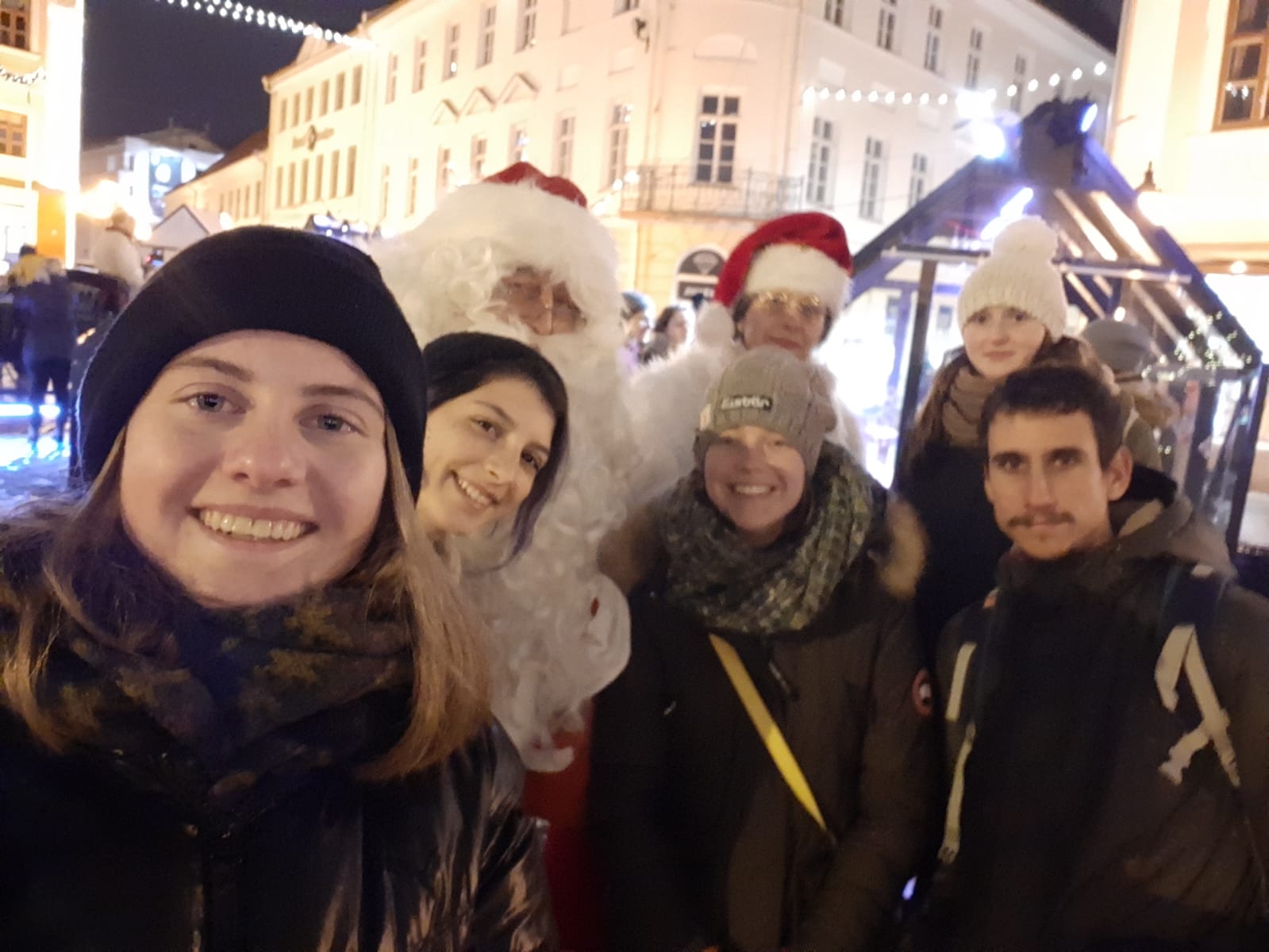 I think I’ve never been looking forward to Christmas as much as this year, I even started listening to Christmas songs in November already! Especially because I knew I would finally see my family and friends again, which already brings me to…

… E as in Enjoying time with my family

In the beginning of the month I was in a bit of a hard phase because there was a lot to do and going on and I didn’t feel very motivated. That’s why I was even more excited when on December 15th I finally met with my sisters in Riga. We spent the weekend there together before driving to mz home in Hargla. I could take some time off and show them around the snowy (and freezing!) Estonia, as we also visited Võru, Pärnu (where we could even walk on the frozen waves of the sea!) and Tallinn. Of course I also showed them the youth centre and they were lucky enough to see my performances at the Christmas parties. The time with them flew by and soon it was already time to head home for Christmas. At home the time passed even faster, trying to see all of my relatives and friends again. So before I even knew what was happening 5 very nice and cozy days were over and my plane to Riga was leaving again. 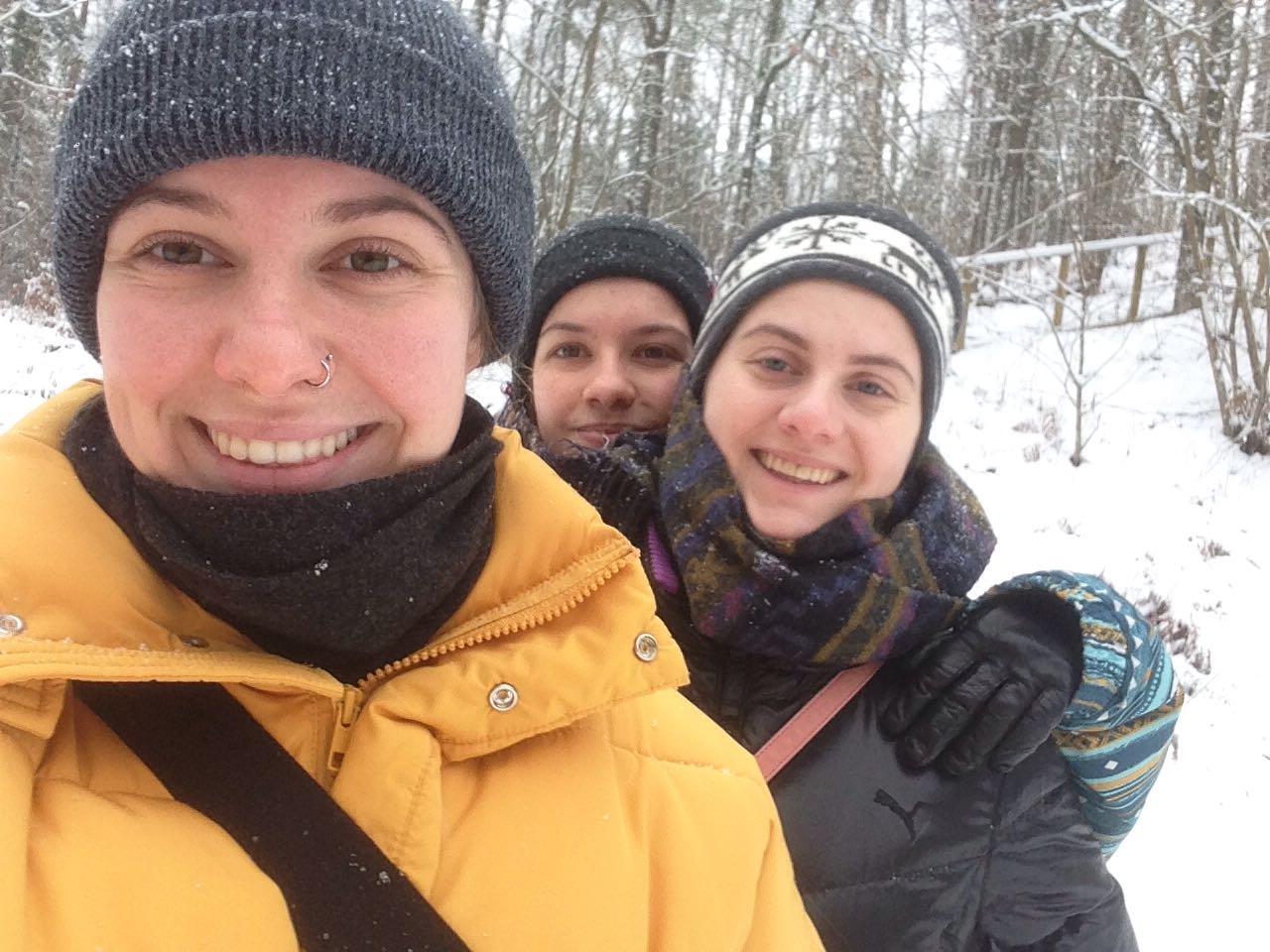 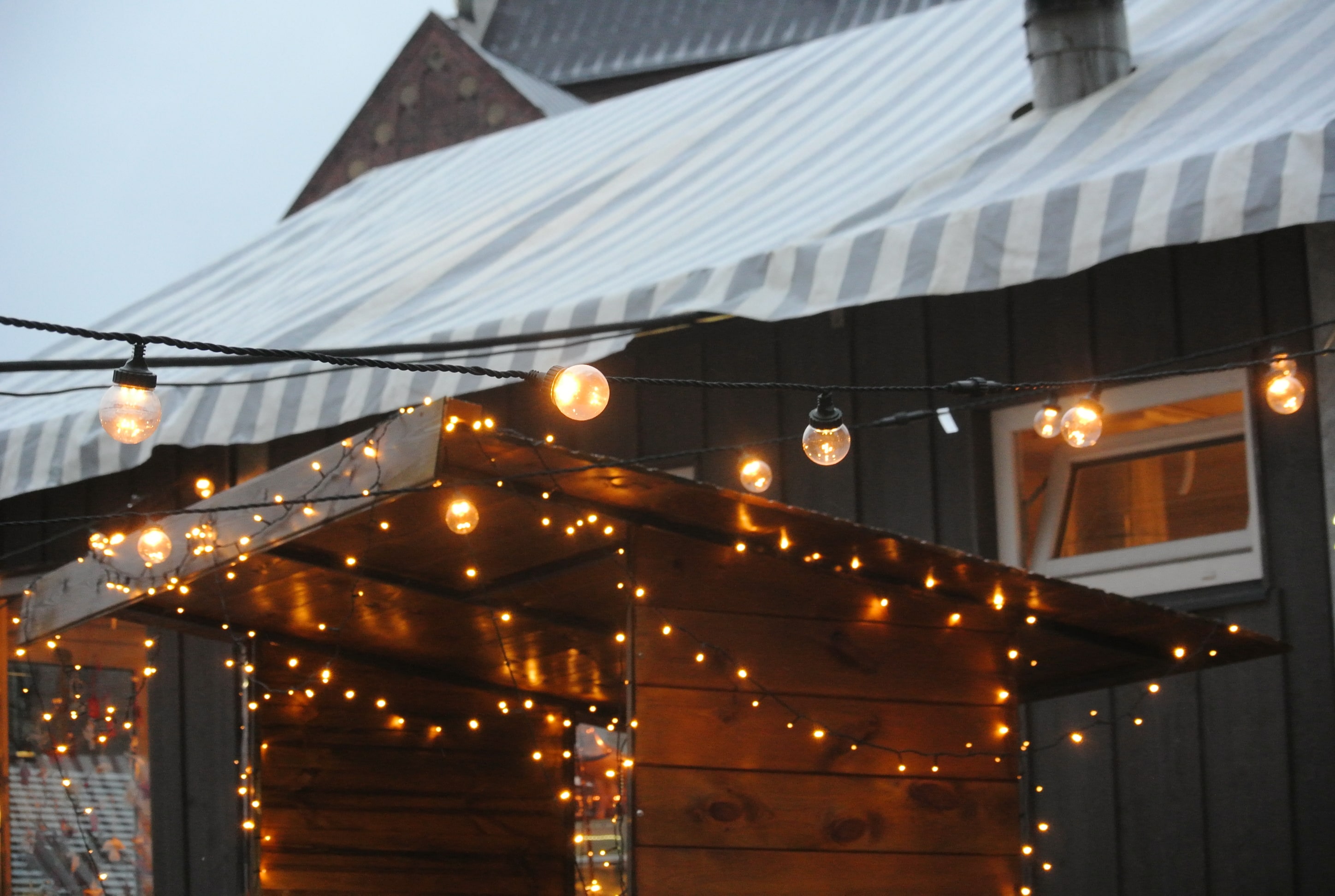 ... M as in Movie night with pizza and pancakes

Now that’s something that I had been really wanting to do for quite some time now. I wanted it so much that it even made it on my 100-things-list! And one Friday evening in the beginning of December Katharina, Gabriel and me met in Tõrva and watched ‘Rudolph’ (and laughed about the bad animation) while eating lots of pancakes (we had made waaay too much of them!) and pizza (only frozen one unfortunately, but we got to eat ‘real’ Italian pizza two days later in Tartu, it was so good!!)

... B as in Board game evenings

I already talked about those in the last blog, but I will gladly mention them again: Every Monday evening in December we played different board games with the youngsters and I was always looking forward to those evenings. I got introduced to some new games, for example I played Scrabble for the first time, which was nice (even though I probably wasn’t too big of a help for my team because we were playing in Estonian :D). But we also stayed true to one of our all-time favourite game – Catan – and regularly had intense fights that sometimes lasted even longer than our club schedule allowed. (and I can proudly say that I didn’t lose most of my battles!)

After having come back from Austria, I spent one day in Riga, and one day travelling back to Hargla. On 31st of December I drove to Tallinn, because me and some other volunteers had planned to spend New Year’s Eve there. It was a long and very fun night! On the main square there were some cool concerts and at midnight a huge crowd was there, listening to the speech of the president, singing the Estonian anthem, doing the countdown for 2019, watching the fireworks and dancing and having a little party there afterwards, even though it was snowing a lot. 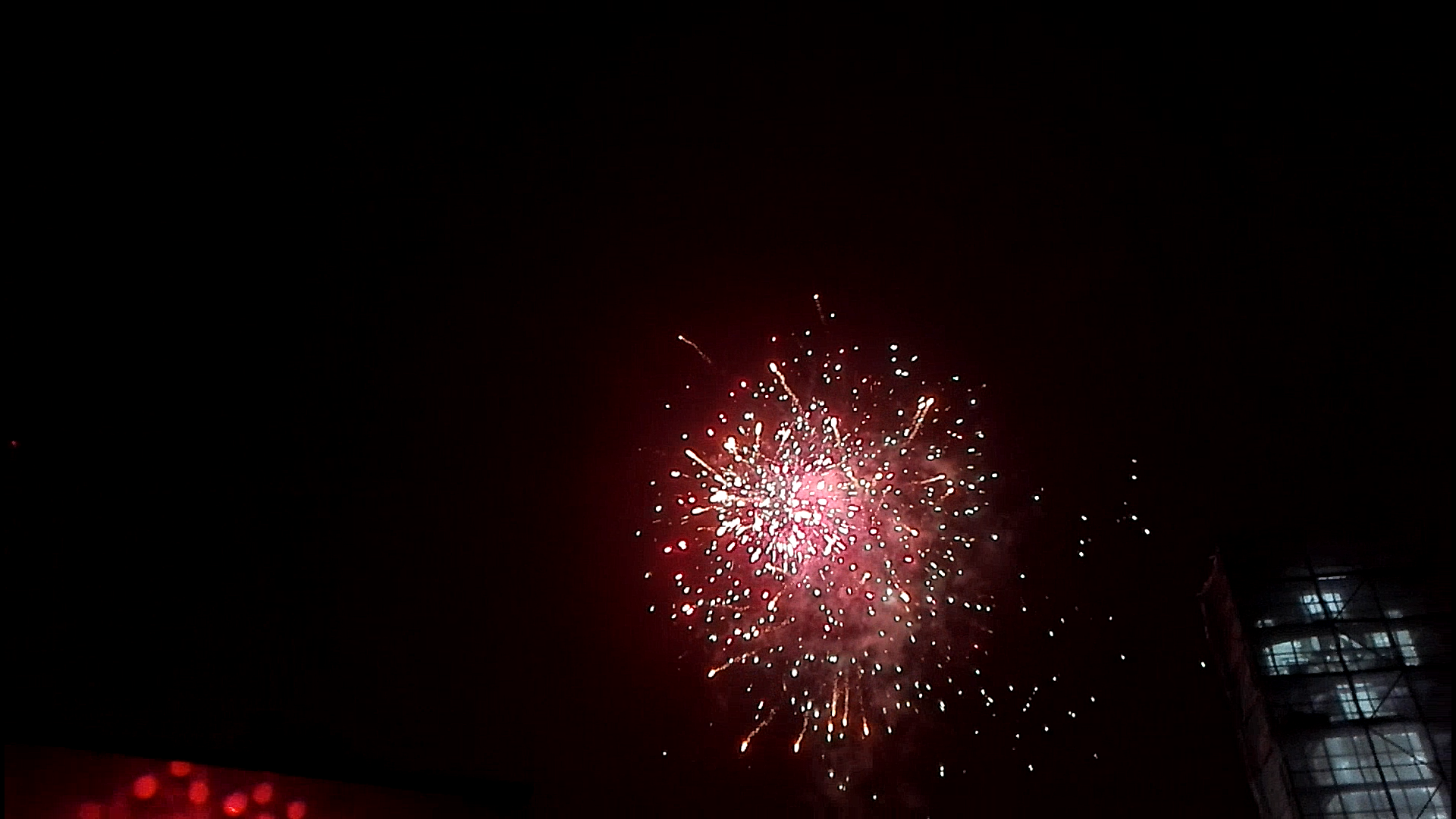 After midnight we went to some bars (including karaoke bars) and when I went back in the morning I was so tired that I actually slept on the bus which I usually can’t really do. But all in all that night in Tallinn was a great way to start in 2019 and I’m excited to see what this new year and the rest of this EVS will hold for me.

So, even tho there was so much going on in December, I still found the time to think a bit about what I want to do in 2019. And one of my main resolutions is to improve my Estonian. Because of course I can already understand quite a bit and it gets better the longer I am staying here, but the process of learning is slow and I’m not even half as good as I would like to be already. So I started my new year right with some language learning on 1st of January (after I’ve finally came home from Tallinn, which was a bit of an adventure, because I thought there were no more busses going from Valga to Hargla until the evening) and here’s my vocab of the week: 'Mul on igav', translating to 'I am bored'; and 'Mul on ükskõik', meaning 'I don't care'.

And I also already have some ideas for events, activities and projects for the youth centre and my crafting club, which you will probably hear more about in the next blogs. Hopefully it will be possible to do all of them (or at least most of them) – after all my time here is limited and I’m slowly starting to realise that the end of my EVS isn’t actually so far anymore...