So after my boyfriend left, I focused mostly on our “Tankla meeting”. We planned to do some board games, a hike and sushi. As the cook-profs Tania and I are, we thought Sushi is a good idea, even though neither Tania or I made it before. :D – well, as we are very experienced sushi makers, we knew exactly what to do and how the rice has to be prepared. So I had the luck, to cook the rice the day before, what was combined with absolutely no pressure because (in Üllas words) “the rice is the most important”. Luckily everything turned out well, as the rice was not super sticky, but still sticky. :DD The next day the event finally took place and I was really nervous before – will everything work as planned? Will the people like it? Why are we doing Sushi, I have no idea about that :D
Luckily everything worked really well. In the beginning we played games and the atmosphere was really chill and fun. Also we managed to do sushi (with Üllas help, as she is a professional and taught the group how to do it) and it was DELICIOUS :D – to get rid again of the cookies we ate, we made a hike to the megaphones, as our event took place in Pähni. The hike itself was really cool and at the megaphones we made a small photoshoot including a snowball fight. :D
After coming back to the hut, where our stuff was, the event was already over and everybody drove home, with good sushi in their stomach and hopefully a good memory in their mind. :D

The weekend after the event also was really fun, as I drove to Sabrina, a volunteer in Abja-Paluoja. We talked a lot, cooked and went for a walk. In the evening a party took place, where a “famous” rapper was about to come. We had a great time there and luckily the rapper just “sang” for half an hour (we did not really liked his music, as you can guess maybe :D). After a nice weekend, Sabrina came with me back to Hargla, as she had to be in Valga on the next morning. :D

Also the week after this “great” concert (the party itself was really fun :D just the rapper was a bit weird) also in the youth center a cool event took place – the “Table-Tennis-Turnament”. In the group of the girls I even made the 3rd place. :D (if you don’t mention, that with me only three girls played, I think it is pretty impressing :D)

The weekend after my great success I also experienced something new. Together with Rasmus, some youngsters and Antonia, the volunteer in Võru, I went ICEFISHING :D For that we drove to the biggest lake in Estonia, which is also the border lake to Russia, called Peipsi. When we arrived, we put on our ski-trousers and then the walk on the ice started. I felt like a penguin and a sumo-wringer at the same time, as I just made reeeally small steps and wore so much that I felt twice my size. :D
After some walking time we finally stopped and drilled the holes and the fishing started. :D as the wind blew quite much, it was really cold and as we were sitting on the ice we even became “one” with the ice, as the trousers got frozen to the ice. :D
But because the spot was not the best, we decided to go further and to try our luck at another place. – I did not have luck in terms of fishing, but otherwise I had, as I never fell while walking on the lake. After some time, we decided to change the lake as well, as it was so windy and thanks to that freezing cold. So we drove to a smaller lake, where Antonia and I made a little hike. It was really nice, as the sun was out and the wind was not that strong – but while the hike the luck was not as much with me as during the “ice-walk”, because just when we said, how happy we are, that we never fell, I sat on the ground. :D (yes, this in the right picture is me :D)

After this long day outside I was quite happy, to be back in Hargla, where I ate something and then went to bed, to be fit for the upcoming week. 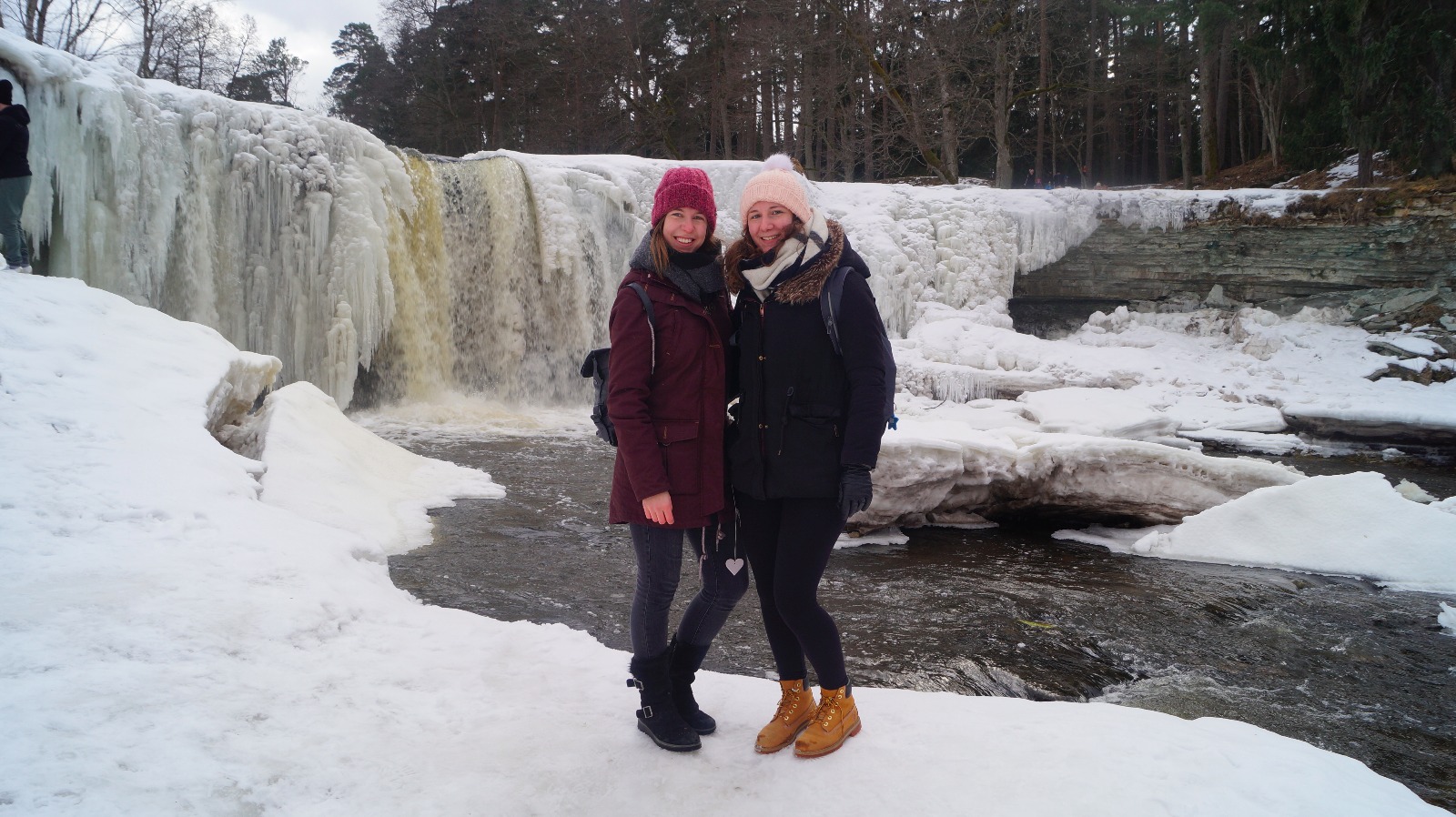 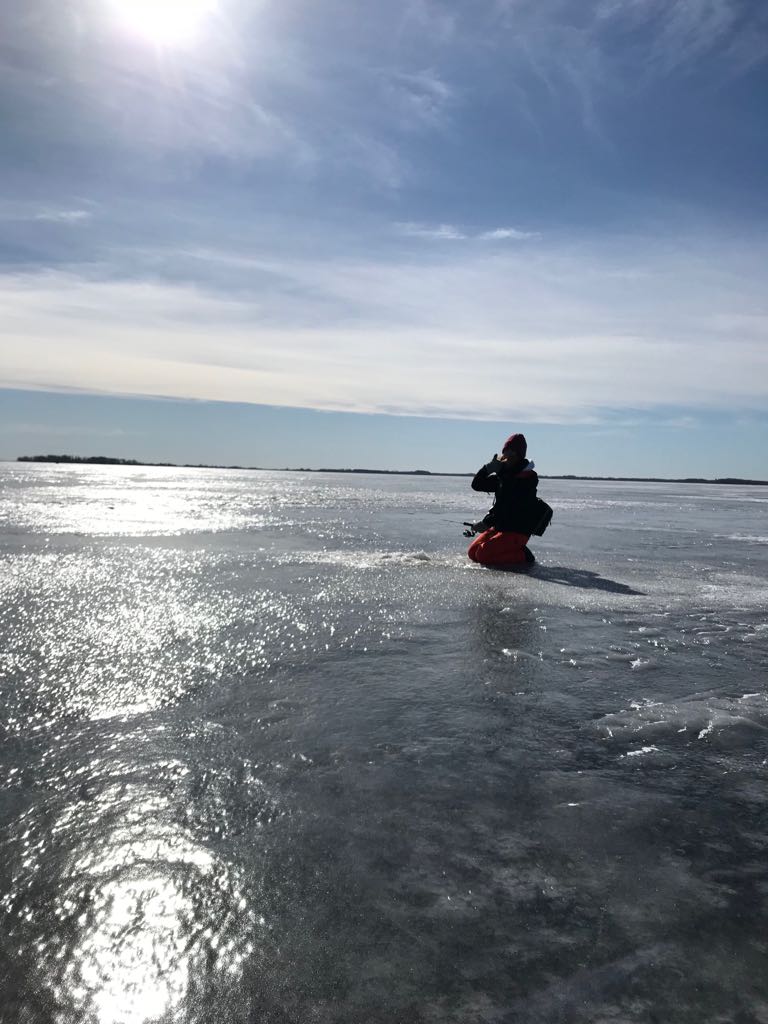 Because the sun was finally out, Antonia and I decided the next weekend to go to Keila, as we wanted to see the waterfalls there when they are frozen. So together we went to Tallinn and then to the waterfalls. They still where frozen and looked amazing, so it turned out to be also a small photo shooting, which was sometimes quite adventurous, as it was so slippery and “hilly” (not the best combination :D). So we more or less slided around, but nonetheless we managed to make some nice pictures.

After those adventures another one took place, called “4 people living in a place where normally 1 lives” – you wonder why? – well, because my grandmother, my mum and my dad came to visit me over the (Austrian) Easter holidays.
It was very nice and together with them I discovered some new places, as they rented a car, so it is much easier to visit some places.
Now I can proudly say, that I have been on the highest point of the Baltic States, as we visited the highest mountain, called “Suur Munamägi” (big egghill). It was very impressing and I have never been that fast on a mountain then this time. Adventurous five minutes and a stunning view on those 318 meters. :D (actually we really had a nice view, because we were able to went also on the viewing tour, which was closed actually. But when we came the guy who worked there was there as well and let us in :D)
After that we drove to some places, I already visited (Võru, Tartu) and then back to Hargla. In the next days we generally drove more to places, which are near but nonetheless nice. :D

But on Friday drove to “Lahemaa Nationalpark”, in which I have not been before. There we drove mostly to those famous grange, which are really nice looking. :D After looking to some of them we decided to drive to the coast, where an old fishing-village is located and also a place with big stones in the water. It looked very cool and in one point you could even go from the coast to an island. :D
As the national park is near to Tallinn we decided then to drive there. On the way to the capital city we made on stop more, in Jägala, where also frozen waterfalls were. They are also really impressing and looked stunning. 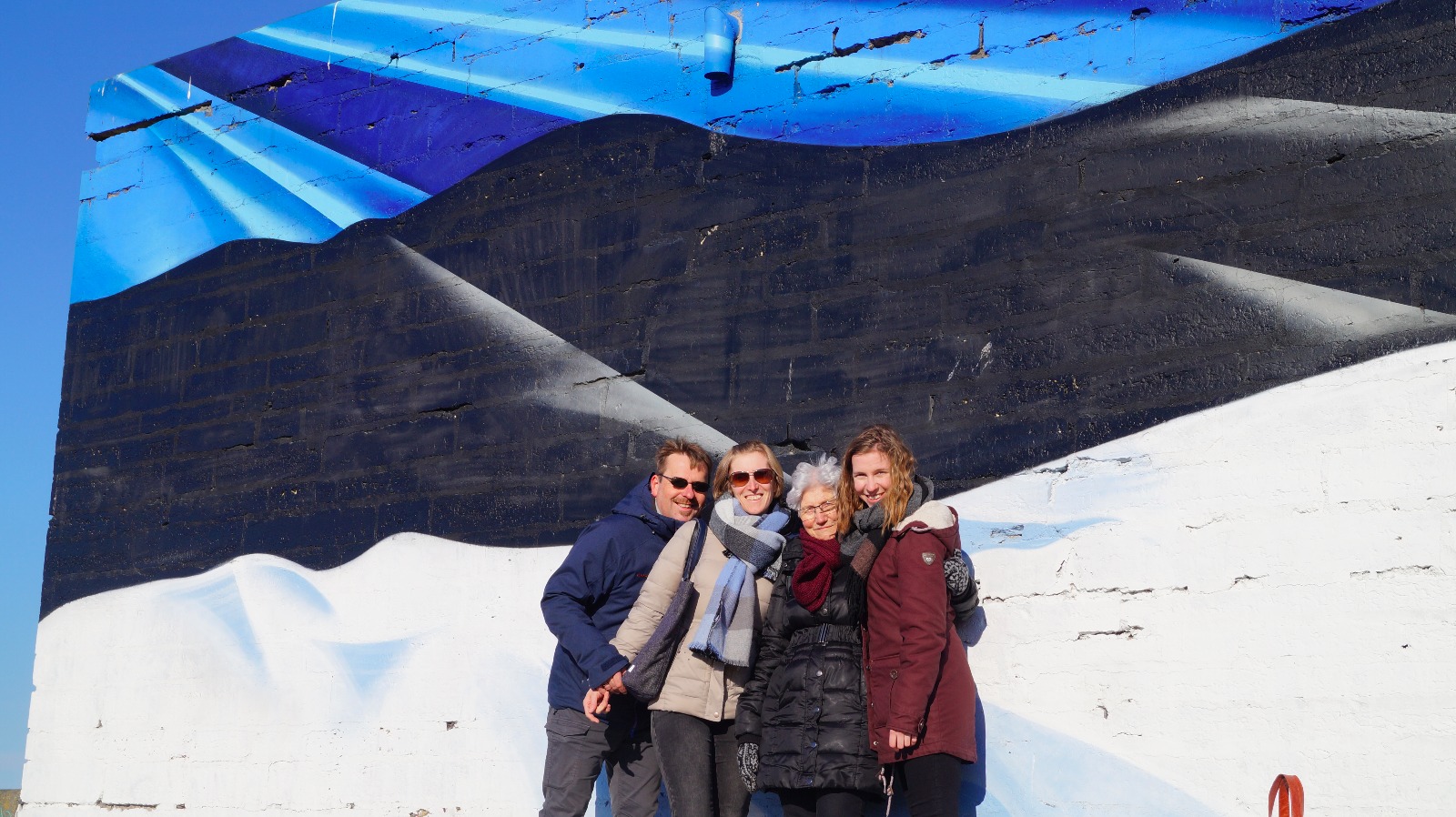 So the last days with my family I spent in Tallinn, where I tried to show them around and explain, what I already know about some of the old buildings. We had a really nice time there, with nice weather, good food and funny conversations, and I hope, they enjoyed also. :D

And then – April was/is already here! Always fascinating how time flies. On the one hand great, because it shows me, that I did not get bored and travelled,… and on the other hand scary, because I still have many planes for my time in Estonia. :D So I really enjoyed March and what it held for me, for example also something that I did not mentioned before, like“crashing” a car and when you are headlong getting out of the car (it was so much fun) – so lets see what’s going happen in April – hopefully spring comes and I can change my winter coat to a thinner jacket. :D