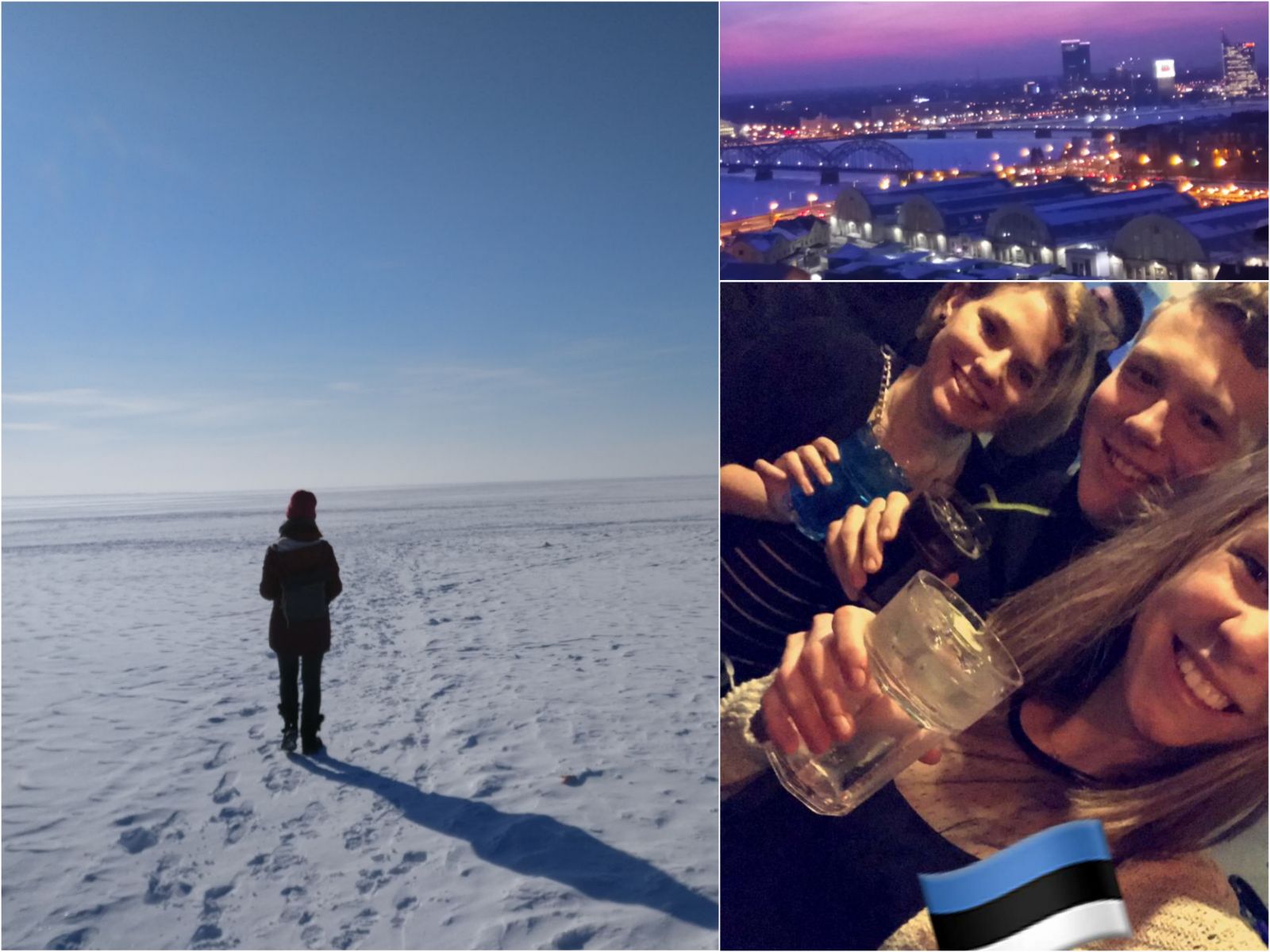 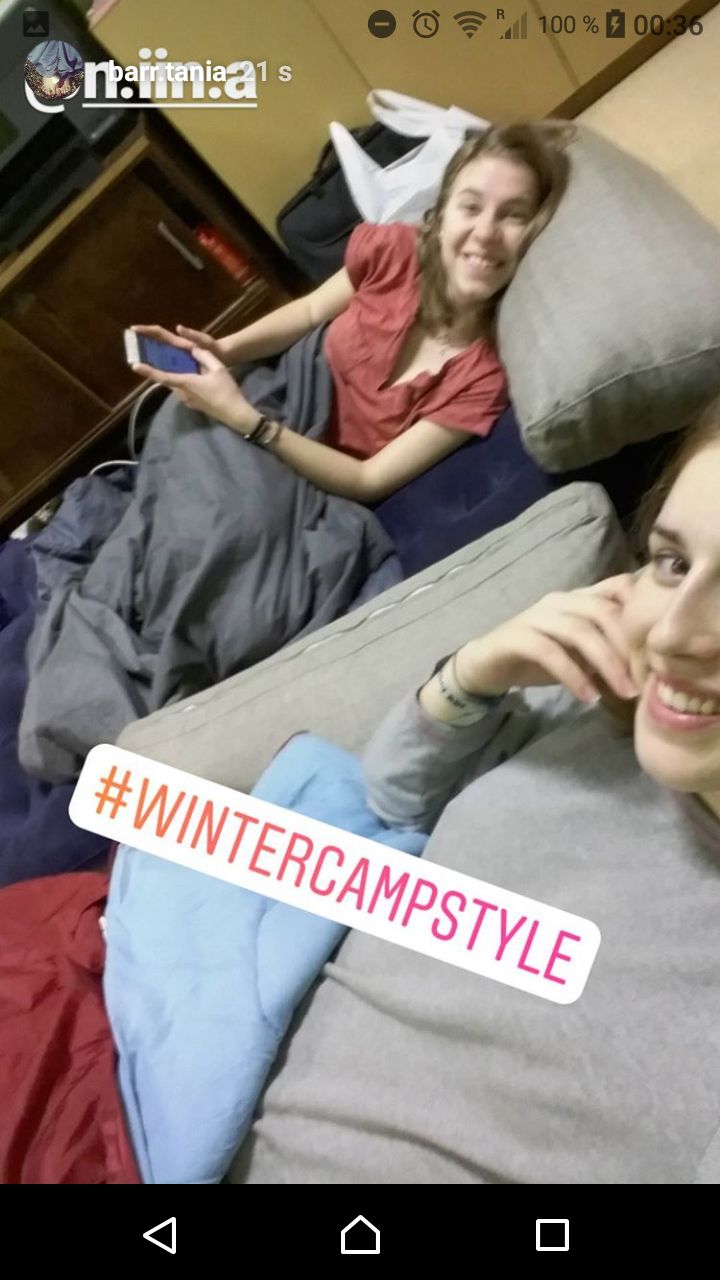 February started with the wintercamp of the Defence League, where Tania and I helped. It started on the 2nd of February with building the groups and activities, like a Parkour.

Luckily I had a nice mattress so I could sleep quite good. (not the best sleep of my life, but for sleeping on the floor not too bad :D) On the next day we were woken up by child music and then the day started with breakfast.

The 3rd was quite an exhausting day for Tania and me, as we did a workshop at the camp. We did some bird food and thought them, how you can use foil in the nature (for example except for an battery,…)
During the first workshop we did not really had a time management, but it got better and better and so the last workshop was really cool. (even though, we had the same jokes as during the other workshops and laughed as if we never heard them before)
And now I will always know, how to make proper bird food! :D

Even though it was quite exhausting it was also fun and in the evening we danced with the kids at the disco and had some late-night-snacks (cereals, sooo good *.*)
And on the 3rd the wintercamp was over again :D what does not mean, that after it was nothing to do – more the opposite.

Because in the week after the camp, my club went to Lüllemäe to do ceramics. It was really cool, as we did a cup and those who wanted could also try this spinning thing. :D

Also a big “class-event” took place in the Youth Center, where classes of 3 schools came. (one was Hargla, what a surprise :DD) The 4 groups, with kids from different classes and schools, had to make points during competitions. It was quite fun to watch and I think also the kids had a lot of fun. :D 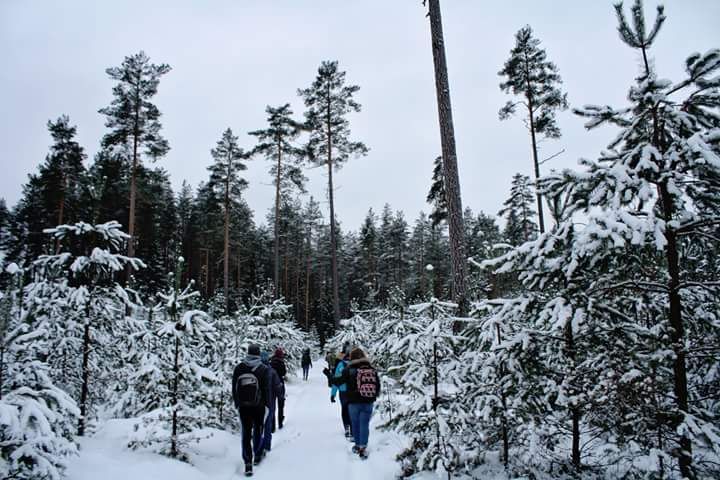 During EVS everyone has also a “Mid-Term-Training” and, as you can guess, because of the name, it is supposed to be more or less in the middle of your EVS. So mine was from the 9th to the 12th of February. It was in a hut (in the middle of nowhere, so for the Tallinn people quite unusual :D), where we had sauna and a nice Jacuzzi.

I really enjoyed my training, as I was there with some volunteers I already know quite good and also some, I have never met before. :D We talked a lot about, what we already did and also what we still want to do. One of the topics was also “after EVS”, what made me realize, that “the end” (sounds a bit creepy) comes so fast and time really flies.

Also I got some new ideas and was also reaffirmed with ideas I already had. :D

After coming back from the Mid-Term I was quite tired, but after a good sleep I was fit again for the upcoming week, where also a lot of things happened. :D

Because Rasmus was at a training the Youth Center was closed and I helped for the first time in the kinder garden. It was really nice and the kids were (probably still are) so cute. :D 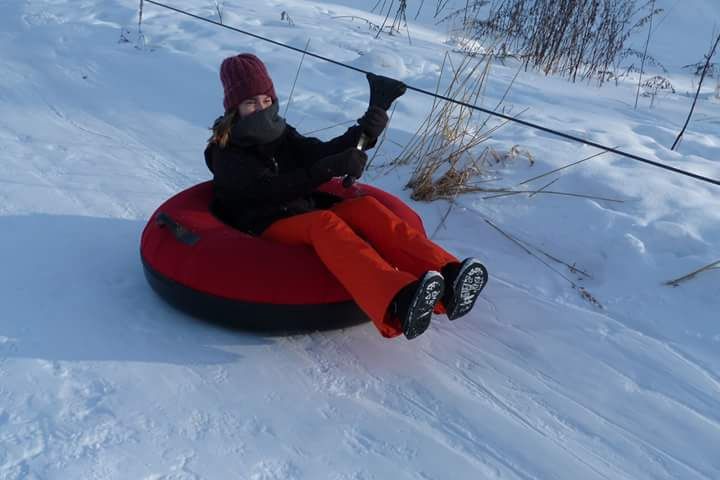 In Estonia there is also the tradition on the 14th of February, that you slide down a hill – and so, after having lunch the (more or less) whole school drove to a hill (for Estonia it was actually a mountain), where we had the possibility to slide down with some “rings”, what we did for almost 2 hours. It was so much fun, the weather was nice and everyone was in a good mood. :D

The next day I also helped in the kinder garden and in the afternoon I had my club.

Because of Valentinsday we also made a movie night in the Youth Center, where I got surprised by the kids with cake, as my birthday was the next day. It was really tasty (thanks to Piia, who made the cake :D – in the same room, as my club took place that day, and I did not even noticed :D)

So on the 16th we (so Tania and I) had again Reflection-day :D This time we were again in Ritsu and I don’t know why, but the day was over so fast. During all the talking, getting birthday wishes from Austria, the time flied and in the evening a friend from Tallinn already came to Hargla. (we picked her up from the busstation in Valga) We had a nice evening, talked a lot and listend to music. (thanks to Autoplay we somehow ended up in the depths of Youtube, like a piano tutorial for Wrecking Ball)

And on the 17th something happened in Hargla, what never (probably) happened before – a lot of young people were driving with the bus from Valga to Hargla on purpose. :D 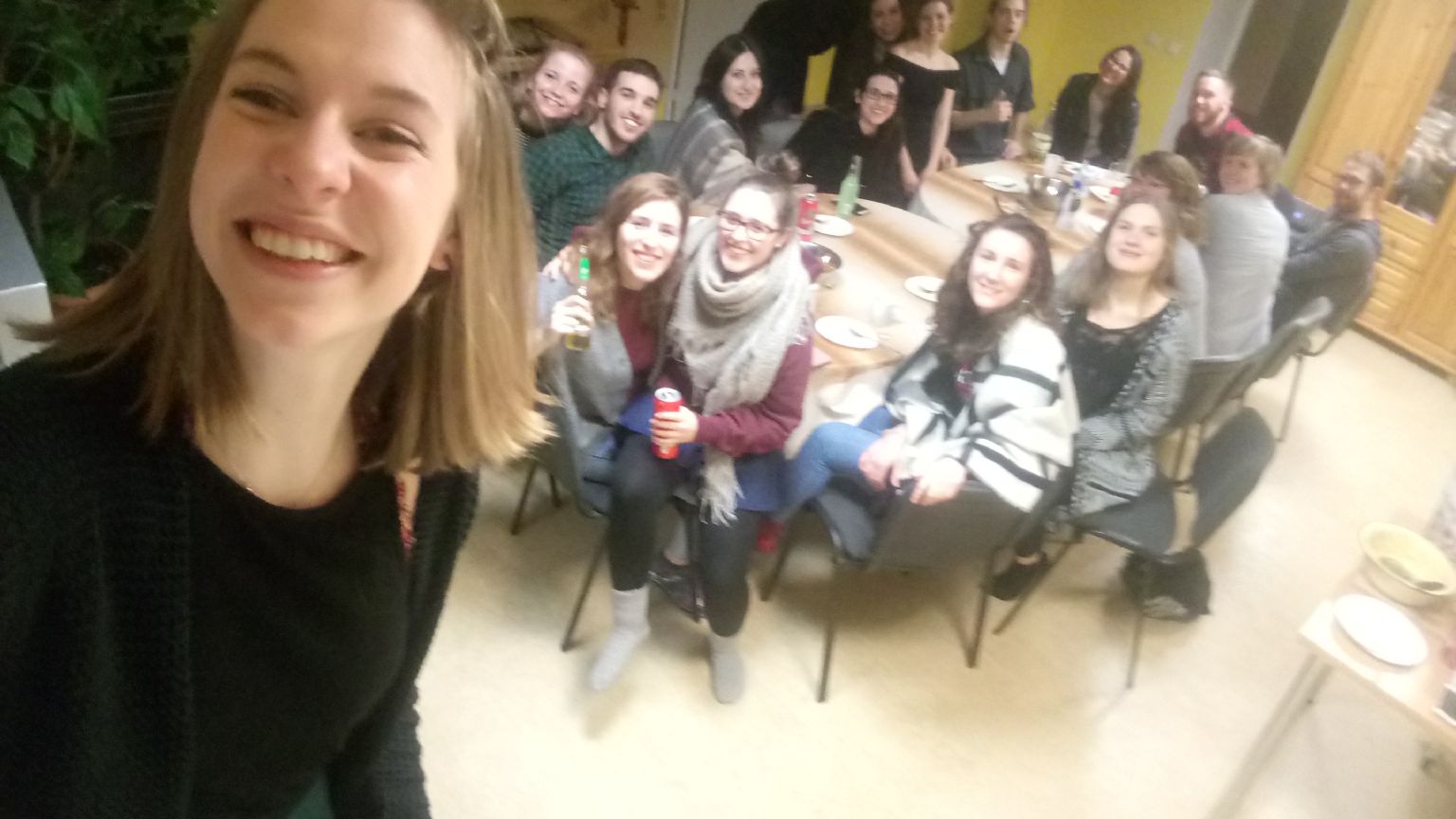 You ask yourself why? – well, because Jana and I celebrated our birthday in the Youth Center in Hargla. Even though the Tallinn people were shocked, that so much nature even exist everyone managed to come here. :D The party itself was also really cool and I really enjoyed to have all those people around me. :D After eating “Spätzle” and some Pasta the party really started and I think (and hope) everyone had a good time.

On the next day everyone helped cleaning and  the bus driver had again a shock, when 13 volunteers were waiting at the bus station. :D

But next to my birthday another big birthday took place – Estonia got 100 years old!! So on the 23rdwe celebrated this birthday with a concert in the Youth Center, where I was playing with the violin. But next to playing the violin I also had the pleasure to dance with some kids to the music, which was playing after the concert. :D After the concert and food Rasmus drove me to Valga (thanks for that :D), because on the next day I was going to Riga, to pick up my boyfriend Markus, who came to visit me for a week. So from the 24th until the 4th (of March) I took days off to spend them all with my boyfriend.

Even though it was quite cold, we had a lot of luck with the weather, as it was mostly sunny. (aaahh, sun - so good to see it again :D)
The first days of the week we spent in Tallinn, where we went together with other volunteers to a bar, joined the Tallinn Free Walking Tour and also did an "Exit the room" (got it as a birthday present from my parents – I can really recommend doing it :D – we even managed to exit within the last seconds :D). 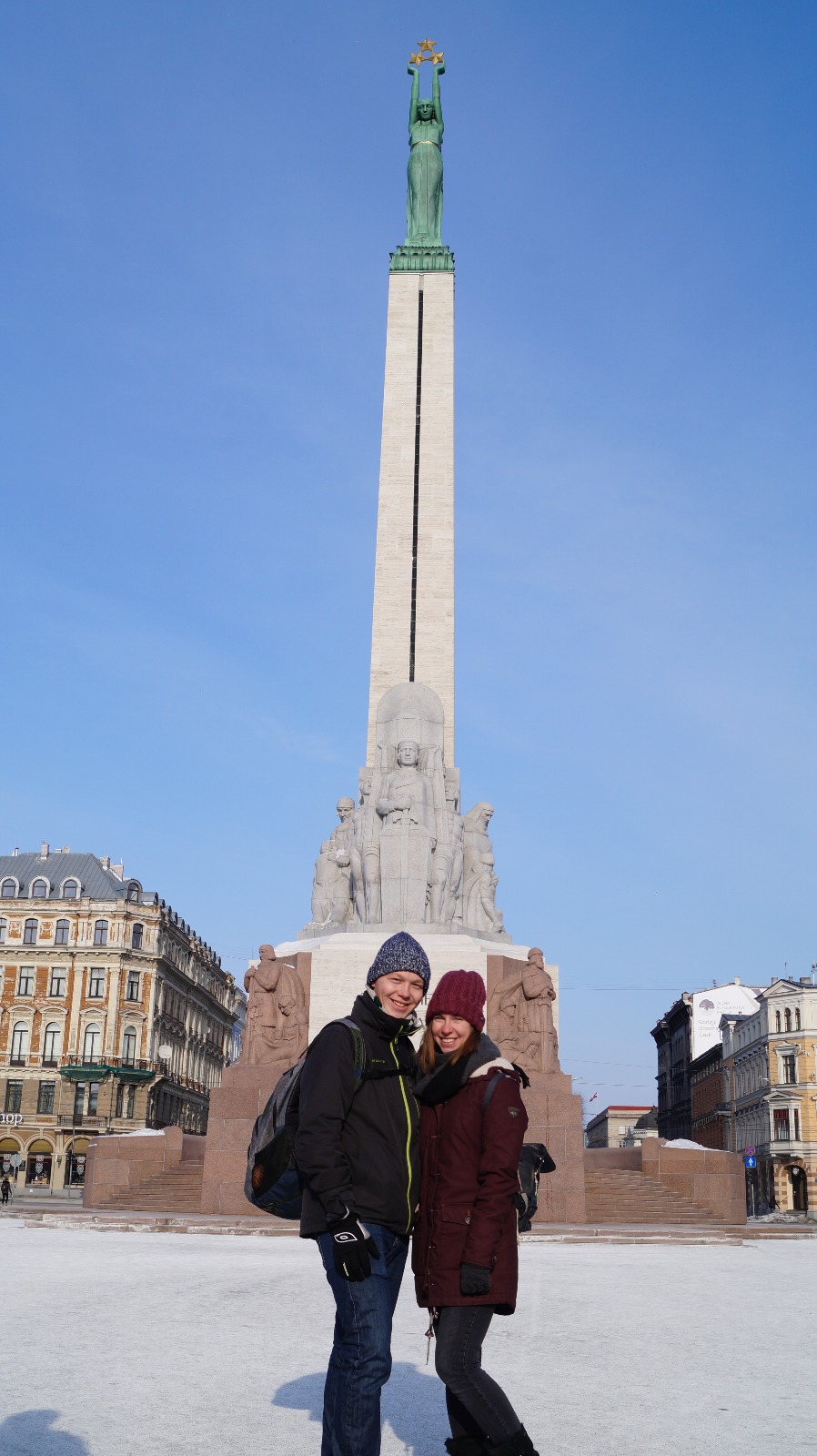 After nice days in Tallinn we drove to Pärnu, because I got (also for my birthday) a coupon for the Viiking-Spa. :D It was so nice there, because the Spa was really beautiful and it was really good to spend a day in warm water/hot sauna, after we were almost frozen in Tallinn (thanks to the wind and quite cold temperature). And in Pärnu we also turned into Jesus, as we could walk on the sea (okay, it was frozen, so maybe that was the main reason :D). It was a really nice experience, as we could not really tell, if we were already on the sea or still on the beach, as it was all covered in snow. :D

After having a walk through the city we went to the bus, where they told us, that the bus directly to Valga is not driving today (YEY, great :D). Luckily we had other options to come to Valga, even though it was not the best solution, as my boyfriend had a big suitcase and with that it is not so easy to change busses. :D
Nontheless we made it to Valga and then to Hargla. The next day we had a walk in Hargla and it was really nice to show him everything, because now he finally has a picture in mind, when I am talking about things here. :D
In the evening we went back to Valga, because on the next day we were driving to Riga.
Also in Valga we walked a bit around (to Valka,…) and then to Tamara’s flat, where we stayed for the night.

On the next we drove to Riga, where we, after bringing our luggage to the Hostel (which was not the nicest, but okay, it was really really cheap and McDonalds was directly under it :D), joined also the Free Walking Tour. Because we were quite cold after we went to a Café and made a plan what we will do the next days. :D

So after walking a bit through the city we went to a “Panorama-platform” when the sun went down. It was such a nice view :D every minute it got a bit darker and the lights of the city brighter. :D

The next day we went to the island “Kipsala”, where we went for a walk and went inside the national library. Later we went back to “the main” city and looked at some more tourist attractions :D

On Sunday it was the day to say goodbye again :O – before driving to the airport we enjoyed the sun again, sat in a café – just had a relaxing “last” day. And then we had to say goodbye and he flew back to Austria and I drove back to Valga.

Saying goodbye is always a bit hard, but this time it was “the last time” to say it, because the next time we will see each other in real life will be in August, so after I “finished” my EVS. :D

(If you have any questions or smt else, just write me or Tania: Facebook: Nina Leimlehner, Instagram: estoni.n.a)