EVS blog: “April, where is all the time?” – about my fast-passed month in Hargla
Prindi

Together with an other volunteer, called Antonia, I went there. It was so weird to know, that on the other side is Russia. :D A volunteer from our Mid-term showed us around and in the evening we met the other volunteers from Narva. Even though we had to drive really long it was worth it, as the city was nicer than expected. – well, my expectations were super low, as in the Mid-term the ones from Narva told us, that the city is not beautiful and actually not worth a visit. But the volunteers told us, that the weekend we are here is not representing Narva as it normally is, as it was sunny that weekend.(normally the weather is not that nice. :D – well, but when angels are travelling the weather just has to be good :D)
(in the picture on the left side is Estonia and on the right is Russia :D)

After the trip to the Russian boarder the brain game final took place in the youth center and a lot of people came (even though the weather was nice – I didn´t even needed a jacket while going outside :D). 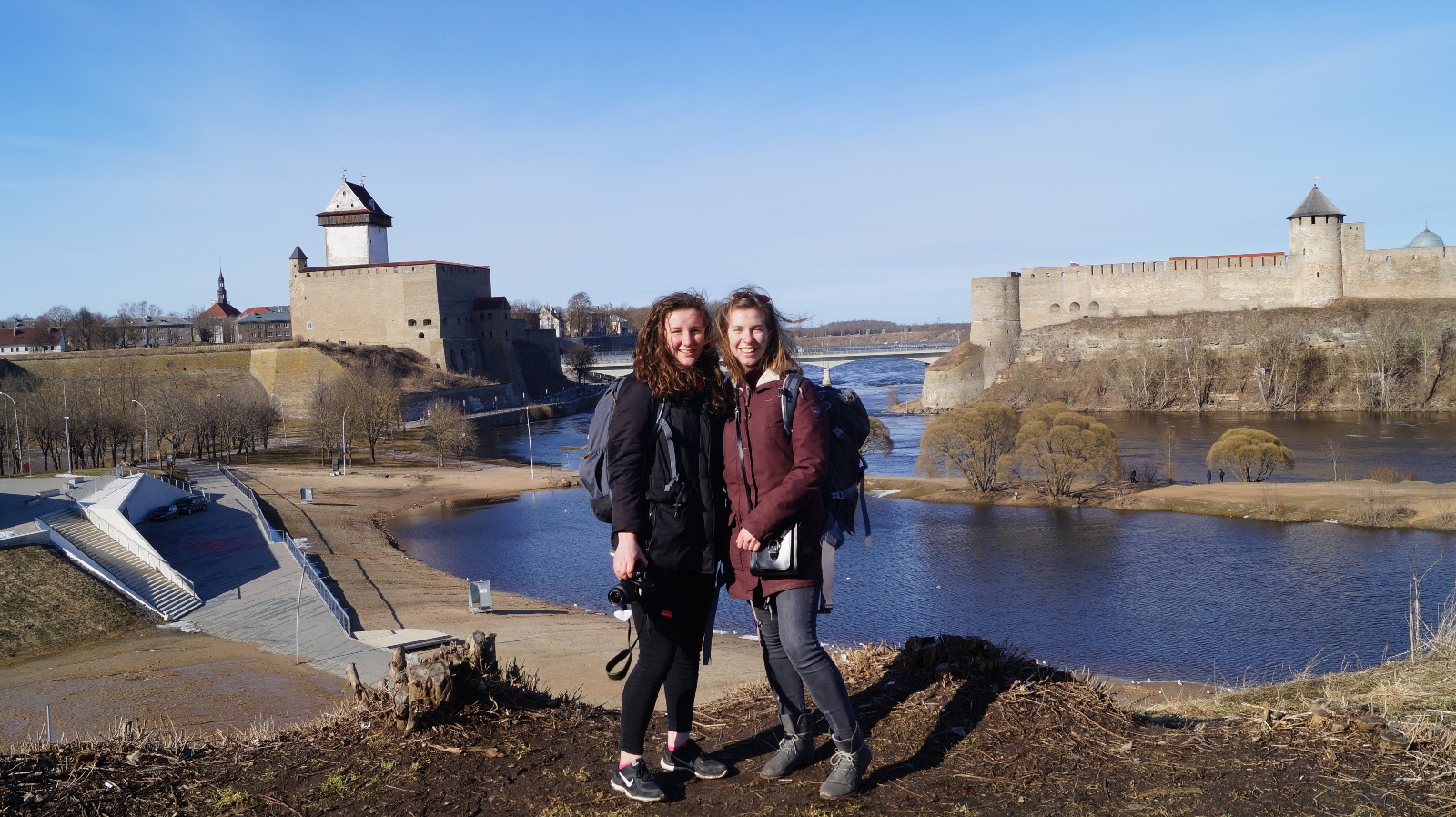 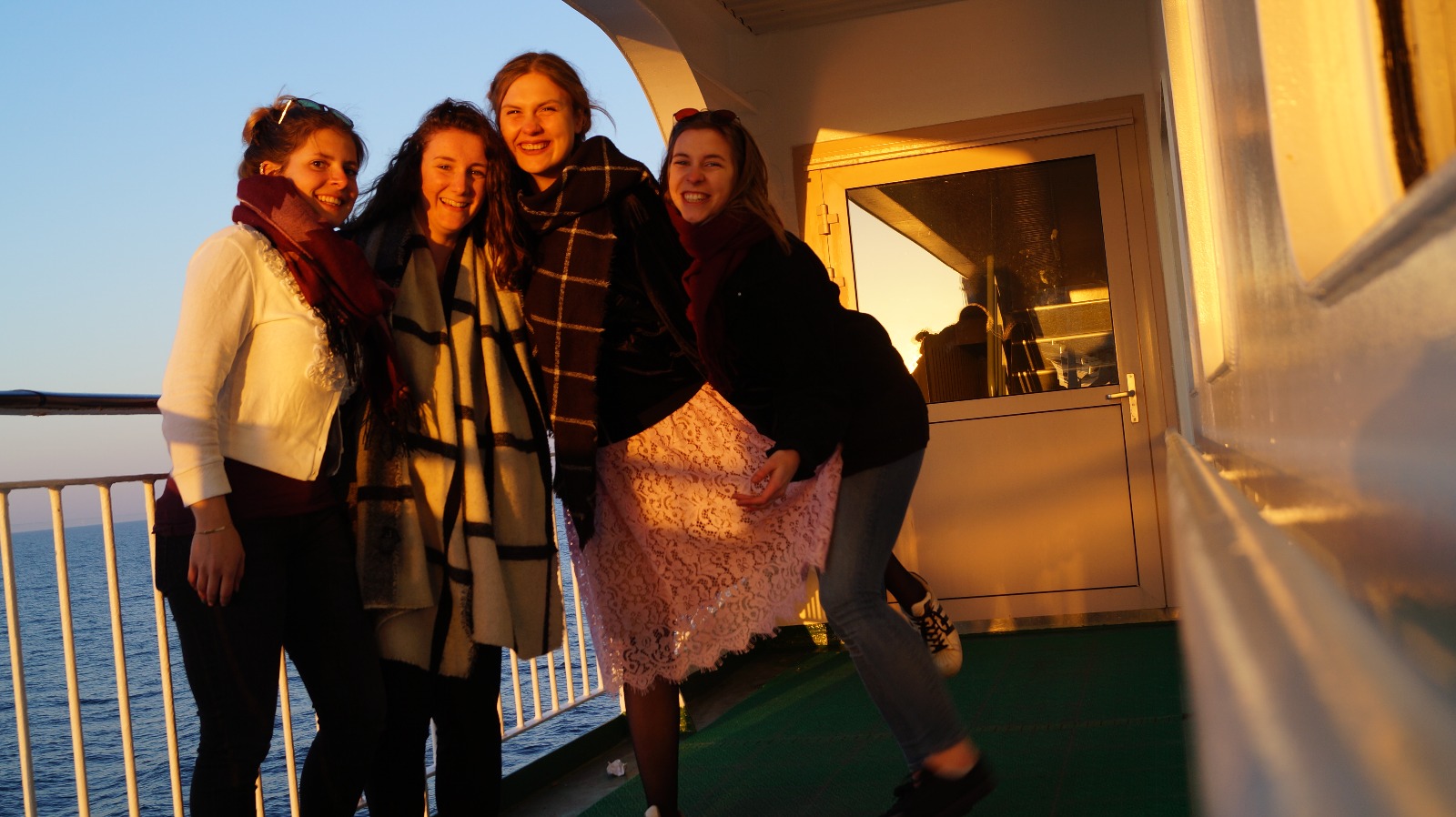 All the week it was sunny and so I really hoped, that for my travel to Stockholm it will be the same. So on Saturday morning Carla (volunteer in Võru) and I took the bus from Võru to Tallinn, where we later met Antonia and a friend of her. Before going on the ship we decided to buy a lot of food, as on the ship there was nothing to eat (only an overpriced buffet) and in Stockholm food is quite expensive. So after buying a lot (like really a lot :D we even had troubles to carry everything properly, but at least we were not hungry :D) we went to the cruise, which took us to Stockholm.
Our room was better than expected and we had a lot of fun. After eating we decided to walk around (including a photoshoot to have a “wow-picture” :D) and later went to a show/disco, which took place in a part of the ship.
After some hours of sleep we finally arrived in Stockholm. With a Chinese tourist-map we tried to figure out, where all the sights were/are. Even though we couldn´t find everything straight away we managed to see everything we wanted. :D Unfortunately we just had 7 hours to walk around the city, because then the ship was about to go back to Tallinn. Nonetheless I really enjoyed it, as the city is very beautiful. :D

After coming back, I was quite tired (because even though the beds on the ship were better than expected, it still was not the best sleep I have ever had) so I was really happy when I saw my bed. In the following week also in the youth center some cool things took place. For example, the “running event”, where I had a very important role – to stop the cars, if runners are coming and to point the runners in the right direction. As you can guess I had a lot of work to do. ;D

On the weekend I decided to stay in Hargla, as the last one was quite exhausting. So on Saturday I went with some youngsters and Rasmus for a hike in the forest and later played a game. The game is a bit hard to explain, but it was very cool (Rasmus and I were a team, but I was not that much of a help, as we had to answer questions about Estonia and well, I am not so good with that :D). After that Carla came to visit me. We had a really nice day with a lot of food. :D
On the next day we went together to the “Village Clean-up”, where we had to rake up leaves. :D Even though it does not sound so funny, we had our fun and even managed to take some pictures (just for the blog, of course :D). 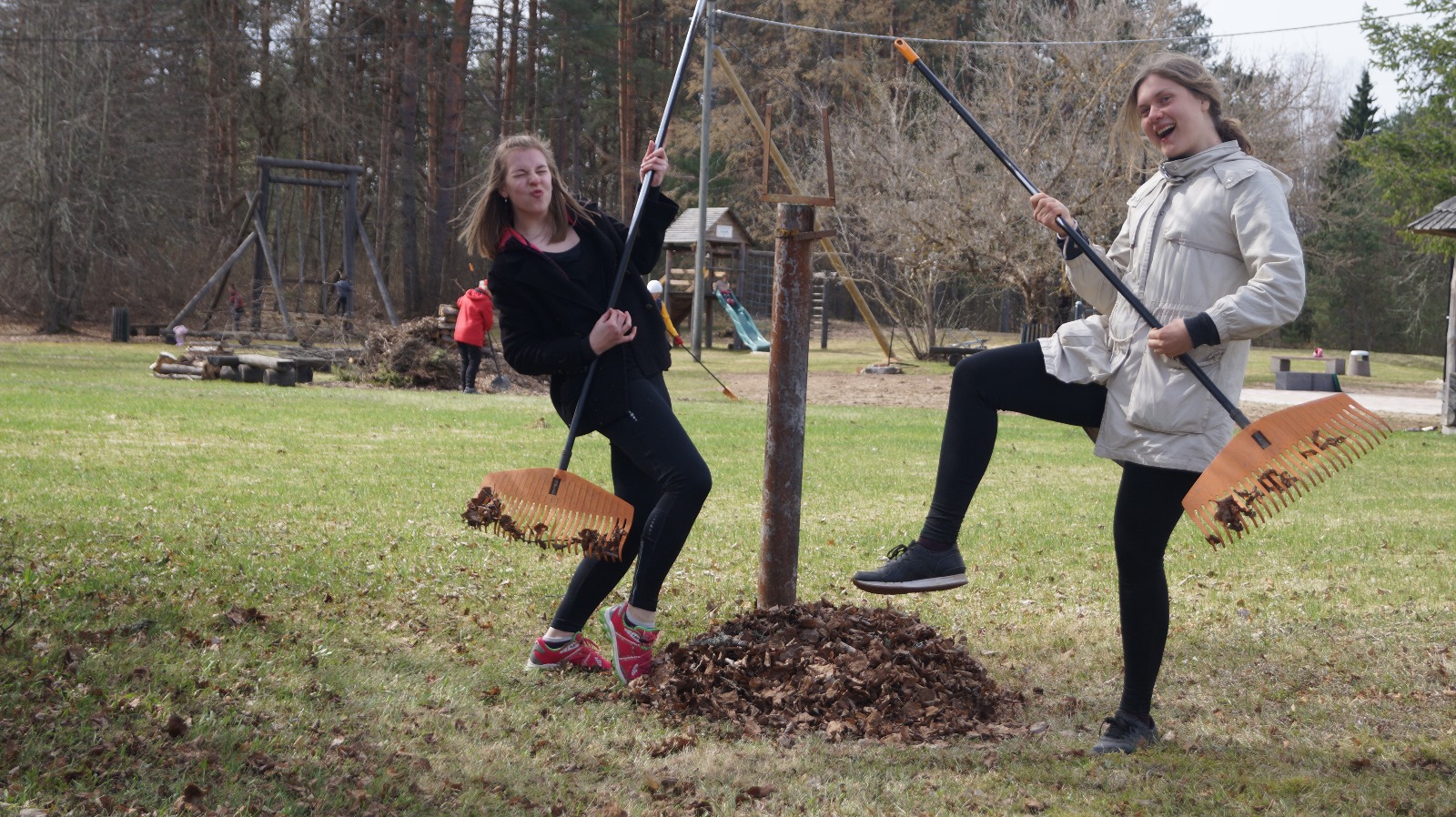 So I had a very chill start in the next week – that week, where I had my handicraft-club for the last time. Because it was the last time I brought some sweets and we went outside to paint some pots, which we put later “over each other” :D It was very nice, but I think I will miss the weekly club. Sometimes it was quite exhausting, but nonetheless I always enjoyed it and liked to create something with the youngsters.

My last April-weekend began also really nice, as I had visit from 3 other volunteers (Carla, Antonia, Esther), which who I went to the dance-eve in Hargla. As I got told, that everybody is bringing food and drinks for themselves we decided to cook for us. After getting ready we went, as if we want to move to the youth center, as we had a biiiiiig bowl of noodle-salad, bread,… , to the dance-eve. It was a really funny evening, as we were the attraction there (or at least we felt like that) – maybe because we increased the average age a lot. :D It was very funny, as on the one hand one couple always wanted to dance with us (so we stood in a circle and danced to the music) and on the other because even the “band” (two people) always commented what we were doing. (when we sat down they were like “oh, the young people are tired” and so on)

The next day we drove to Võru, where Tania joined us. – our plan was to go to the spa by foot, but suddenly it began so heavy to rain. (I felt like everything was wet – I didn´t knew that skinny jeans can become even more skinny)  So we decided to go there by bus. Finally in the spa the rain stopped and we had a nice afternoon there. :D As it then even became sunny we went back by foot. In the evening we had a great movie night, including karaoke, as we were watching “Mamma Mia!” with subtitles (to know the lyrics of the played song) :D it was very funny and I had a great time with the girls. <3

And then … May already started :O – I don´t know where all the time is :D